Too Close for Comfort

Battered from the double whammy of her husband’s death and caring for her aging parents, Sarah Creston thrills to Jen and Brett’s exquisite care and ravishing sex. Now that she’s had her first taste of a woman, will she be satisfied—or will she want more? Everything hinges on what Sarah wants.

Too Close for Comfort

Jen slumped down on their living room sofa as soon as she and Brett had walked the short distance separating their lot from Donna and Ryan’s. Brett hadn’t said a word since they’d left Donna and Ryan standing in their kitchen. She’d gripped his hand tight the whole way.

He rubbed circulation back into her fingers. “Would you like some water?”

She nodded. “Thanks. My mouth is parched.”

Jen watched him disappear into the kitchen and listened to the sounds of ice clinking against the glass and tap water running. Brett had warned her Donna wasn’t going to like the idea of Sarah Creston moving in, even if it was just for the summer. Why couldn’t Donna understand that Sarah needed time to adjust, to heal? It hadn’t been long since her husband died, and now she was dealing with aging parents who needed more care than she could provide. When Sarah initially contacted them on the swing website, they’d assumed that the proverbial unicorn had fallen in their lap. But Sarah had turned out to be much more—so much more.

“Guess I didn’t handle that very well.” She eyed Brett looking for judgment, but didn’t see any.

“You’ve had better days. Donna wasn’t very helpful either.” He shrugged. “We knew she’d be difficult. Ryan seems to be taking it more in stride.”

“We didn’t say we wouldn’t play with them at all this summer. It’s just I think it’d be more than awkward to keep our Wednesday dates while Sarah is living with us.”

Brett arched an eyebrow. “At least until she gets comfortable enough to want to expand her sexual horizons.”

Jen flinched. She didn’t have to tell him she wasn’t ready to share Sarah with Donna or with Ryan. “We’ll cross that bridge when we come to it. So do you think Donna will get over this?”

Brett shrugged. “You’ve known her all your life. You two have been through about every kind of crisis imaginable.”

“I didn’t imagine this one at all.”

“No, neither did I.” Brett sipped his water and plopped down in the easy chair across from her. “It’s probably best to let things settle for awhile. Sarah may not even stay more than a week or so. Ryan will work on Donna. You know he will. She’s always had a quick fuse. She’s the first to admit that, at least in her calmer moments.”

Jen nodded, fighting back tears. “I just wish she’d give us all a chance.”

Brett’s shoulders slumped. “Guess we all have to give us a chance.”

Jen winced. That was likely as close as her husband was going to get to criticizing her, at least when she was this vulnerable. He’d bide his time. Sometimes his patience frustrated her to no end. He knew—they both knew—that if Sarah became a permanent fixture in their lives, she’d have to also somehow fit into Donna and Ryan’s lives. But not yet.

Jen sighed. Why did it have to be so complicated? She knew in her heart she’d never cut off her relationship with Donna, not even for Sarah. But she wasn’t ready to tell anyone that— not even Brett, and especially not Donna. Damn, why couldn’t the woman be a little more flexible?

“True enough. You do remember Sarah said she wanted to see Donna gush.”

Jen frowned and shook her head.

“Oh, I forgot.” Jen laced her fingers together in her lap. “That was before…”

Again Brett arched an eyebrow. “Before you became so attached to Sarah?”

“I’m not attached to her.” Jen did her best to ignore Brett’s scowl. And why did he always have to have such a damn good memory? Now that he’d prodded her, she remembered Sarah being amazed that a woman could actually gush while climaxing. During their first visit Sarah had been very curious about how other women experienced being with women. She’d seemed less curious during the last visit. Perhaps by then she was satisfied with what she was discovering on her own.

“We’ll see,” Brett said at last. “I don’t want you hurt, Jen.” He crossed his legs and uncrossed them. “Hell, I don’t like seeing our friends hurt, either.”

“Of course, I will. But Sarah is her own person in all of this. She may not fit into our lives at all over time. We might just be a stepping stone on her journey.”

Jen tensed, certain Brett could see the blood draining from her cheeks.

“She may become too possessive.” Brett twisted his mouth in thought. “Or maybe she’ll be more like us than you realize.”

“Maybe she’ll be as intrigued and fulfilled with swinging as we are.”

“Do you really think she’ll swing on her own?”

“But you don’t believe that?”

“Who knows? Given how I saw her respond to her first taste of a woman, it’s hard to imagine she’ll give up women completely.

Jen wet her lips. “She was wonderful. I’m just so pleased I was her first.”

“I know you are. All I’m saying is I’ll be surprised if you’re Sarah’s only woman.”

Jen crossed her arms under her breasts. “I know that.” Her voice cracked. “No matter what you think or Donna or Ryan…” Jen felt her pulse quicken. “I’m not wanting to keep Sarah for myself. But she needs time.”

“Okay.” Brett exhaled softly. “Time is what you have. But I’m not sure Sarah’s timetable and Donna and Ryan’s timetable are going to necessarily match yours.”

Getting to her feet, Jen glared at Brett. “I know that, too, dammit. I’m going to go down and work on the computer. That might calm my nerves. I’ll do some grocery shopping this afternoon. I want us to have plenty of food items that Sarah likes when she gets here.”

“There always is. Together we’ll find it.” He kissed her forehead. “You might want to pick up some more candles and bubble bath soap. I have a feeling they’re going to be in demand over the next several weeks.”

“Thanks,” she murmured, letting him fold her in his arms. “This is so huge. I want to make it work, but I know we’ve got to also let it happen. However that is.”

“And that,” Brett kissed her lips lightly, “is what will allow things to work out okay in the long run.”

She nestled closer, well aware he hadn’t said anything about the short run. They both knew the short run would likely be turbulent. They’d already witnessed some of that turbulence earlier next door. 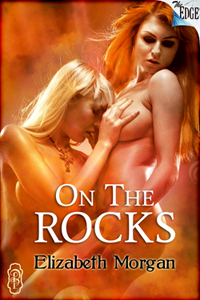 On the Rocks
Elizabeth Morgan
In Shelf
$1.99