An anthology of five erotic stories with mixed themes including ménage, older woman/younger man, exhibitionism and sex outdoors. Surgical Stockings by Mikey Jackson The very moment she met the doctor, she knew he was the man for her. The hunk was straight out of a romantic novel. A sparkling pair of grey-blue eyes. A spruce and orderly crop of dark brown hair. The athletic physique of a man who knew how to work himself into a sweat in the gym. Oh, and more importantly, a prominent bulge saying hello to her in the genital region of his tight black trousers. Ooh, yes. He was just what the doctor ordered! And she was about to swallow her medicine. The More the Merrier by Clarice Clique Emily is the decadent centre of every party. Everyone from policemen to waiters is attracted by her sexual allure. However, it is only her one-time roommate and long-term girlfriend who retains Emily’s attention. But after more than ten years their relationship is coming to an end. Emily is determined that it will not fade away but will explode in a whirl of threesomes and orgies. A short break in Lisbon under the warm caress of the Mediterranean sun is their last chance to act out all their fantasies and say a last apt goodbye to each other. Night of the Incubus by Valerie Alexander Ariel’s number one fantasy is anonymous sex. But just meeting men in her conservative small town is nearly impossible, let alone arranging a faceless encounter with a stranger. Yet when she bumps into a man in the woods one night – a young man who seems suspiciously similar in the dark to her neighbour’s gorgeous son – Ariel finds herself lost in the hot and wordless sex of her dreams. Icebreaker by A.J. Lyle Abby longs to step beyond the doors of The Vault, and discover all the adult toys that await her within. As she hesitates on the threshold of the shop, she collides with Cade, the sexiest man she’s ever seen. He takes her inside, to the welcoming attentions of salesgirl Jami, who gives Abby an unforgettable lesson in pleasure – but that’s only the warm-up, as Cade is delighted to get involved too … The Last Train Home by Carol Anderson When things got hot and steamy in the bathroom and Jake headed off to work, he left me begging for more. So, I really wanted to pull out all the stops when he came home and give him a night to remember ‑ shaved, wet, horny as hell, and dressed to kill, I waited in the dark for the last train home. 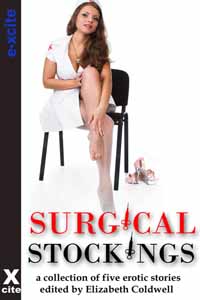 The remainder of the morning, although hectic and eventful, seemed to drag on forever. Roll on lunchtime, she mused, when the surgery would lock itself away from the world for half an hour. Mmm. Thirty minutes alone with her hunky doctor and his probing hands. Oh, and his stiff, fleshy thermometer, of course. She couldn’t wait. But in the meantime, she had no choice but to navigate her way through a chaotic storm of patients.
It felt like the whole town had suddenly become ill. Every disease, ailment, cut, bruise, scratch, rash, and broken bone known to mankind came stumbling, staggering, or crashing helplessly through those front doors. Or, failing that, wheeled in like human hostess trolleys, but without the chocolate éclairs.
Minutes felt like hours. And hours felt like days. Amidst a torrent of telephone bookings, computer data input and over-anxious patients with minor sniffles claiming themselves to be on the verge of death, she could feel her pussy pouting. Pining for her handsome doctor. Screaming out for some serious action. All it wanted to do was come out to play. Was it really too much to ask?
At last. Lunchtime arrived. Doctor Allcock closed and locked the doors. He pulled down the blinds, shutting out the threat of prying eyes. He then turned around and smiled. Veronica was sitting on the desk. Watching him. Waiting for his company. She beckoned him with her finger to come closer. So he did.
Eager lips pushed together in a seemingly eternal kiss as hands wandered freely around each other’s bodies. Veronica placed both palms upon his muscular chest, caressing the fruits of regular gym attendance. Allcock wrapped his arms around her slim waist, squeezing the small of her back through the thin cotton of her blouse with fervent fingertips. She folded her legs around his hips and tightened her grip on him, like she was a human vice. This doctor was not getting away.
She moved her hands onto his solid buttocks and clenched hard, bringing the man closer to her waiting body, so that his bulge met her bare pussy. He began to gyrate his pelvis, pressing his rock-hard lump against her muff, simulating his intentions toward her. She pulled out of the kiss and beamed at the man, gazing into his beautiful azure eyes, wanting him, needing him, craving everything about him.
‘Oh, Veronica,’ he whispered, volleying back a smile. ‘You are just what the doctor ordered.’
She responded with, ‘And you’re the only medicine I’m prepared to swallow.’
Yeah, yeah, so their exchanges were teetering on the wrong side of naff and cliché, she thought, but it was also good fun.
Allcock unbuttoned her blouse, revealing a pair of buxom breasts cupped in black lace. His hands fell upon them, fondling them, pressing them, pushing them together. Veronica found herself surprised by the warmth of his mitts upon her bare skin. The hands of a doctor were usually bloody freezing. But not his. They were hot. And so was he.
Curious fingers burrowed underneath her bra. He discovered her hardening nipples with ease and flicked them gently as he peppered her neck with licks and kisses. She liked his methods, loved them, and emitted a squeal of approval. Her legs wrapped themselves tighter around his hips, pushing the bulge in his trousers even closer to her treasures down below. In response, he gyrated faster, smashing himself into her groin, sending Veronica into a fizzy, fuzzy frenzy.