Too Cold to Love

Marco Giovanni has shut off his emotions following a messy divorce. His small daughter and his chain of bakeries are all he needs in his life. The string of nannies are an unfortunate necessity he could well do without. So why does his body have to remember its needs now with the latest and most unsuitable nanny ever?

Elise has always been the responsible one, so when she receives yet another SOS phone call from her wayward twin, she does the only thing she can do, she steps into her shoes. Having to go back to nannying is hard enough, the unexpected attraction to her arrogant employer is impossible to deal with. Especially when she is forced to agree to a marriage of his convenience to pay off the debt her twin accrued.

In a marriage based on blackmail can passion turn into love, or will secrets and lies destroy all?

Too Cold to Love

Marco's knowing gaze met hers in the bathroom mirror, and the heat she saw in his eyes started a slow answering fire deep within her. Awareness sparked between them.

The towel slowly slipped from her fingers. The ice hit the tiled floor with a thud and broke the spell. She almost ran into the other room and frantically tried the other door.

"I have it on good authority that they are fire doors, my lovely, so I'd give up now. I like your shoulders just the way they are, cara mia."

Marco leant against the door frame propped up by his good shoulder, his arms crossed over his chest, a slow smile on his lips. He checked the lock on the bathroom door.

"And I'm pleased to note there isn't a lock on here, lest you decide to go hiding in another bathroom. I seem to recall you were rather fond of that on our honeymoon."

Elise winced, followed by a vivid blush as she remembered their wedding night.

Marco simply smiled. He slowly advanced towards her, and Elise backed away until she bumped into the wall. He reminded her of a predator stalking his prey.

One last long stride brought him so close his thighs touched hers, and he put one hand either side of her head. His big body crowded her against the wall, and his sinful mouth hovered over hers.

His hot breath fanned across her face, and Elise closed her eyes. She bit back a moan when he kissed her nose and rained butterfly kisses along her jaw line. He suckled gently on just the right spot on her neck to make her knees turn to jelly.

Somehow she found the strength to put her shaking hands on his chest, only to meet hot, hard, male flesh. This time she couldn't stop the very feminine moan escaping. Was that needy sound really her?

Apparently so, judging by Marco's low groan in her ear. He moved his hand to cup her breast, the nipple thrusting shamelessly into his caress.

"You don't sound as though you want me to stop, cara mia. In fact, I would hazard a guess that you're wet enough for me to fuck you right here."

The crude words should have shocked Elise, but instead she whimpered in response to his words. He ground his hips suggestively into hers until the full force of his erection rested against her pussy. Heat flooded between her thighs, and she pulled his head down for kiss.

"You're talking too much, Tarzan."

She caught a quick glimpse of triumph in his glittering eyes before his mouth claimed hers. His tongue tangled with hers, and they both groaned. One of his hands fisted in her hair, and the other lifted her skirt. He cupped her mound and murmured his approval.

"You're so fucking wet for me."

He bunched the sodden material of her underwear in his hand and pulled. The move brought delicious pressure to her clit, and Elise panted in excitement. Cool air hit her slick folds when the material gave way with an audible rip. His large hand replaced the fabric, and her pussy clamped down on the fingers he thrust into her channel. His teeth nipped her neck, nudging her arousal up another notch, and he kicked her feet apart to spread her wider. She clung to his shoulders, rubbing her breasts against his chest, and he swore. He thrust two more fingers into her hungry cunt, and she lifted her leg to give him better access. He withdrew his fingers, and Elise tensed when he inserted one slick digit into her anus.

His eyes sought hers, and he smiled. He kissed her, and Elise relaxed into the strange sensation. When he inserted another finger into her tight hole, she gasped into his mouth. He thrust slowly in and out of her, and Elise pulled him closer to her still, as her hips moved of their own accord. Unused nerve endings sprang to life, and darts of pleasure skittered to her clitoris. Her breath came in short gaps, as her arousal built.

"That's my girl. I knew you'd like this." Marco's strained voice in her ear was the sexiest sound she'd ever heard. She pushed down on his fingers, seeking more, and moaned her disappointment when he withdrew them slowly. He grabbed her buttocks and ground her aching clit into his still covered cock. He thrust into her, and the friction on her throbbing bud proved too much for Elise.

Marco pulled away, and she groaned.

The heat in his ever darkening gaze stoked her arousal to fever pitch, and she impatiently tugged at his trousers.

His eyes darkened further at her whispered plea, and she breathed a sigh of relief when his hands helped her free his cock. It sprung out of its confines up to his taut stomach, and Elise licked her lips in anticipation. She cupped his balls, and it was Marco's turn to groan.

"Jesus, woman, you're killing me."

He pushed her hands away, and Elise arched into his palms, when he pulled down her tank top and exposed her breasts. He kneaded each aching globe, before he pushed them together and laved the nipples in turn. Every suckle sent shards of pure pleasure down towards Elise's clit where delicious anticipation built in waves. She moaned her protest when Marco released the glistening buds and kissed his way back up to her collarbone. She could feel his strained smile before she saw it.

"Wrap your legs around me. I need to get inside you right now." 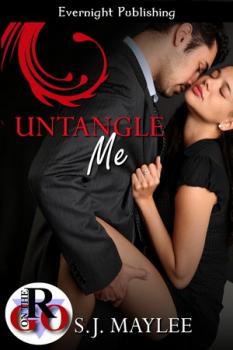 Untangle Me
S.J. Maylee
In Shelf
$2.99
Tweets by
sirenbookstrand