Surrender To His Command (MF)

Surrender To His Command is Volume 3 of the Surrender series, which continues the story of Surrender Inc., an exclusive sex resort / club franchise where the elite go to play. It is the first stand alone novella in the series, rather than a four part serial.

Rider Sykes is a dominant in need of practice, or so his clients tell him. Christy Tyler is a college girl working two jobs and falling asleep in class. When she meets Rider at her best friend’s bachelorette, she never guesses the tattooed bad boy will offer to hire her as his practice sub, but he shows up at her job the next day to do just that. However, Rider isn’t who he claims to be, and when Christy discovers his secrets and betrayal it may be enough to make her flee from this biker dom’s arms. 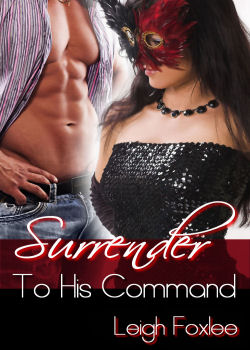 Surrender To His Command (MF)

“I dare you to pinch his butt.” Jeanie points to the nearly bare derriere of one stripper who’s sashaying in front of the bride-to-be, my best friend Felicia.

I nearly choke on my appletini. “No. You know my rule.”

She rolls her eyes at me, flutters her fake glittery lashes. “Yes, no more bad boys. Why can’t you just drink from the fountain without wanting to marry it?”

I blink at her odd, homemade idiom. “Look, some people can have one night stands and some can’t. I’m not a prude--”

“You just fall in love too fast.” She shakes her blonde wigged head at me. “Girl, you’d have a lot more fun if your heart wasn’t tucked between your knees.”

With that, she struts off toward the stripper sticking his thong clad naughty bits in Felicia’s face. I shake my head and watch them, wishing I could be more like Jeanie and Felicia, wishing I’d chickened out on this bachelorette and stayed at home with my cat and a book.

“But it’ll be fun!” Felicia had crowed when I tried to back out of her party. “And you’re one of my bridesmaids, so you have to be there.”

Felicia and Ron are getting married soon, and they’ve decided that for their bachelor and bachelorette parties they get one last fling. So strippers were hired and Ron pulled some strings to rent Felicia and her friends this room that’s a part of some sex club. Sex club! Can you believe it? Some place called Surrender Inc. apparently owns it, or so Felicia tells me.

Just great. Here I am tucked in a sex club with ample writhing, muscled male flesh and I’ve sworn off bad boys for good. Of course, a sex club is crawling with just that!

I glance up from where I sit wedged between Mary and Eve, two more college buddies who are in my historical law class. And wouldn’t you know it. One of the strippers is headed right for me, hips gyrating and penis edging closer to my face. I try to get up, but Mary and Eve hold me in place.

“The lady over there says you need a lap dance,” the towering brunette beefcake tells me.