An Angel for Them (MFM)

Randy and Travis Woods crave a family like they grew up in, but the ménage lifestyle isn’t for just any woman. When Angela Carter appears on the side of the road like an answer to their prayers, Travis, for one starts to hope. Will Randy try one last time for happiness?

Angela finds herself put out on the side of the road by her last boyfriend like so much trash. When Travis offers her a ride and a safe place to stay, can she believe that he won’t toss her to the side as well?

Then she meets his brother, Randy and realizes she has feelings for both men. The more she is around them, the harder it is to resist their gentle charms and heated gazes. Angela wants them both, but that’s just wrong? Right? Can a ménage relationship work, or is she asking for too much?

An Angel for Them (MFM)

Heat Rating: Sextreme
Word Count: 64,515
28 Ratings (4.1)
Contemporary Menage a Trois/Quatre Western/Cowboys
In Bookshelf
In Cart
In Wish List
Available formats
Mobi
HTML
ePub
PDF
Cover Art by Les Byerley
Reviews
I know I'm always going to get a good story when Marla writes it. Loved it.
rhondavb
This book has everything you could ever want. Hot men, with love that makes you want to be there woman. A great story which brings their woman from insecurity to confidence. It has a bitch who tries to cause problems, who gets what she deserves in the end. Will definitely look for more by this Author.
mattjakemeg
Read more...

Travis Woods slowed his truck to keep from hitting the garbage on the side of the road. Why did people insist on dumping their trash along the highway? It didn’t make sense to him. If it hadn’t been drizzling rain, he would get out and throw it in the back of his truck, but he didn’t really want to get wet. He passed the bag of garbage about the time that it moved. He slammed on the brakes and stopped. It was a good thing no one was behind him or he would have caused a wreck.

Had it been the wind that had moved the stuff or was there actually something alive in the bag? The idea that someone had put out a puppy or kitten on the side of the road in the rain angered him. He squinted into his passenger side mirror to see if it moved again. It did.

He quickly pulled over to the side of the road and climbed out of his truck. He carefully approached the bundle of whatever it was in case there could be a stray dog or even a coyote rummaging around in the trash bag. Instead, when he drew closer he saw that it was a person huddled with the garbage bag covering their body.

The bag jerked and a pair of legs emerged to scamper back from him. It settled well back from the road and huddled once again. From the size of the bag and the mass bundled up in it, he figured it had to be a child or maybe a small woman. He couldn’t leave them on the side of the road in the rain.

He carefully edged closer but stopped when the bag began to shake.

“Let me help you. I’ll give you a ride wherever you want to go. Maybe back to town?”

The bag slowly stood up but didn’t move closer. He smiled and held out his hand.

“Come on. You can ride in the backseat if you feel better that way. I won’t hurt you. Do you want to go back to town?”

A soft and definitely feminine voice spoke up for the first time. “Is there a shelter there?”

“Yes, there’s a shelter in Riverbend. Do you want me to take you there?” he asked.

“Please. I don’t have anywhere to go. He just put me out and told me to walk.”

“Well, let’s get you out of this rain and into the truck first. Then you can tell me what happened.”

She hesitated for a second then sighed as if all hope was lost to her. She slowly walked toward him. The tiny woman appeared completely dejected by the way she slumped forward. He felt nothing but sorrow for her. She finally made it over to stand in front of him. Then she looked up from beneath the garbage bag and his heart nearly stopped. She had the prettiest light-blue eyes he had ever seen. Sad blue eyes, but gorgeous just the same. They seemed to look right through him and into his heart.

“Thanks. I was too tired to walk any further.”

All he could do was nod and lead her to his truck. When they made it to the door, she stopped and seemed to contemplate where she wanted to ride. Finally she moved to the front of the truck and started to open the door. Travis snapped out of his daze and quickly opened the door for her. She pulled off the garbage bag and dropped it on the ground. He was so bedazzled by her head of golden-red hair that he didn’t even bother to pick it up and throw it in the back of the truck.

Her hair was just as pretty as her eyes. Even wet and tangled, nothing could hide the truth of how amazing it would be dry and combed out. It hung in sodden clumps around her shoulders, reaching just below her shoulder blades. He ached to reach out and touch it, but he restrained himself since that would surely send her screaming in the opposite direction of him and the truck.

With a bit of effort, he managed to close the door without touching her. Then he circled around the front of the truck and climbed in the cab. He pulled a blanket from the backseat and handed it to her. Then he put the truck in drive and turned around in the middle of the road to head back to town even though all he wanted to do was take her home where he and his brother Randy could take care of her. His brother would flip at seeing her in the shape she was in. They treasured women and would never allow one to get into the sort of trouble she seemed to have found herself.

“I’m Travis Woods. My brother, Randy, and I own a ranch outside of town. Would you tell me your name?”

“Angela Carter. My name is Angela. Thanks for helping me.”

“That’s a pretty name, Angela. I don’t mind helping you one bit.” He glanced over at where she sat huddled near the door, hanging on to the blanket and the seat belt like a lifesaver. “Want to tell me what happened?”

“My boyfriend decided he didn’t want to be saddled with me anymore and put me out on the Interstate. I knew better than to walk there, so I took the first exit I came to, and here I am.”

“I can’t imagine any sane person just dumping you in the rain on the side of the road. That’s plain criminal.”

Travis almost slammed on the brakes again. He turned and looked at her then back at the road.

“You’ve been walking since yesterday? Where did you sleep? Have you even had anything to eat?”

Angela clung to Travis, marveling at the sensation of skin against skin. She loved the feel of it beneath her hands. Then he settled her back in the middle of the bed and Randy climbed between her legs, pushing them as far apart as he could get them.

“Ah, hell, Travis. Look at how pretty this pussy is.”

Travis stood behind his brother and smiled down at her. “It’s the prettiest one I’ve ever seen. How does she taste, brother?”

Randy leaned in and lapped at her pussy juices. “Better than the finest wine. I could make a meal off of her and never be satisfied that I’ve had enough.”

Randy returned to devouring her juices as Travis climbed on the bed and buried his face between her breasts. He licked one nipple while rubbing the other one between his finger and thumb. After a while, he switched sides, as if to make sure they received equal treatment. He licked and sucked each of them then moved higher to capture her mouth with his. The more she moaned, the deeper he took the kiss until she felt as if he was eating her alive.

Pleasure built deep inside her cunt as both men filled her with their love. As Randy slowly built the pressure to come with his mouth and fingers, Travis increased the sensations by pinching and pulling on her nipples. Soon she was writhing between them. When Randy pulled her clit between his teeth and stroked some special spot deep inside of her with his finger, Travis pinched her nipples and demanded that she come.

“Let us have it, Angel. We want to hear you scream for us.”

She did. She couldn’t have stopped it if she’d tried. Wave after wave of delicious sensation poured over her and inside of her until she thought she would pass out from the intensity of it. When she finally came back to herself and could speak around the panting, she grabbed a handful of their hair in each hand.

“That was amazing. Oh, my God, I’ve never come like that before.”

“We’re going to top that, honey,” Randy said as he slowly climbed up her body.

He rolled over, pulling her with him. She found herself straddling his waist, the hard thickness of his cock pressed tightly against her clit. She couldn’t stop the shiver of awareness that poured over her at the feel of his thick cock. When had he pulled off his jeans?

“Put me inside of you, honey. I want to feel your hot cunt squeezing me.”

Angela lifted up and grasped Randy’s thick dick and slowly lowered herself onto him. He filled her in a way no one had ever filled her before. His massive shaft touched places that had never been touched before. Randy’s hissed-out breath told her that he was feeling the tightness just like she was.

She couldn’t stand it any longer. She needed to feel all of him inside of her. She pulled up then slammed back down on him all the way.

Her hissed-out yes could barely be heard over Randy’s roar. He grasped her hips and held her still as he panted below her.

“Are you all right?” Travis asked from behind her.

“Mmm. Better than all right. Move, Randy. Fuck me. I need you to fuck me hard.” 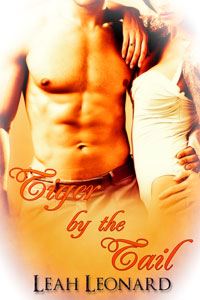 Tiger by the Tail
Leah Leonard
In Shelf
$3.99