This collection includes scenes from: 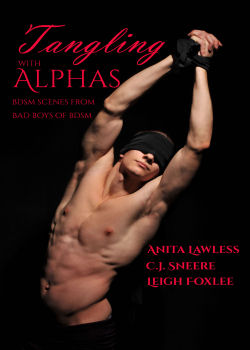 Grabbing the handle on the nightstand before he could say another word, Bekka wrenched open the small drawer and brought out two long, dark silk scarves. “Go for it, darling.” She flashed him a saucy grin as he took the filmy material from her hand.

“You trust me enough?” He grinned sideways and stood, walking toward the dark oak headboard to tie her hands to the posts.

Bekka laughed. “I trust you, baby. I trust you implicitly.”

Corey cinched the scarves tight around her wrists and then dragged a callused finger down her left arm, to where her full breasts pooled in round, delicious mounds against her chest. His fingers circled her large nipples then pinched and teased. Wrapping his hands around the supple flesh, he squeezed her breasts hard and she groaned, arching up to meet his urgent touch. Corey’s mouth joined his hands and he sucked and bit her nipples until her slit was soaking and Bekka mumbled urgent, breathy commands beneath him.

“Damn,” she murmured. “Maybe letting you tie me up wasn’t such a good idea.” She thrust upward with her hips…