Centuries after the destruction of Earth, destiny is being fulfilled and plans are in motion to restore not only the Earth, but mankind, to its former glory. One family is fated to bring about this amazing destiny. One man puts it all in motion, the day he crashes onto the wolf-planet of Tumaro and meets his mate.

Talon Versuthion always knew that some kind of way, life was going to screw him over. His parents died when he was just a boy and he can't remember a thing about them. He was adopted by a great family only to have them tell him that he is a Vermithian, one of the most despised humanoid species. Even worse than that? He has no idea that a prophecy was made about his family, one that mentions that someone from the Versuthion family will bring back a pure human race. And there are people out there who will stop at nothing to make sure that never happens. No matter what. While on a delivery for the GPA with his adopted sister Josie, however, Tal's space shuttle crashes onto Tumaro, the notorious wolf-shifter planet. Tal is lucky to be alive, though Josie can't be found. He is desperate to find her, but destiny steps in and history is changed forever. Because the Alpha King of the planet, Blazell Roughshire, is Talon's mate. And before the two men can even settle into their new relationship they must deal with conspiracy, murder, kidnapping and a centuries old plot to completely eradicate the human race. Will Blaze be able to keep his mate safe from those who would see him dead? Is Tal truly the only one left from his family who can fulfill this centuries old prophecy? And can Tal, who has made it a point to never fall in love with anyone, open his heart and let Blaze be Passion's hero?

NOTE: This is a previously published work. Over 22,500 words have been added to the original. The title, author, and/or publisher may have changed. 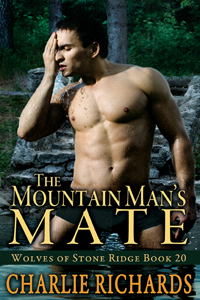