The Butler Did It

The Butler Did It by Roger Frank Selby

A female butler hides her sexuality beneath the stiff formality of the role and the heavy, masculine uniform. Until one morning, she finds all her cover stripped away, revealing her sensual, womanly sexuality in all its beautiful glory...

A wife shows her husband just how pleased she is to have him home by paying him very special attention during a long, lingeringly sensual night of love.

The Pirates by Carmel Lockyer

Lucy and Laurie are twenty one year old identical twins. Identical that is, except in terms of their sexual preferences: Lucy likes men, Laurie likes women. When the two of them agree to act in a production of The Pirates of Penzance Lucy soon ends up in bed with one of the swarthy pirates. Laurie, however, is left waiting, unsure whether or not her feelings for the sexy pirate queen are reciprocated...

Melissa is sexy, voluptuous and liberated and is used to getting what she wants. So when she meets sweet, quiet, politically-correct-vegan Justin, she thinks seducing him will be a piece of cake. But appearances aren’t always what they seem and Valentine’s Day turns out to be full of surprises.

Moistened by Mercer by Jeremy Edwards

Flirtations and sexual tension run through office life and Mercer is more aware of this than anyone. He gets off on the thought of making the women around him wet, although he never knows for sure whether his charm works. Until one day he finds himself alone in the photocopier room with a friendly colleague...

The Butler Did It

‘Sir?’
‘The hot towels, please, Reynolds. Miss Bradley can go first.’
Reynolds held open the vast towel. Alison stepped out and turned to face John as Reynolds dried her back and legs. In the heat Reynolds was working without her jacket and Alison had already noticed that the butler wasn’t wearing a bra under her blouse.
John must have noticed too. Alison opened her eyes wide when she saw the monster rising out from the bathwatery depths.
Despite his state of arousal he was a perfect gentleman as always. ‘Reynolds, thank you … We will be fine …’
‘No.’ Alison was as firm as her boyfriend was becoming. ‘It’s all right for Reynolds to stay. Your turn next, darling.’
John shrugged his shoulders and grinned. ‘Me next, then, Reynolds, if that’s all right with you.’
‘It’s perfectly fine with me, sir.’
He stood up and stepped out of the bath, as erect as a man can be. Reynolds stared at him, her mouth slightly open.
Well, if Sheila still has penile phobia, this is the moment of truth, thought Alison. She watched, enthralled, while John’s back and legs were vigorously towelled, as if he were a stallion being rubbed down in the stables. She saw the beautiful feminine motion of Sheila’s half-hidden breasts in time with John’s manly swing. She became more aroused than she had ever been in her life. When she spoke, her voice was thick with desire. ‘Let me lend a hand there, Sheila.’ She dropped her covering towel and fell naked to her knees before him. Grabbing a small hand towel she started to dry every inch of the man. Sheila watched the kneeling woman at her task. ‘Come down here,’ said Alison. ‘I’ll show you how to dry him thoroughly.’
‘Are you sure, madam?’
‘I’m quite sure.’ Sheila slowly knelt down beside her. Alison pushed another small towel into her hand. ‘It’s very important to make sure he’s dry here behind his balls, right at the root of his cock. Open your legs a little please, darling. That’s right, Sheila, lift them gently and dry behind. There, see what I mean?’

John felt the towel and the light touch of female fingers, saw his cock reaching out over the kneeling women.
‘Yes … that is perfectly clear, madam.’
‘Call me “Alison” for a while, Sheila. Let us all call each other by our first names. And please let me help you out of that hot blouse.’
He saw Sheila’s arms lift as she pulled off the blouse herself; saw her perfect breasts moving freely.
‘Now don’t you say a word, John. I want to show you off to my good friend Sheila. Now, Sheila, hold on to his cock with both of your hands.’
Sheila reached out, touching him very lightly at first, then holding him with growing confidence. He revelled in her touch as she gripped him more firmly.
‘Now, Sheila, I want to show you off to my male lover, John. You have been hiding the most beautiful pair of tits a woman can have. I want you to let my lover touch them.’ He needed no further encouragement. He leaned forward, filling his hands. He felt the yielding weight of the breasts of the kneeling woman; let his thumbs feel the darker, up-standing tips. He could see the reflection of him fondling her body in the bathroom mirror.
‘Do you feel him reacting to your lovely body, Sheila? Feel how hard he is, how hot he is. Press his cock hard against your cheek.’ 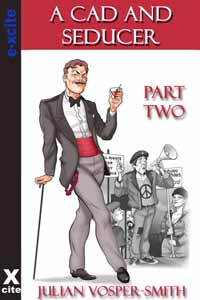