With Sahn-Tah Keelas on his honeymoon, the Christmas Dragon is going to have to deliver all the toys. Too bad he doesn't have the Oldest Elf's stamina, he collapses on Maggie's front lawn and has some severe explaining to do.

Will she believe that the flying lizard means no harm even after he shows her his naked and helpless and hunky human form? Time for strategic application of the Santa hat.

Shaking her head at the fanciful turn her thoughts had taken, she moved away from the dragon prints and off to the stand of trees. The first tree was too tall. The second was too lopsided. The third reminded her of her fourth grade teacher. The fourth tree was just right. Six feet tall with a big bushy base. She started hacking at the base and it shook snow on her with every stroke. When it dumped down the back of her shirt, she squealed and jumped back. Dropping her axe, she shook it out as best she could with her parka in the way.

"What is it? What is wrong?" The deep baritone hummed out of the darkness.

Maggie shrieked and looked down for the axe. It was deep in the snow and she couldn't get it out in a hurry. "Who is there?"

"Syrus. We met this morning." He came out of the shadows to meet her wide-eyed gaze with his own.

"You are dressed. I distinctly remember you being naked." She was stupefied. His dark shirt and pants looked centuries out of date and yet perfectly suited him. His hair blended with the fabric and framed his face. She was going to say more when the tree she was working on shifted alarmingly. She squeaked in surprise when he swept her into his arms and away from the falling pine.

"Why are you chopping a tree in the dark? It is most unwise."

"I started when it was light. I would have been done if you hadn't surprised me." She was a little defensive and mildly irritated that the thickness of her clothing kept all contact with his body in her imagination. Damn it.

"You are very light," he said it almost absently as he shifted her to one arm and grabbed the tree with the other. "Where did you want this tree?"

"Ideally, in my house in one piece. It's my Christmas tree. Tomorrow, I decorate it and put the presents my friends gave me under it."

He began striding to her cabin, her cradled with one arm and the tree with the other.

"I will retrieve them later. A holiday tradition isn't something to die over and you cannot see in the dark like I can." Irritation coated his tone and he stopped at her door.

She could opened it for them. Inside, he slid her down his body, the puff of her coat seemed to frustrate him so he removed it. Maggie shucked her gloves and touched his skin for the first time. She cupped his jaw line and stroked his flesh, amazed at the smoothness of his skin. No five o'clock shadow or trace of a beard dared to interrupt the texture of his skin.

She traced the outline of his wide mouth with her fingertips and his tongue flicked out to touch her, taste her. Evidently he liked what he tasted because he sucked her fingertip into his mouth and twisted his dexterous tongue around it. He stroked her digit for a moment and then released her.

"I see you are less frightened of me this evening."

"I have decided that if I have gone insane I am going to enjoy it."

"Well, far be it from me to deny you your hallucination."

Apparently, for an imaginary dragon, that constituted foreplay because he lifted her up and wrapped her limbs around his waist, then walked her to her bedroom with his erection rubbing against her clit through her jeans. 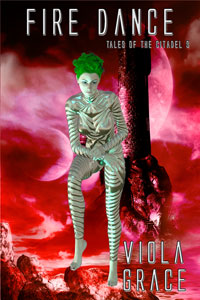 A Force of Three (MFMM)
Becca Van
In Shelf
$2.99
Tweets by
sirenbookstrand