Lost in a snowstorm, Brielle of Brightwater prays for the Goddess Eliana to save her. Her deliverance comes from an unlikely savior, with obsidian skin and ominous, leathery wings. Despite his appearance, she’s convinced he’s an angel, sent to her by the Goddess.

Alric Flievve is Genessa, a race of beings from another world. He’s been banished for a crime he didn’t commit, and is fascinated Brielle sees him as anything other than a demon. It isn’t long until their friendship grows stronger, and forbidden passions abound.

But their love is challenged when the doorway to Alric’s world opens, and two Genessa from his past step through. Hell-bent on death and destruction, they target Brielle, and they’ll stop at nothing to see Alric suffer. When their dark, horrible magics twist Brielle’s soul, can Alric’s own power overcome their hate and jealousy before she’s lost to him forever?

“Was this a temple?” she asked, taking a few steps and glancing around her. She trembled, not at the cold, but at the thought of turning and facing the one who’d saved her from the storm. Instead, she looked at every stone before her, trying to place the god this temple had once been built to worship.

“Yes,” came the rich, deep voice of the one behind her. It sent a wave of excitement down her spine. He was still with her. He hadn’t disappeared. She’d thought he might leave once she was safe.

“I have never heard of this place before.”

Her angel was silent for a moment before he spoke. “It has not always existed in your world. This temple is from my world.”

His words got her attention. From his world? Brielle tucked her hair behind her ears and licked her lips nervously, knowing now was the time she should turn and face him. Any longer delay would be rude. With her hands balled into fists, she swallowed hard and spun slowly where she stood, gazing deliberately at her angel’s feet. They were bare and black as night.

With a gasp, Brielle lifted her eyes, taking in the short-cropped silver breeches he wore, which seemed molded to his muscled form. He wore no shirt, but that wasn’t what shocked her the most. His skin was as black as pitch, the color of coal. Piercing silver-blue eyes regarded her from his dark, handsome face. Once their gazes locked, she found herself hard-pressed to rip her eyes away. Even his hair was a deep shade of black, as well as his leathery wings, which he held folded against his back.

His lack of clothing shocked her, but only because the night was so very cold and he’d been very, very warm against her. She itched to touch him again, just to see if his skin still retained its heat.

Long moments of silence passed between them. She knew she should be embarrassed for staring, but it wasn’t every day she saw an angel, and she wanted to remember this moment for the rest of her life.

“You are not frightened.” His voice filled the ruins and echoed all around them, as if the walls themselves couldn’t contain it.

“Should I be?” she asked in a small voice. She took a step back regardless.

Her angel wasn’t a man of many words.

He arched a brow at her, and she took that moment to truly study him. His face was indeed handsome, with striking features and perfect ivory teeth. His nose was straight, his lips were full, and his hair was thick and glossy, curling slightly at the nape of his neck.

He took that moment of her inspection to unfurl his wings, stretching them behind him as far as they would go. At their full span, their tips almost touched the ruined temple walls.

“You are amazing,” she said without thinking.

Apparently, he hadn’t been expecting that. He took two steps forward, which brought him before her. Heat radiated from him, warming her to her bones.

“You truly are not frightened.” His words were filled with awe and wonder, as if he’d expected her to run from him.

“Why would I be frightened of an angel?” 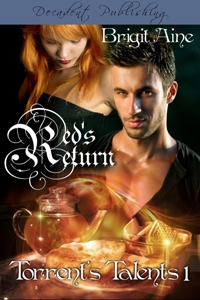