The Collaring of Camilla

Tales of hidden and forbidden sex in Victorian London, when a handsome stable boy often groomed more than his master’s favourite horse in the afternoon, while the mistress of the house was holding a secret teatime lesbian spanking party for her lesbian friends. High society in the “Naughty Nineties” is the setting for gay and lesbian fun and frolics, when a wanking resulted in a spanking and men thought clitoral pleasure was a nervous malfunction. 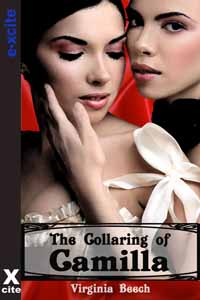 The Collaring of Camilla

To her horror, it was Guinevere who was the willing recipient of such lewd attentions from this darkly beautiful daughter of a deceased officer of the Bengal Lancers and his Calcutta concubine.

This was no surreptitiously stolen stable kiss. Guinevere’s riding habit was hitched up over her creamy thighs, her knickers pulled down to bare her rounded bottom. It bucked in fetching provocation; the quivering cheeky curves clenching and unclenching in rhythmic fury, as she responded enthusiastically to Alysha’s finger-fucking. Guinevere’s voluptuous breasts hung free of their constricting bodice and Alysha was tonguing the lust-hardened nipples in hungry debauch.

Maude watched with gut-wrenching jealousy as Guinevere reached a knee-trembling climax beneath the finger squelching lasciviously within her cunt. She came, shuddering to the ecstatic surges that coursed from her inflamed clitoris to every nerve-tingling extremity of her body. Alysha knelt and buried her dark face to Guinevere’s love lips, her serpentine tongue lapping the sweet-flowing nectar of her come juices.

Guinevere was Maude’s star riding pupil at Victoria’s, the select Academy for orphaned “daughters of fallen heroes” situated off Berkeley Square in Mayfair. Formally opened by Queen Victoria when she was proclaimed Empress of India six years previously in 1876, the Academy charitably housed 30 indigent young ladies aged between 18 and 20, preparing them for a secure, if somewhat Spartan, spinster life as a governess.

An accomplished equestrienne under Maude’s attentive instruction, Guinevere looked magnificent riding side-saddle in Hyde Park’s Rotten Row each morning when they exercised the Academy’s horses. Maude had long secretly lusted to possess her. In the confines of her bedroom above the mews stables behind Victoria’s, she dreamed of tasting the sweet delights of her body, of baring Guinevere’s bouncy breasts and sucking her nipples to excited hardness. She fantasized about Guinevere’s hidden pearl nestling within that lush, curly forest now so wantonly displayed before her, dreaming of the girl becoming her live-in stables assistant, when she would possess her in nightly Sapphic sensuality.