He hadn’t expected it. Not at all. And yet there it was, Laurent De Berger’s heart wish was a…impossible! And to think he had done it by the book, have sex in a dusty ghost town saloon with Anthony and Renée on Halloween night, only to find out…no, he still couldn’t believe it! But since there was no going around it, what to do now? 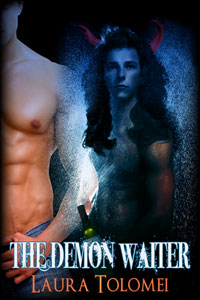 Following the old man’s gaze, Sallas steered his attention to a group of well-dressed human-like skinny young men and women. They were all dressed in black, with clothes more in fashion during the Nineteenth Century rather than modern age. Most had long hair and very pale faces with bloodshot eyes, but nothing unusual about them that would warrant Sallas’s interest. Then one of them went to the prison and picked a man and a woman after a careful selection. The guards had no objection to his taking the two away, and Laurent braced himself ‘cause they weren’t destined for a happy ending.

Once brought to the rest of the group, for a moment nothing happened. Everybody simply circled around the two, looking them up and down with a strange light flashing in their eyes. Then they jumped all together, like a pack of wolves on the two victims, mouths slightly ajar from which pointy white teeth gleamed malignantly. Assaulting the innocent victims, their razor sharp devices sank in the flesh, some on the throat, others on the chest, and sucked the life out of them. In a matter of seconds, it was gone, the dead frames falling to the ground while the group licked its lips, already scrutinizing the prison for the next energy drinks.

“But why can’t I hear their screams?” Laurent wondered out loud, noticing more than one opened his mouth wide before collapsing lifeless.

“Because the piano swallows their sounds and turns them into music.”

“So the fingers and the headless man—”

“They’re just for show.” Sallas nodded gravely, gesturing at the fingers leaving for a tour of the saloon in the direction of the bar counter. “Without terrorized screams the piano would be silent.”

“It’s the punishment the fools deserve for meddling where they don’t belong and never will ‘cause the dark arts are for very few enlightened spirits. But cheer up.” With a broad smile, Sallas patted his back. “Not all our tortures are so terrible.” The old man directed his attention to the opposite side of the room.

A completely different scene unfolded before Laurent. Instead of blood and death, an orgy was in progress. The men and women chosen for what looked like a completely separate event seemed pampered rather than brutalized. Interestingly enough, the protagonists on this side were the devilish Lilliputians. They were devoted entirely to blowing cocks, licking cunts and butt holes, helping any demon wanting to have fun with a human. Sometimes they serviced their masters, too, their astonishingly long tongues wrapping like an endless rope around some of the biggest erections Laurent had ever seen. Not just long, but large, way beyond anything a human male could hope to achieve, not even through surgery. And they used them surprisingly well, too.

Whether preying on a man or a woman, they’d stick their incredible pieces with an expertise that made Laurent think they did nothing else all day long. If the pigmy spread the cheeks apart, they would plunge in one single thrust all the way to the balls, so fast Laurent sometimes didn’t catch the moment of entry. Still the hole enlarged in the blink of an eye to a size it would never know in the human dimension. Others drilled slits while their acolytes held arms and legs to prevent the woman from moving. In this case, the demons had a grand time switching holes, going from one to another rapidly and with such powerful shoves Laurent wondered how they didn’t split their partners in half.

Men had better deals, everything considered. The midgets would often lap their cocks while they were either impaled or gagged by the monstrous equipment pushing down, or up depending on the direction. More devils provoked humans’ desire to a spasm. Having their tiny assistants lick a cunt or suck a dick without allowing a come, Laurent could testify to the devastating effects on the poor victims, squirming and begging for release. For all response, the monsters would stick their erections in his or her mouth, suffocating their frantic pleas.

Unable to avert his eyes, Laurent watched the variety of shafts penetrating derrières, cunts, and mouths, some to the point they actually came out the opposite end. Like in his wild fantasies, the demons managed to grow such long shafts they actually emerged from a throat, even if banged up an ass. And he didn’t think it was at all pleasant for the people assembled orgy-style on the floor, their yellowish fluids somehow mixing with the reddish ones to make a ghastly sticky pool in the middle of the room.

Twisting among the demons inflicting such pains and pleasures, Laurent saw two very familiar snakes doing their best to transform sex into a weapon. “But those are—”

“Yes, you knew them as Anthony and Renée in their human forms. In reality, they’re sex demons and very powerful ones, too.”

“What’s a sex demon?” It was all new to him, uncultured as he was in the black arts, never having been interested in learning about something his rational nature refused by definition.

“It’s someone whose sole objective is to turn humans into their sexual slaves and suck their vital energy until nothing remains.”

“So that’s what they were doing to me!” Now he understood the obsession, the inability to stop and also the sense of tiredness he felt away from them.

“Actually, you’re very strong. Usually they work alone and can finish a human being within months. With you, instead, they had to pair up, but still couldn’t finish you off. And in the end you beat them.”

What Once Was Lost (MM)
Lynn Hagen, Stormy Glenn
In Shelf
$0.99
Tweets by
sirenbookstrand