When, out of desperation, Bran Caspar takes a job in a women's designer shoe store, little does he know he's just entered a world of secret shoe fetishes and a string of cafés designed to cater to a man's every whim and secret obsessions. It's a world that turns out to be deadly but highly compelling, especially with a certain "maid" named Rick.

For Bran's best friend, Finn, the prospect of a new business is a pleasant distraction from his horrible breakup with his lover, Waldo. And speaking of which, where is Waldo? Right inside The Fetish Café, looking for more than a cup of coffee.

Will these best friends find happiness at the end of their shift, or will they, too, become victims of The Fetish Café? 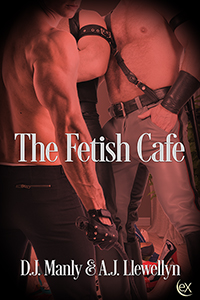 “Are you intending on doing your cat routine?” Bran felt a little weak looking at Rick.

Rick came and sat beside him. “Maybe. I have a client coming who likes that sort of thing. Do you like it?”

“Thanks. You have…” He trailed off as Rick’s hand slid higher.

“Everything. Everything about you is…” Bran snaked his hand up around back of Rick’s neck and pulled him forward. Their lips met, hot and electric, oh yeah. “I want to fuck you so bad,” Bran groaned against his mouth.

Rick reared back. “What’s stoppin’ you?” His chest was heaving.

“Fuck what Finn says.” He sniggered. “He can join us if he wants.”

“I bet he would if we asked,” Rick suggested, his gaze going to the tent in Bran’s pants.

Rick grabbed his hand and pulled him to his feet. “Let’s ask him, shall we?”