Arthur Penner is more than happy to aid a lady in need of help, especially if the woman is targeted by his nemesis Vance Hollister. The fact the lady in question turns out to be not only a powerful witch, but a gorgeous red head with a wealth of curves that don’t quit? Even better.

What he isn’t prepared for is the discovery that the woman just happens to be his reincarnated Queen Guinevere, and worse, she has no memory of who he is.

His well-ordered life is crumbling around him as yet another surprise turns up in the form of his reincarnated sister. It seems the past is swallowing him whole, forcing him to let go of previous betrayals and trust once more.

Gwen McAllister finds herself between a rock and a hard spot. Drawn to the quiet strength and confidence of Arthur. It isn’t until her memories are savagely restored by a vengeful goddess that she realizes who she is and the bitter betrayal she caused. Even her familiar, a mouthy Himalayan named Salt seems to be against her, demanding she trust the very man she destroyed..

A new threat is rising, one which will plunge the world they know into darkness. To defeat an old enemy they must depend on each other and learn to forgive. A tall order and time is running out. Can they let go of the past and embrace the promise of a future or will they lose everything in the ultimate battle between good and evil? 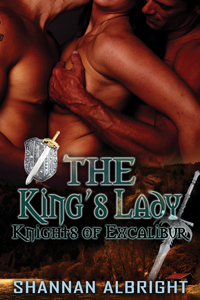 More From Knights of Excalibur

Perhaps it was the cold calculation in his gaze, which swept over her from head to toe, leaving her with the familiar sense she didn’t meet his standards. Or the fact something about him waved a huge red flag with the words wrong in big and bold pinged through her mind.

Whatever the cause she couldn’t ignore the soft clang of warning bells sounding off in the back of her mind.

First impressions being of utmost importance—or so her aunt Carlotta always said—this man was sadly lacking in her opinion. Which happened to be the defining reason she stood on the other side of a locked screen, magical bag of weapons at the ready.

The soft brush against her ankles drew her attention to a rather large and very demanding familiar. With snowy white fur long and lustrous, the Himalayan eyed their unwanted visitor with an air of disdain only a cat could manage.

With a twitch of his whiskered nose, he turned his blue gaze on Gwen. He smells wrong to me, Wen, don’t trust him.

Now for anyone else the idea of a talking cat would freak them the hell out. For Gwen being a witch and all well, not so much. I couldn’t agree with you more Salt. I just wonder what he really is after, she concurred on the telepathic link the two shared.

“Miss McAllister, I’m afraid I have rather distressing news that would better be given to you inside.”

Right, fat chance of that happening, buddy. She gave him her sweetest smile. “You can say what you wish from right there, Mr. Hollister.”

She had to bite the inside of her cheek to keep from laughing at the irritation that sparked in his dark eyes.

“I have news of your Aunt. She charged me to see to your safety.”

The first stirrings of unease settled in her stomach. “What about my aunt?”

“I’m afraid to say she was murdered yesterday.”

Shock careened through her at his words making her head buzz and heart lurch painfully in her chest. She had to have misunderstood him. If Carlotta passed she surely would have felt it. Wouldn’t she?

Salt can you sense Lottie? She sent to her familiar, silently prying to Hecate this nasty man was wrong.

Wen, I don’t get anything, but a blank where she should be.”

“Murdered you say. How…why?” Gwen barely got the words out past the lump which suddenly lodged in her throat.

“This discussion really needs to happen inside.” He pointed out with a hint of his growing impatience.

She didn’t trust her voice to speak at the moment so she unlocked the screen door and opened it. Perhaps not the smartest move, but she needed the info and something told her the guy would withhold what she needed until he got in.

She followed him as he moved past her and into her small living room. She blinked back the tears and tried not to think about how truly alone she found herself now. With Carlotta gone, she had no one left. Her aunt being the last remaining link to her parents who drowned in a boating accident when she was just a baby, Carlotta raised her, was the closest thing to a mother she ever had.

How had Carlotta died and who would ever want to kill her? Those questions rattled around in her stunned brain, circling in a repetitive pattern. She needed to stay calm, there would be plenty of time to fall apart once she was alone. Alone, what a frighteningly lonely word that suddenly became. Grief swelled in her chest and for a moment, she couldn’t draw a breath. Emptiness latched onto her, threatening to swallow her whole.

“I think you should sit down. You look like you’re ready to pass out.”