Hiding in plain sight is a skill that Lucia has learned to perfect. Born with extraordinary Otherkind talents that could be considered both a blessing and a curse, Lucia is one of the rare few of her kind, and as such, she is a prize that the Shadows find they just can't resist... 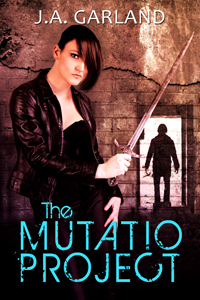 He gave her a minute to catch her breath. “Why are the Trackers trying to kill you?”

“What are you talking about? They aren’t trying to kill me.”

“Unless I’m missing something, honey, the only other person who knew you were going to the Wharf was Carlos.”

“Don’t call me “honey” and those men could have followed us there.”

“You think I drive aggressively for shits and giggles? I drive like that because if anyone dared to follow suit, I’d fucking know it.” She pursed her lips in silence.

How well did she know Carlos? Pretty damn well for him to take her call. “What’s going on between you two?”

Her eyes narrowed. “What are you trying to say?”

That she was a beautiful woman, and behind every beautiful woman hid a dirty secret. “That it’s a little odd the head of the Tracker Division would take a personal call from you. Either you’re in some very big Otherkind trouble, or there’s something going on between you two.”

“I don’t like your tone or your insinuation, and I don’t have to listen to it.” She straightened, her shoulders squaring.

“You misunderstood me. This isn’t a negotiation. You aren’t going anywhere until you tell me what’s going on. Those two assholes got a mighty good look at me. I’m done if they go through the Otherkind database.”

“Why are you done? You playing on Team Shadow now?”

Lucia’s gaze followed his and he saw her realize he stared at her uncovered stomach. She glared at him and yanked down her shirt. He groaned inwardly. That only made the top dip dangerously low across her firm, and rather well-endowed breasts. Damn, did she have to wear such a get-up? It was cruel, really. And distracting. Her “assets” had caused him to forgot rule number one through eighty—never let down your guard. “No. I’m not a Shadow. But anyone with security clearance will be able to find me in the Tracker database. Every scar, tattoo and birthmark was carefully catalogued.” She looked like she was going to ask why, so he gave it to her. “Contrary to all the lovely things you’re thinking about me, darling, it’s because I used to be a Tracker.”

If possible, she glowered even harder at him. Her face saying he could add liar to that list. “I thought you said you weren’t a Tracker.”

“Had you asked if I had ever been a Tracker, I assure you my answer would have been significantly different.”

“Semantics. You knew exactly what I meant.” Hands on her hips, she demanded, “Can I have your cell phone again, please?”

“Shit.” Anyone who knew two things about surveillance could use the phone’s internal GPS to trace its always broadcasting signal back to the exact lat and long where they stood.

“We need to ditch my phone and start moving. Now.”