But things are about to change. Investigative journalist Jennifer Best, acting on a tip from an informant, submits herself to be taken, accepting an education program. And now Shane Courtney has a new scheme—make Jennifer fall in love with him, his aim to gain complete control of her.

Warning: This book is considered Dark Erotica. In keeping with this genre, the book contains lurid sexual scenes that may be disturbing to some readers. 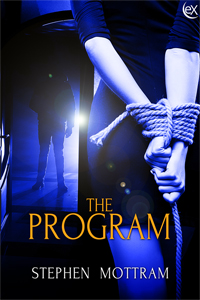 Jennifer Best drove her car slowly into the city car park. It was late at night, so it was dark as she drove upward to level four where she was to meet her latest informant. Jennifer had been an independent investigative reporter for several years. Her stories, filed under her cover name of Heather West, had uncovered numerous frauds and corruptions within her home city of Melbourne, the capital of the state of Victoria. As a city of some 4.5 million people, Melbourne was a thriving metropolis, so crime and corruption were rife.

Heather West’s success as a journalist had made Jennifer a lightning rod for whistleblowers. Her latest tip had come from a woman who had hinted of systemic corruption within the legal system and, once exposed, would create a major scandal. Jennifer was enthused about their upcoming meeting. If her source was accurate, it could be her biggest coup, making her a fortune and spreading Heather West’s fame nationally.

Jennifer was thirty-three years old, athletic, attractive, and ordered. Everything had to be perfect in her life. From her appearance to her home, all in its place, dictated by her very nature.

Jennifer loved her occupation, its freedom, and its adventure. Her sharp mind and investigative skills had given Heather West some measure of notoriety and, although Jennifer’s neat, ordered attractiveness would be perfect for the public media, she shunned the public spotlight, except on the one occasion. Due to her obsession with personal neatness, Jennifer’s clothes were tailored. Her tailor was so enamoured by the way her hourglass, elegant figure had showcased his clothes, he had offered her a good deal of money to front his advertising campaign. After some hesitation, she accepted. Although the campaign was a roaring success, she did it only the once. As an investigative reporter, it was imperative her identity remained a secret. Plus the actuality of having her ordered life invaded had abhorred her, this disdain for publicity the reason she had originally invented Heather West.

She filed all her stories from her home, selecting the appropriate publication for each particular revelation. Therefore she was completely independent, something she treasured above all else. All the editors had Heather West’s mobile phone number, which was separate from her own, and one of them had given it to her latest informant. Very daring, Jennifer’s bravery and willingness to immerse herself in her stories had given rise to her amazing success. She was, indeed, an intrepid warrior.

The car park was sparse as she turned into level four, the darkness of her surroundings giving her an ominous feel. A torch in a dark corner flashed at her. Jennifer drove to the secluded corner and got out of her car, walking to her informant. Before her stood a tall, slender woman who was at least six foot in height with her heels. She wore a trench coat, her hat pulled low on her head, and large dark glasses, her face expressionless. She looked extremely nervous, on edge, as if she were ready to take flight.

Jennifer smiled and proffered her hand as she spoke. “Hi. I am Heather West.”

The tall lady shook Jennifer’s hand before returning it to her trench coat, remaining silent.

Fuck, she is petrified.

“You spoke of corruption within the legal system. What do you have for me?”

She spoke hesitantly, with a low, alto tone. “The diversion program, are you aware of it?”

“It is being abused, used for exploitative purposes by those in power.”

“Exploitative? In what way?”

“Pornographically? Have you any proof?”

Her informant remained on edge, looking around nervously. “I was a victim. I have a story to tell, but I face a large prison sentence if I am exposed. That is why I am being so secretive.”

“I was driving along, well under the speed limit, when a police wagon, you know, one of those divvy vans, turns his flashing lights on behind me. I pulled over. I thought nothing of it until the policeman walked up to me and ordered me to step out of my vehicle. Then without warning, he handcuffed my wrists behind me.”

“Handcuffed you? What was your response?”

“I asked him what was going on and he told me was acting under information.”

“Information? What did he mean by that?”

“I had no idea. I was terrified. I have never been in trouble before, not even a speeding fine.”

“He checked my glove box and pulled out a quantity of pills, drugs, in a plastic bag and starts reading me my rights.”

“When did all this happen?”

“Four months ago. It has taken me some time to find the courage to contact you.”

“Why is that? What happened to you?”

“I ended up spending ninety days in a private residence, restrained day and night.”

“Fuck me. Who did this to you, and what reason did they give?”

“It is a so-called education course, part of a diversion program approved by a magistrate.”

“Why on earth would you agree to that?”

The tall lady became emotional, sobbing as she continued. “I had no choice. It was either that or ten years in prison for drug trafficking.”

“But what about your attorney? What did he say?”

“I wasn’t allowed to talk to him. If I did, they said they would immediately charge me with trafficking, making me ineligible for the diversion program.”

Christ. What bastards. The poor girl had no hope.

“So it was either take the program or fight the greater charge?” said Jennifer.