The Spirit of Christmas (MM)

Brandon and Jeremy’s met just before Valentine’s Day. It’s Christmas now and their relationship has progressed to something that Jeremy hopes will become permanent. Due to a relationship that ended badly for Brandon, Jeremy isn’t sure his boyfriend’s ready for that type of commitment yet, but he’s willing to wait. He’s surprised and pleased when Brandon asks him to move in with him as soon as he completes renovations on the old Victorian house that has been in his family for generations. Jeremy definitely wants to live with Brandon, but not necessarily in that house. There’s something strange about it that makes Jeremy uncomfortable. Even Sam, Brandon’s Border Collie doesn’t like to go inside the house. Brandon doesn’t understand Jeremy’s feelings, declaring that he never senses anything eerie there. He insists that it’s just Jeremy’s imagination working overtime, but Jeremy knows that it isn’t, that it’s something more. Will Jeremy’s aversion to the house ultimately end their relationship, or will they have a spirited Christmas and come to an understanding?

The Spirit of Christmas (MM)

Jeremy was sitting on the sofa watching the local news when he heard Brandon’s key in the lock. He’d expected Brandon to be home over an hour before, and he was furious. There was nothing worse than waiting for someone and what had started as a mild aggravation had worked itself up into a full-blown fury. This was their first Christmas together and Jeremy had been looking forward to picking out a tree and decorating it together. He loved Christmas and he loved Brandon, so this was going to be a special holiday for him. Why isn’t it important to him like it is to me?

When Brandon walked into the living room with a sheepish look on his face, Jeremy felt his anger dissipating. It was always like that for him. All he had to do was see Brandon’s face and all the love he felt for the man just washed over him, melting his irritation away. He was such a pushover. And Brandon fucking knew it. Well, not this time, lover. Jeremy crossed his arms and raised his eyebrows. “Is this what you call being home early, because I sure as hell don’t.”

“I know, babe. Time just got away from me.” Brandon walked over and sat down beside Jeremy. “I’m sorry, but…”

Jeremy leaned away, attempting to avoid any physical contact and interrupted with, “No, no buts. You knew that I was looking forward to this, that it was important to me, but it wasn’t of any great consequence to you, apparently.”

“Yes, it was. And is. I was just trying to finish up some stuff, and it took longer than I expected. I’m truly sorry, but I was doing it for us.”

Jeremy felt like Brandon was sincere in his apology. He’d come to know Brandon really well in their months together and knew that he wouldn’t say he was sorry if he didn’t mean it. Honesty was important to him, and he didn’t play games. Brandon was what he’d call a straight shooter. Probably because of his former boyfriend. Brandon had had only one long-term relationship and it hadn’t ended well. Apparently, that guy had cheated on Brandon multiple times, which, for the life of him, Jeremy couldn’t understand. God, if you’ve got Brandon, why in the hell would you want somebody else? And because Brandon had sworn off any kind of commitment, it seemed to Jeremy that the other man didn’t like having to answer to anyone about his time or anything else.

The fact that he didn’t seem to mind with Jeremy made his apology more significant. Jeremy felt himself melting. Damn it.

He looked up into Brandon’s green eyes with a half-smile. “I hate you. You know that, don’t you?”

Brandon chuckled and reached out, pulling Jeremy close for a hug. “No, you don’t. Never have, never will.”

“Oh, you’re so damn sure of yourself.” He pulled away again. “Now, what’s this shit about ‘doing it for us’? What does that even mean?”

“It means that I’ve finished all my projects on time, and the only thing I have left to do is work on the house, so now I’ll have more free time. I was hoping to have it finished so that we could spend Christmas there, but I’ve been so busy I haven’t had time to work on it as much as I’d planned. The downstairs is pretty much done, though, so I thought that we could at least invite our families over for Christmas Eve. Have an old-fashioned Christmas. I remember how beautiful the old place looked during the holidays when I was a kid.”

“Yeah, that would be nice, I guess.” The house had been in Brandon’s family for several generations, and he loved it--Jeremy, not so much. It was an old Victorian that Jeremy had to admit was beautiful, but he always felt uncomfortable there for some reason.

“Your enthusiasm is underwhelming. Don’t tell me you still think the old place is haunted.”

“I never said haunted exactly. I just said that I feel weird when I’m over there.”

“Jeremy, you know that I want to live there when the renovation is done. And I’d hoped that you’d live there with me.” 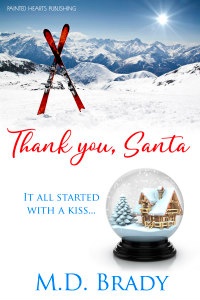