The State of Montana

From Maxim Jakubowski, one of the great authors writing in erotica today, comes an updated STORY OF O for the electronic age. In his gripping, heartbreaking tale -one with the modern zest of Bunuel's BELLE DE JOUR- a Montreal housewife seeks to fill her emptiness through anonymous encounters in Internet chat rooms, airport hotel bars... and bedrooms. Her adventures ultimately lead her to a terrifying sexual saga in a New York brownstone. Previously a major success in the UK, the USA, France and Italy and optioned on several occasions by the movies, this provocative novel stands amongst Jakubowski's best. 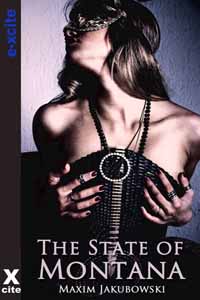 The State of Montana

‘I’m from Detroit. My name’s Anthony. Tony, if you prefer.’
‘Mine is Belle de Jour,’ she replied.
He was silent for a moment, digesting her words.
‘That’s certainly unusual,’ he answered. ‘Rings a bell somehow.’ He laughed quietly, suddenly realising his involuntary pun.
He looked Montana in the eyes quite solemnly and asked, 'It would feel odd calling you Belle. I accept your discretion and the use of an alias but, won’t you tell me your real name? Please?’ he pleaded.
She steadily held his gaze.
‘Montana. My name is Montana,’ she revealed.
The man smiled broadly.
‘That’s also pretty unusual, but it’ll do.’
She smiled back at him.
In turn, he looked the carefully groomed young blonde woman up and down. She certainly was a striking specimen, he thought. The jacket of her suit was partly unbuttoned and unveiled the outset of her cleavage. She didn’t appear very opulent but he did wonder whether she was wearing a brassiere underneath. Something told him she wasn’t. She crossed her long legs and he heard the unmistakable ruffle of nylon against nylon and skin. Her eyes were pale green, her lips thin but bright red. She didn’t appear to be wearing any other make-up. She continued to smile back at him, enigmatically, indulgently.
A host of contradictory thoughts and questions swirled across the man’s mind. A woman in a hotel bar, attractive, with a touch of class but not really the type, surely?
‘I’m available,’ she said softly.
‘You mean …?’ His glass froze in motion between the table and his mouth, as her sudden statement took him by surprise.
‘I mean I’m yours if you want me.’
He set his glass down without taking a further sip of water.
‘You said you had a room upstairs?’ she asked.
Maybe she should have accepted his civilized offer to have a bite to eat first, but now they were in his hotel room.
The man suggested she help herself to anything from the mini bar while he quickly tidied away the clothes and thick files that sprawled across the bed, but Montana declined. She stood there watching him, reflecting on the anonymity of all hotel rooms and the curious universal smell that emanated from them. She couldn’t put a finger on it. But it was the same, whether luxury inns or cheap motels, it was always the same. Maybe it was the smell of sex, she reckoned. The fragrance bequeathed by the hundreds of couples who had fucked in this small enclosure, the solitary men and women who had masturbated wildly in the privacy of the room to personal memories of times past, daydreams of partners who would never be or to the Technicolor images of tawdry magazines or the pay-per-view erotic channel on the television set in the corner.
On a desk next to the TV set lay a laptop computer, a model she wasn’t familiar with.
Montana wondered what Martin, her virtual London lover, was doing now. Probably about to leave his office, she guessed.
She knew he always worked late. He was also a man who travelled much and spent many hours in hotels. Had he ever been in this room? Touched a woman here, stroked his cock with thoughts of her?

A Cowgirl's Pride
Lorraine Nelson
In Shelf
$3.99
Tweets by
sirenbookstrand