Divorced, forty-two year old club member Joni Spencer is hiding feelings for the new twenty-six year old assistant golf pro heartthrob Jeff Nieman. When a golf lesson leads to a dinner date and a night of unbridled lovemaking, Joni and Jeff must confront the challenges their age difference and Jeff’s harassment by older women members at his previous club present for them. Just as Joni and Jeff’s relationship is about to strike a “sweet spot,” Joni mistakenly interprets a hug and embrace Jeff receives from a female employee. Can Joni overcome her error in time to avoid losing Jeff and her future happiness? 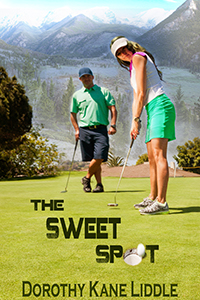 More From The Games Lovers Play

“It’s farther away now than before I hit it,” she moaned to her playing partners gathered on the 18th green. Her shoulders sagged, as she loped indifferently to where her ball had finally stopped. “A miserable end to a miserable round.”

“You need that putting lesson,” Margaret offered. At fifty-two, Margaret was the oldest of the women in the foursome, and, Joni thought, the wisest as well.

Joni shook her head as she bent down to mark her ball. “I don’t know if lessons would even help at this point. I swear today’s been like I’ve never played the game before.”

Margaret glanced over to Beth and Diane, the other playing partners, who both looked back at Margaret and nodded.

“That’s golf,” Margaret said, placing her ball down and picking up her marker. She took one quick look at her line and then calmly and easily stroked her twelve-footer dead into the center of the cup.

Smiling, Margaret walked to the hole and picked up her ball to compliments of nicely done and nice putt from all her partners.

“Maybe you should give me the lesson,” Joni said.

“What, and miss the opportunity to have Jeff’s arms around you to show you the proper setup?” Beth said, as she putted next and left her par putt on the lip of the cup. “Crap,” she muttered, and swiped the ball up angrily. “That was for an eight-nine. Would have broken ninety for the first time this season.”

“That’s okay. You still shot Margaret’s age,” Diane said, as the others cringed at her lame joke.

“And if you’re lucky, you’ll get the chance to shoot my age one day, young lady.” Margaret’s mocking retort was good-natured, though Margaret noted that only Joni got the double-entendre. Ten years older than Joni and twenty more than Beth and Diane, Margaret had nevertheless become a regular playing partner and a social friend to the others, following their meeting during their golf club’s group lessons program two years ago. Margaret served as the surrogate mom for Beth and Diane, and had become well-versed in all the good and bad of their relatively young marriages.

“Well, I need to make this for a ninety-five,” Joni said, lining up her putt and then sailing it a good four feet past the hole.

“Jeesh,” she said, glaring at the ball. “I can’t believe how much I stink at this game anymore.” She walked over to her missed putt and, not even bothering to line it up, nonchalantly knocked it in. She looked derisively at the hole and said, “I do better not trying at all.”

They finished up on the green, with Diane making her short bogey putt and a round of a hundred and five. They removed their visors and shook hands all round.

“Oooh,” Beth retorted. “Get a look at Ms. Sorenstam over here.”

“And how many birdies did you make today, Margaret?” Joni asked. “Like four?”

To Joni, Margaret was more like a big sister, but one she adored.

“Well, that’s two more than I managed,” Joni said, as they marched off the green, their bags in tow in their pull carts behind them. “I think even Diane beat me today.”

“No way,” Beth chimed in. “She never beats anybody.”

Diane stuck her tongue out girlishly at her best friend.

“It’s not about winning or beating anyone,” Margaret said. “It’s about camaraderie and the fresh air.”

“I don’t keep track of such things,” Margaret returned airily.

“Four,” Joni said, as they filed through the pro shop on their way to the grill room and bar.

“Often,” Beth piped her reply, smiling brightly, before anyone else had a chance to answer the handsome, sandy-haired heart throb. At least that was the way Beth had described him any number of times since Jeff first arrived at the club at the start of the season. She extended her smile back at Jeff well past the bounds of appropriate cheerfulness, as Margaret nudged her gently onward to the grill room.

When the four glasses of wine—two white and two red—arrived, Margaret took a sip of her Cabernet and said, “You really need to stop flirting with him, Beth.” Her tone was firm but not judgmental.

“There’s nothing wrong with a little innocent flirting,” Beth defended herself. “It helps keep you young. And who said I was even flirting?”

At that, all three of the others rolled their eyes.

“Rick used to say that,” Joni said with a distant tone. “And then one day, he announced he was divorcing me and marrying his assistant.”

“Well, Josh flirts all the time and I don’t mind it,” Beth said.

“Oh, puhlease,” Diane said. “You’re on the phone to me complaining every time your husband so much as looks at another woman.”

“You should talk,” Beth shot back. “You’re the most jealous person I’ve ever met.”

“Girls, girls,” Margaret said, and clinking the side of her wine glass like a toastmaster. “I think we should change the subject from men and husbands to something that’s more fathomable, maybe? Like maybe how we can improve all of our golf games?”

Either not hearing or ignoring Margaret’s suggestion, Joni took a sip of her Cabernet and kept her eyes lowered to her glass as she asked, “How old do you think he is?”

Beth felt Diane’s sharp kick under the table before she could finish.