The Taste of Lust, A Story in Two Parts (MF/ MM)

A Story in Two Parts…

Two giant Easter eggs and a surprise for a ward full of kids...that was the plan. But when Dr. Dan Reilly mysteriously finds himself one Easter egg down he has no choice but to go straight to the man they call 'Mr. Chocolate' and beg for another.

Mr. Chocolate is more than willing to give Dr. Dan what he needs, after all who could possibly say no to that level of hotness? But he wants something in return and the only question is whether or not Dr. Dan is willing to give it to him...

Meanwhile Dr. Robert is struggling with his own problem. Trapped inside one of the giant eggs he has no choice but to call out to his sexy as hell neighbour for help. Samia has lusted after the hot medic for weeks. She's plotted a million different ways to get her hands on his stethoscope but the right opportunity has been stubbornly elusive. Until now.

Before the night is through Dr. Dan and Dr. Robert will come to realize that surprises can take the most unexpected turns, and sometimes the very thing you have been looking for has been right under your nose all along.

Re-release of previously published title. Story has been updated for TEP. 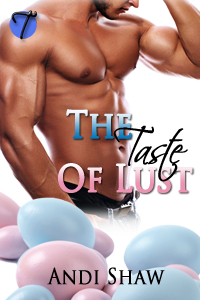 The Taste of Lust, A Story in Two Parts (MF/ MM)

“It’s a relief I bet,” she said, the smile finally reigning free and creasing her face. Robert was unbelievably tempted to reach out a hand and run his finger over those creases.

He grinned right back. “You have no idea.”

She tilted her head and eyed the egg, before fixing her gaze on his. “How long have you been in there?”

He shrugged. “Maybe an hour. Before your show started, put it that way.”

A look of puzzlement chased the smile away. “My show?” she asked.

“That thing you watch every Friday night,” Robert said. “With the weird theme tune.”

“I didn’t realize you could hear it through the walls,” she said slowly. “I mean, sure, I hear things too, but…”

Robert found himself wondering exactly what Samia had been hearing over the last few weeks. Dan, his roomie, had brought quite a few men home during that period. Robert himself had taken to wearing heavy headphones to drown out the sounds of passion that came from across the hall.

“Are we too loud for you?” he found himself asking.

“By ‘we’ you mean…” Her eyes widened and she shook her head. “It’s none of my business, but of course not. I’d have said otherwise.”

The word stretched between them and Robert watched, in something like fascination, as Samia caught her plump bottom lip between her teeth. He looked down, almost involuntarily, and saw that her nipples were stiff as rocks. Was Samia imagining the sounds of passion were from him and Dan together? Did that idea arouse her he wondered?

“So what were you even doing in there?” she asked, bringing his thoughts back to the present with a resounding start. 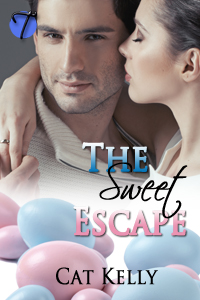 What Happens in Vegas (MMM)
Taylor Brooks
In Shelf
$2.99
Tweets by
sirenbookstrand