Some things are worth waiting for.

Abraham Chadwick is locked in a state of quiet desperation. Not only has he never been kissed, he’s never even been in love. Indeed, as Abraham prepares for college, he’s beginning to fret that he may stay a virgin forever. Fortunately, the sudden arrival of a handsome Southern gentleman into his world gives him a new sense of hope. Will Abraham finally find the love and affection that he’s so desired for so long? 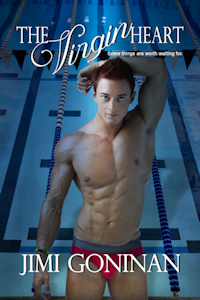 It was almost the end of the first week of school and things seemed to be going as they always had for Abraham – classes, swim training and no miraculous arrival of the perfect match into his world.

Behind Abraham, the wide hallway was bustling with the customary sounds of students making their way to class, banging locker doors and calling out to one another amongst the constant babble of conversations. Abraham was turning the combination to his locker when he felt the unexpected sensation of a strong, warm hand touch his upper arm.

“Pardon me,” asked a deep, confident voice with a distinct southern drawl, from beside him. “Can ya help me?”

He’s gorgeous! Who is he?

“Y...yes.” Abraham was so nervous he was surprised he hadn’t lost the power of speech completely.

“I’m Lincoln. I only just transferred here from New Orleans and I’m a bit lost. Can ya tell me where Mr. Peterson’s English would be?”

“Oh, that’s right beside my next class. It’s not far.” Abraham’s heart fluttered wildly in his chest and he desperately hoped that he didn’t look as flustered as he felt. “I can take you there if you like?”

“That’d be mighty kind of ya, thanks. What’s your name?”

“Guess we were meant to find one another then,” remarked Lincoln laughing.

Lincoln gave a brilliant flash of white teeth in a smile that traveled all the way up to his kind brown eyes. Befuddled, Abraham found it exceedingly hard to concentrate.

“Our names…Abraham and Lincoln.” Lincoln explained in an expectant tone.

Ergggh, why am I so dumb? He must think I’m a complete moron!

“Sorry, lame joke I know,” said Lincoln, in a charming show of self-depreciation.

“No, it was funny…Guess I’m just a little slow today.”

As they walked, Abraham sneaked several furtive glances at his new companion; very much appreciating the way Lincoln’s electric-blue polo clung to his decidedly muscular torso. His eyes were also drawn to the extra-large red sneakers Lincoln was wearing.

If his feet are that big then maybe his…

Abraham pushed the thought aside before he became noticeably aroused – an embarrassingly easy occurrence of late given his unrequited yearnings. All too soon, for Abraham at least, they reached the door to the classroom.

“Well…this is it,” said Abraham reluctantly.

“Thanks, I really appreciate your help. It’s awful tough being new. See ya ‘round, Beau.”

Beau? Did he really call me, beautiful? Nobody calls me that…well except for mom but she doesn’t really count. He was probably just making another joke I didn’t get.

Lincoln flashed Abraham another warm, dazzlingly white smile before he turned and went into his class.

Damn the back of him is just as hot as the front! I have no chance.

Abraham’s face heated with an almost overpowering combination of embarrassment and arousal. In a bit of a daze, he slowly turned and made his way next door for his French class with Madame Perchet – a razor-thin, gray-haired harridan of a woman who seemed to take great delight in mercilessly chastising those who dared massacre her beloved language.

The rest of the afternoon whisked past in a veritable blur for Abraham, and it would be safe to say that he absorbed absolutely nothing from his lessons. Every time he tried to focus on the class, Lincoln’s smile would reappear and everything else simply faded away.