Tough times need hard men, and Mace is the perfect tyrant for dystopian times. Werewolf alpha and president of the Hellhounds MC, he runs Wolf County with an iron fist. The penalty for breaking the law is death. But Mace shows unexpected mercy and becomes possessive over the incubus that did his people harm.

Echo hitchhiked his way across the apocalyptic-torn country, feeding on the lust and desperation of others. After Mace lets him go, Echo is captured by slavers, and returns to Wolf County by unexpected means. No matter what he does, Echo can’t seem to fill the vast emptiness inside him. What better way to go, than die at the feet of a dominant male capable of taming his troubled soul?

Echo’s pull on Mace is inevitable, but is their attraction real or manufactured?

Standing so close, Echo felt Mace’s member pressing up against his stomach and his own need for release. Mace could have taken him back there, could have rolled him and taken what was rightfully his without asking. Mace didn’t exactly show restraint, but he went for the next best thing. He compromised. Mace didn’t know he’d opened a door, a path Echo suspected both of them were shit-scared to find out which way it led.

Would whatever existed between them—Echo wouldn’t go as far as to call it a relationship, because it wasn’t there yet—eventually kill them both, slowly and surely? It was a merciless world out there. Mace’s reaction in the parking lot spoke volumes. Would Echo weigh him down and eventually drag him to the dirt?

Mace’s eyes narrowed. “That’s a lot of fucking blind faith you’re putting in me. Didn’t your mother ever teach you not to trust strangers?”

“A stranger doesn’t put his life and livelihood on the line for another. A stranger wouldn’t crash into an armed rig to reach me.” Echo ran his hand down Mace’s left pectoral and lingered near his ribs, where old scars barely covered the Hellhounds MC insignia. “Black deeds might have painted your reputation red, but your secret’s safe with me.”

“What secret is that, little demon?” Mace’s dangerous tone would have sent most men running, but Echo stayed his ground.

“I can see the real you, Mace. Beneath your armor, you can be decent too.”

Mace’s figured blurred. He didn’t see the alpha press him up against the tiled wall or pin his hands above his head. Echo drew a shaky breath.

“This. Us. We’re fucked up.” Mace said those words, but that didn’t stop him from nosing his way up Echo’s neck. His tongue swirled over the spot again, compulsively and obsessively.

Echo burrowed his fingers into Mace’s hair, encouraging him. “Do it, Mace. Give your mark to me.”

Mace growled. Echo felt the scrap of his slightly sharpened canines prickling his skin. “You don’t know what you’re asking.”

“You really want to bind your soul to mine? To a fucking killer with no morals?” Mace asked, locking his golden gaze with Echo’s. Whatever he saw there made Mace hesitate.

“Don’t you know? You already staked your claim and made me yours the moment you ripped a path to my cage,” Echo said. “You know what, big guy? I’ve never been certain of anything in my life, but I’m sure of you. Of us.”

“I’ve already said my piece. I’m not the one with regrets or uncertainties.”

Mace glowered at him. “There’s no going back after this, little demon.”

“Only forward. Take me, Mace. Make me officially yours.” 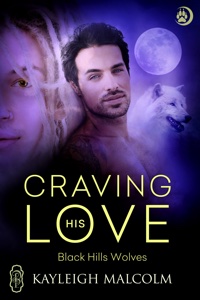 In Need of an Alpha (MM)
Marcy Jacks
In Shelf
$4.99
Tweets by
sirenbookstrand