Just when she thinks her only solution is a tell all memoir, a snowstorm puts her in the path of stunningly handsome, insanely rich and equally intense, Tucker Lewis.

Tucker remembers Maggie well. They once shared a mind-numbing kiss at the annual St. Mary’s carnival when her boyfriend wasn’t looking. No stranger to scandal, he looks past public opinion to the submissive craving a master’s touch and decides then and there what he wants. He’s going after Maggie and her heart’s kinkiest desires.

Unfortunately, no amount of money can change the sins of the past and when they’re certain they know everything there is to know about each other, one discovers a secret they aren’t prepared for.

5 Stars "Tucker's Fall is the exciting and outright sexy start to a new series from Eliza Gayle. I've read the other series that this series is connected to and enjoyed them immensely." ~ Long and Short Reviews

Tucker Lewis stared into the crowd and wondered when it would all end. He tightened his grip on the shot of Jameson and brought the glass to his lips. Across the bar and generous play space, fake smoke, dancers in chains, and throngs of half-naked partiers filled the club. The intense edge of the Lords of Acid music and the occasional scream of a submissive from the far side of the room fit right in with his dark mood. For better or worse this was the place he’d needed to be tonight.

The Purgatory club had come to be in a different life for him and the longer he sat here watching the scene around him; the less he believed he belonged. Of course his self-imposed exile hadn’t helped much. He’d been riding high on life on borrowed time and didn’t even know it. All it took was a simple house fire to bring his world crashing down.

Yanked from his mournful thoughts, Tucker focused on the man standing in front of him. Tall and imposing, he wore black leather that emphasized a gleaming baldhead that drew women of all ages. It didn’t surprise him that his old friend from better days and one of the best damn rope riggers on the planet stood there with a smug grin.

“C’mon, Tucker. You know I’m not your type. But maybe this one is.” Leo tugged on a leash he’d been holding and a very pretty redhead cautiously stepped out from behind him. Even with her eyes cast down, it didn’t take much for Tucker to recognize her nervousness. Her hands intertwined with each other repeatedly as she shifted her weight from foot to foot.

Long, red hair brushed the tops of ample breasts that were barely hidden by a thin, black nightie that stopped before her thighs began. But it was the thick leather collar at her neck, branded with two names that stood out to him.

“I see things have changed for you since I last visited.”

“Tends to happen when you disappear from the face of the Earth.” Leo clapped his shoulder and took a seat on the bench next to him and his lovely submissive went to her knees on the floor at Leo’s feet.

Tucker tried to ignore the slight pang inside him. It had been a long time since a submissive had caught his eye but that didn’t mean the desire to have one of his own had completely disappeared.

“Will you introduce me to your lovely?”

With what looked like some reluctance, the little subbie lifted her head and met his gaze. “Hello, Master Tucker. It is nice to meet you.” Immediately her eyes lowered back to the floor.

“You’ll have to excuse Katie this evening. She’s had a tough time with her commitments lately so Quinn and I have decided to devote this entire week to her correction.” Leo stroked his pet’s hair and brushed her cheek when she turned toward him.

The pang inside him clamored louder. The affection between Master and submissive was so obvious it was difficult for Tucker not to experience some degree of jealousy, although settling down had never been in his previous plans. “No need to excuse her. I completely understand.” Maybe it was time to get back into the scene. He could meet a willing submissive here at the club and work out some of the kinks that had plagued his art this week.

“You thinking about rejoining us? Maybe some play tonight?”

Tucker shrugged, amazed Leo had read his mind. Tucker’s body warred with his mind for control. Part of him definitely needed to move on, but the other—well, he wasn’t so sure.

“I’d be happy to offer Katie for service tonight. I think it would do her some good. She needs to get her head in the right place for everything she will be put through this week. What do you say?”

Tucker considered the offer while staring at the top of the pretty sub’s head. She’d not uttered a word or made a move except for the tiny shudder he’d detected along her shoulder line when Leo offered her services. She impressed him and that wasn’t an easy thing to do these days.

He stood from his seat and positioned himself legs apart in front of Katie. Leaning down he cupped her chin and titled her head back until her gaze met his. “I have a feeling I would enjoy your service very much.”

She swallowed before a small smile tilted her lips. Whatever trouble she’d been having it was obvious how much she needed whatever Leo wanted to give her.

“It would be my pleasure, Sir.”

A part of him really wanted to enjoy Katie. To take part in her discipline and let go of some of the stress he’d endured lately. His self-imposed exile needed to come to an end. He wasn’t his father’s son anymore. Unfortunately, his body had a mind of its own and wouldn’t cooperate like he wanted it to. Flashes of another lovely lady filled his head. A woman he’d not actually laid eyes on in over fifteen years. Maggie Cisco. Professor. Newly single. Closeted submissive.

He’d bet every last dollar that Maggie possessed the heart of a true submissive, longing to take her place at her Master’s side and he’d waited her out long enough. Her reappearance eight weeks ago had sparked more than gossip. Something inside him akin to hunger had unfurled and dug in with razor sharp claws and refused to let go. His recovery had taken a very long time. Too long. Now he needed to rejoin the world, engage in a healthy if somewhat temporary relationship and he’d chosen Maggie to do it with. She didn’t know it yet, but he was coming for her. 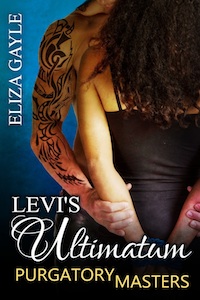