Under the Desert Sky

Under the Desert Sky by Zee Kensington

Lipstick in the Rain by Michael Bracken

During a routine traffic stop for a busted taillight, a closeted small-town cop finds himself frisking a female impersonator dressed as Courtney Love, and it soon becomes evident that the cop has more in mind that just writing a ticket. What the cop doesn't know is that the driver he's pulled over has an ulterior motive for lifting up his dress and bending over.

The Sculpture by Tabitha Raine

The Sculpture is the story of artist, Jason, who is carving a bust of a new client Quentin. Jason can't help being utterly turned on by his stunning subject and breaks his self imposed rule of fraternising with clients. A steamy studio romp ensues and the finished sculpture turns out a little different than the initial brief... Soldiers of the Night by Landon Dixon

The Roaring 20s. War on the noir city streets, gangland-style. But as the lead flew and the booze flowed, there was still time for night moves, man-assault of another kind – sexual combat, gang-bang style. America was on the gayest, gaudiest spree in its history, and the soldiers of the night were at the forefront of it all. Without Words by Josephine Myles

Nick thinks it’s worth the risk of getting his head kicked in to find out if the gorgeous redhead on the building site really is checking him out. Only trouble is, even if he is interested, Nick tends to end up spoiling things with his nervous babbling. This time he’s going to have to keep his mouth shut. It's either that or he’ll have to find some other way to occupy it...

Honey Do Me by Patrick Myers

When Lon discovers a handsome handyman he didn't hire repairing the gutters on his house, he turns the mix-up to his advantage and invites Handy Andy back later that day. After a dinner he pretends wasn't carefully planned and prepared, Lon learns just how handy Andy really is. 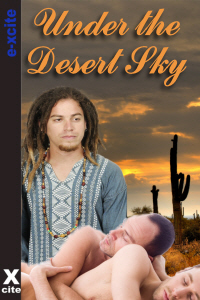 Under the Desert Sky

Tim felt ridiculous as he walked through the tiny convenience store. Not to mention filthy, covered in pale alkaline dust from the White Stone desert. He knew he wasn’t the only one who came here from the nearby Flaming Fool Festival to buy supplies, but still ... Shiny green pants and a blue embroidered vest were not his idea of “creative expression.”
His boyfriend Donovan – the veteran of his circle who came annually to “the Flame” – had convinced Tim it would help get him into the spirit of the week-long, outdoor event. By this, the third day, Tim was ready to try about anything. The first couple of nights of drunken revelry had left him cold, especially when he saw just how frequently Donovan exercised the open relationship clause of their partnership.
So, Tim had gladly volunteered to drive the 30 miles to the nearest store to pick up supplies for their camp. He relished the arctic blast of air conditioning that caressed his sun-baked skin, just as much as he enjoyed the near solitude after days of being surrounded by energetic partiers.
He took his loaded shopping basket up to the register. ‘Hi,’ he said absently to the cashier, eying the list Donovan had scrawled out. ‘Let me get a bottle of Jack, two bottles of the captain, and …’ he squinted, ‘… one bottle of tequila.’
‘What brand?’ The voice was low and husky, a no-nonsense tone. It brought Tim’s eyes up from the crumpled paper and straight into a pair of eyes as blue as the Nevada sky.
Tim felt his heart do a backflip into his belly. The guy in front of him was gorgeous. He looked to be only a few years younger than Tim’s twenty-four, and was mouth-wateringly muscular. His skin was the colour of golden rum, and his black hair was trimmed close to his scalp. It showed off his strong cheekbones and strikingly arched brows, the fullness of his lips almost out of place on his angular face.
‘Um, I don’t know,’ Tim mumbled, shifting his gaze from the cashier to the bottles behind him. He could feel his eyes studying him, taking in Tim’s dishevelled state. He felt like a right idiot standing in front of this stud, wearing his silly costume, with his face unshaven and his blond hair twisted into crazy tangles by the desert wind. ‘The silver label there.’
‘A man of taste,’ the clerk said, and surprised Tim by flashing an approving smile. He purposely raked his eyes over Tim’s lean body before turning to grab the bottles of liquor, a crooked grin tugging the corner of his mouth.
Tim knew that look. Despite the dirt and the outfit, the guy was definitely interested. Tim’s pulse quickened as possibility bloomed in his mind, even if he had no idea how this was going to work in the middle of the desert. It wasn’t as if he could ask him out for a drink; the store was the only building for miles.
‘So, how’s the festival?’ the cashier asked casually, bagging up the liquor and snacks.
‘It’s fun.’ It sounded weak even to Tim’s ears, and he shrugged to cover it up.
‘Fun, huh?’ His sensuous lip curled into a playful smirk. ‘Let me guess. Your friends convinced you to shell out 300 bucks so you could come out to the ass-end of nowhere and “find yourself”, right?’
Tim couldn’t help his rueful smile. ‘Yeah, something like that.’
‘You found yourself yet?’ One dark eyebrow arched mischievously, though not unkindly. ‘Or you need some help?’
Tim took a deep, steadying breath. He lived in the Bay Area, so it wasn’t as if he wasn’t used to being hit on by guys. Just, to be hit on here, by this guy …
‘What if I do?’ he said, trying to stay casual even as his heart was hammering.
‘I think I’ve got something here that might help.’ The cashier leaned forward tantalizingly, and Tim’s insides twisted when he realised just how close the other man’s lips were to his, just a nudge away from a kiss.
‘What’s that?’ Tim asked, almost delirious with anticipation.
‘A shower.’ His eyes glittered, humour and lust mingling gorgeously in the pale blue. ‘You can’t find yourself under all that dust.’
Tim cocked his head in surprise. ‘You have a shower in your store?’
The cashier chuckled. ‘Nope, but we have a hose out back. And soap right here.’
‘You can’t be serious!’ Tim said incredulously.
‘I am! I’ve done it myself.’ He leaned back and stretched, which pulled his white tank top out of the low waistband of his jeans. It gave Tim an appetizing glimpse of the smooth caramel skin of his belly. ‘I tell you, nothing feels better on a day like this.’
The blood was rapidly fleeing Tim’s brain, rushing to fill the erection throbbing to life in his pants. He hadn’t been able to bathe in days, and it would feel so damn good to be clean. Not to mention, this could finally be his chance to take advantage of his open arrangement with Donovan, and have some real fun on this trip.
‘Ring up the soap.’

Carey'd Away (MM)
J.M. Snyder
In Shelf
$2.99
Tweets by
sirenbookstrand