Leah David took a chance when she was renegotiating her Total Power Exchange. Her Master didn’t bat an eye at any of her demands except for one – she wanted him to bite her. Become her Creator. If he doesn’t agree, he’ll have to let her go. She’s hoping otherwise, but nothing is certain.

Her last night in his house leads to a hot romp and a huge revelation. One that will change everything she’s thought about the vampire she loves. 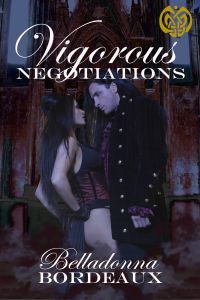 Leah David rested her head against the door. So this is how it ends. The somber thought brought tears to her eyes.

A sad sigh passed her lips as she leaned her forehead against the cool wood panel. Why did I stick to my guns during the renegotiations of my Total Power Exchange? A shiver raced down her spine.

She couldn’t even say the issue was a larger monthly allowance or the size of her wardrobe. No. Isaiah Moore wouldn’t have blinked at that request. His wealth was almost as great as his sexual appetite. What had brought the negotiations to a halt was her determination to have him bite her. Have him become her Creator.

For the first time since she’d entered his house, he’d been stunned speechless. When he finally did speak to her, he’d railed at her for what he called her mortal misconceptions of what it was like to be a vampire.

Truthfully, she had no misconceptions about the vampire lifestyle. She had lived in his house for twelve months—seen all the grotesqueness of what it meant to be a night-walking blood-sucker.

Granted, at first the proverbial ‘blood feast’ had been a stomach-churning experience. The slurping sound and moans of exquisite pain had overwhelmed her, but she realized within the first sixty days of her becoming his submissive that he didn’t drink blood every night. Nope. Isaiah only drank when he couldn’t stand the intense hunger pangs. And, she reminded herself, he never went any further than his already altered sex slaves.

That’s where the deal breaker came in, she supposed. His altered slaves never travelled with him when he was called away from his mansion on a business trip. He’d told her it was for the mortal world’s protection, because most of his ‘creations’ didn’t have the self-control he did. Once he bit her—game over. His sex kitten was stuck at home because he thought she too would turn into a mindless killer.

Nitwit. She’d sooner turn into a werewolf than a blood hungry psychopath.

“You’re thinking awfully hard, slave?” his question sounded from directly behind her.

Startled, she laid her hand over her clanging heart. “Forgive me, Master.” Quickly clearing her mind, she bit her lip as she turned to stare at the handsome, four-hundred-year-old vampire she’d fallen in love with. She blinked back the fresh batch of tears stinging the corners of her eyes. “It’s my last night with you.” Quelling the urge to wrap her arms around his broad shoulders and tell him her deepest desires, she bowed her head.

As was his habit, he brushed his hand over her hair. It was the only outward sign he delivered that showed he gave a good God damn about her.

“Yes, it is,” Isaiah commented. “And, I intend to make it a night you will never forget.”

Asylum Mine
Viola Grace
In Shelf
$1.99
Tweets by
sirenbookstrand