Book Four of the Seven Brides for Seven Bastards Series.

The seven bastard sons of Guillaume d'Anzeray are on a mission to find wives -- women to breed the next generation of a dark dynasty that many wish to see extinct.

It won't be easy to find brides from among the Norman nobility, for the d'Anzeray are upstarts, their family's fortunes raised through bloodshed and violence. As one holy man and chronicler of their times has written, "From the devil they came and to the devil they will return". But these brothers don't care much for holy men or for what is written about them. Now, with the future of their bloodline at stake these mercenary warriors need wives and they have no scruples when it comes to claiming the women they desire.

"I can prove to you that your mind is just as easily roused as your body, Jeanne."

She glowered at him, but the woman was curious. He saw it in the tremble of her plump lower lip, the tightening of her fingers, the catch of breath in her throat. Ram may not have much experience with virgins, but he knew plenty about arousal and temptation.

Slowly he came back to where she sat. "I can give you a climax with only my words," he added, his voice low.

Silent, she stared, opening and closing her fingers on the plunger. He moved around behind her.

The branches of the trees outside rattled against the stone wall and tapped the slate roof. A cloud passed over the sun and took away the golden shaft of light that had previously touched her head, but her hair still held some of that shine. Like a halo, he mused.

But she had not moved away. Her lips uttered no protest.

"There is a curl at the nape of your neck, little Jeanne," he whispered. "The color of wheat just before harvest. It lies there beside a smaller curl that is darker, more tightly curled. Can you feel my tongue, licking slowly along your neck, where those curls sit? Can you feel the tip moving that hair aside to taste your skin? And now my lips against your ear. I might nibble very gently, the tender flesh along the edge where it is pink in that slender beam of sunlight."

Jeanne shifted very slightly forward, and he heard her breath quicken. He smiled.

"My hands slip down your back, sliding your shift away, lightly caressing your spine, all the way to your sweet bottom." He leaned closer so she would feel his words blowing over the curve where her neck met her shoulder, just above the edge of her woolen gown. "Then back up, along your sides...feel my touch, Jeanne? Ah yes, you do. I feel little goose bumps lifting under my fingertips. Hmm, I might need to run my tongue along them. And then I'll turn you over and taste the curve of your titty, press my lips to your pointy nipple and take a gentle suck at the little nub."

"No. Never. I would never let you," she gasped, but it was so soft he barely heard it.

"Let me suckle your delicious bubbies, Jeanne, while I run my fingers over the pouty cherry between your thighs. I'll press, stroke and tickle as I feel you getting sticky, but I might have to lick you down there and see how ready you are. Before I use my cock. You're so small, Jeanne."

Ram paused, but there was no response.

"Turn over on your front. As you were yesterday in the barn. Let me look at you. Yes. Legs apart. I can see the trickle of your essence shining between your nether lips."

He could not even hear her breathing now. Outside the window the clouds moved on, pushed by the gathering strength of the wind, but alternate flutters of sunlight gilded her hair again between each passing shadow.

"I'll try my fingers first inside you and find the key to make you squeal, to make you come undone. I can feel the warm silk of your cunt, tight around my fingers." Sniffing the side of her neck, he smelled rose oil mingling with sage and rosemary. He could taste her on the back of his tongue already. Remembering how she creamed for him yesterday, how her quim trembled and squeezed around his thrusting tongue, his own arousal mounted too fast, drove the actions running through his mind. His balls ached and he felt the stirring of seed, ready to shoot up his shaft at the mere thought of her juicy peach as she bent over on all fours, bottom lifted and knees spread in the straw. "I want to put my cockhead inside you and hold it there at the threshold while I squeeze your full titties. With just one more push I can be buried inside, root to tip, prying open your maidenhead, but I'll savor the moment. You're at my mercy, little one. You're squirming now, your body arching, your breasts captured in my hands, your bottom pushing back. Wait, Jeanne. Wait and I'll give you every inch of my cock until you can take no more. I feel your pulse fluttering against the crest where I'm already leaking seed." He groaned. "Pull me in, Jeanne, guide my shaft deeper and let me claim your virginblood."

She raised a hand to the side of her neck, where his breath must have touched her.

"But she ought to be spanked first."

Both Jeanne and Ram turned in surprise, for there was Salvador, the eldest brother, hands on his hips, grinning at them through the shifting swathes of sun and leafy shadows.

"If she is bent over, she should be spanked hard on that pretty bottom," he added.

Ram suffered a sharp spur of anger. He had wanted to do this alone, but always one of his brothers interfered. They all liked to share, of course, and he was accustomed to it. But this woman had become his special mission. Would he never get a moment alone with her? 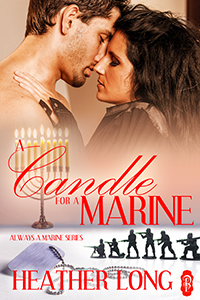 A Candle For a Marine
Heather Long
In Shelf
$2.99