Rachel McKenzie has to give up another Saturday morning to her job. Lucky for her, two handsome plumbers have to work through the weekend too. Egged on by a dare from her colleagues, Rachel dresses sexy and flirts with the men while they work in her office. The plumbers are eager to return her attention, but can Rachel handle taking things to the next level? 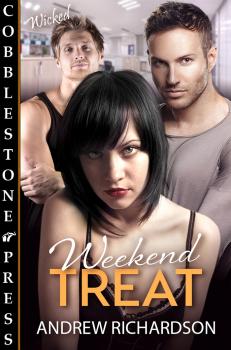 Rachel brushed a layer of dust from the counter in the department’s tea point. “God, this place is a mess.” She poured milk into her tea and then into the mug Kerry-Jane held out.

“Ta.” Kerry-Jane had been Rachel’s student for nearly three years. People around the university sometimes joked that they could be sisters. They both had black hair, but Rachel thought Kerry-Jane looked so much younger.

“It’s dirtier than an archaeological site,” Rachel commented. “At least I had the sense to wear my tatty fieldwork stuff to the office.” She winced in response to the clatter of yet another radiator being ripped from a wall.

“That’s my and Amy’s waterworks being adjusted,” Kerry-Jane confirmed as she flicked her ponytail over a shoulder.

The department had been under construction all week. Rachel wondered when the boys would start in her office. She knew the windows would have to be shut while they were around, and she dreaded the summer heat. That breeze through the windows was the only reason she had survived the season this far.

Kerry-Jane fished the teabag from her mug with a spoon. “Having those two replumbing the place is a fine compensation for having my PhD research interrupted. Christ, they’re Swedish and Italian.”

“Does that make a difference?” Rachel asked, feigning disinterest.

Kerry-Jane gave a long, slow sigh. “It makes them exotic. A cool Scandinavian and a hot Latin make a sexy combination. And they’re both hunks.”

“Are they really hunks?” Rachel dropped her teabag into the bin. “I hadn’t noticed.”

Kerry-Jane laughed. “I bet you did.”

“Well, maybe I had noticed their bulging biceps, thick thighs and tight bums, just this much.” Rachel placed her thumb and forefinger a fraction of an inch apart. “But as they’re nearer your age than mine—”

“And you’ve still got it.” Kerry-Jane’s voice fell to a whisper. “All the blokes in the department have the hots for you.”

Rachel raised an eyebrow. “I thought that was just banter.”

Kerry-Jane shook her head with a mischievous smile. “And the plumbers are miffed at their boss making them do your office on a weekend when you won’t be here to flirt. Apparently you’re the most beautiful doctor they’ve ever seen.”

Rachel raised her other eyebrow.

“You’ve got no idea how gorgeous you are, have you?” Kerry-Jane bit her lip. “That’s what the blokes say.”

Rachel sipped tea to hide her warming cheeks. “Well, you’re gorgeous, and everyone reckons we could be sisters, so I suppose I’ve got cause for hope. And the hunks will have to work around me after all because I’ve got a paper to finish.”

Kerry-Jane laughed. “You’ll be lucky if they let you get anything done!”

Rachel rolled her eyes, trying not to let her pleasure show. “But don’t you and Amy want them? What kind of friend would I be if I got in the way?”

“Of course we do, but we’ve got other halves, so we can only flirt.” Kerry-Jane shook her head in mock sadness but then brightened. “Instead of your fieldwork grunge, why not try something daring tomorrow? Feel sexy. Don’t wear a bra.”

Rachel’s cheeks warmed more. “I couldn’t do that.”

She sipped her tea as the thought sent butterflies into her stomach. “Well, I...”

Kerry-Jane winked. “Amy took hers off at lunchtime.”

Rachel was shocked. “Did she?”

“I’ll think about it.” Well, fantasize about it. Rachel tried to push those naughty thoughts away. She walked with her student along the corridor and leaned casually against Amy and Kerry-Jane’s office doorframe to glance at the plumbers. She dragged her gaze to Amy.

The blonde looked up from her laptop to smile.

She sipped her tea again as her gaze drifted back to the men leaning over the radiator. Their shirts were riding up to reveal muscular backs, and the cut-off jeans did little to hide their tight rumps and their taut leg muscles.

Kerry-Jane leaned toward Rachel to whisper, “Let’s make a bet. If the boys don’t make a pass tomorrow, your two favorite PhD students will take you out for a meal. If they do, you pay.”

“I think I might take you up on that, KayJay,” Rachel said, secretly hoping she would have to pay for the food.

One of the plumbers looked around. His sparkling blue eyes regarded Rachel’s figure before pulling back to her face. “We’ll do your office tomorrow,” he said with a Scandinavian accent.

His smile made Rachel shiver. She took the opportunity to gaze back into his eyes. “I need to work tomorrow. Will my presence inconvenience you?”

His Latin partner stood. “It would be a pleasure to work around you.”

The Latin’s bicep flexed as he picked up the end of a radiator.

Rachel glanced at Amy, whose mouth hung open as she watched.

The Latin’s grin showed off his dimples. “We’ll see you tomorrow, then, Doctor McKenzie.”

“Yeah. See you tomorrow.” Rachel retreated to her office. She couldn’t resist looking at her radiator and imagining the two men distracting her.

She wondered if she’s have the nerve to go without a bra.

Feel sexy. Kerry-Jane’s advice floated through Rachel’s mind as she glanced at the photograph near her computer.

Ebony, her cat, stared back.