Olivia Stanton, the new CEO of the family business, steps out for a wild weekend at the annual Stadium event for the DRMC and falls for both Dalton and Wade. However, she has important responsibilities and leaves them for her job.

Dalton Rourke and Wade Granger haven't been members of the DRMC for long and haven't found a special woman to share until they meet Olivia. After the wicked weekend spent together, they want to keep her forever.

Olivia considers meeting her two men in secret, but her new position is threatened by another family member wanting to take over. Dalton and Wade discover her wealthy socialite lifestyle and wonder if she truly loves them beyond the sexy weekend they shared. Will she be able to keep her job safe and mend her shaky relationship with the two men she loves, or will she lose everything she's ever wanted? 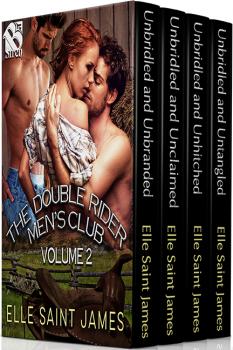 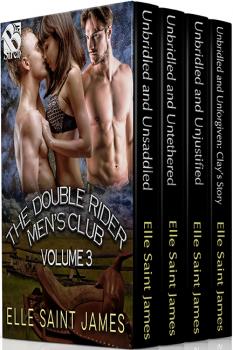 Olivia set her drink glass down and went to the ladies’ room to freshen up and contemplate how she’d feel if no one she met tonight turned her on. A glance in the mirror at all the effort for tonight gave her an answer.

As heir apparent to the family business, her free time was very limited. Next week she was going to take the reins of the company in hand as the designated successor. If anyone in the family got even a wispy hint of where she was right now, not only would they be shocked to the foundation of their beliefs, but she might not be the heir apparent any longer. That would not do. She’d worked too hard.

To say her family was conservative was like saying the North Pole was a bit chilly and Pike’s Peak was a nice hill.

Olivia leaned forward slightly and studied her face in the mirror. She didn’t consider herself a beauty queen, but certainly passably good-looking. She had good bone structure. She took very good care of her creamy skin tone, hiding the few freckles on her nose. Her eyes were an aqua color that many thought were contact lenses. As if. Her blonde hair with the hint of strawberry had been commented on many times as being stunning by people she didn’t even know.

So why was she here? She sighed. Because she was lonely.

Even though the bulk of the men she’d met tonight were very attractive, none of them made her want to jump into a crazy, wild ménage sex weekend. Lonely or not, she wanted desire to drive her actions.

She was the first to admit she was picky where men were concerned. Laurel had commented on that earlier, and she was absolutely right. But what if she didn’t find any men she lusted after tonight? Or worse, what if no one wanted her for a weekend of decadence?

If she wanted rejection and no sex life, she could do that back in Manhattan. Perhaps it was time to call it a night. Or she could circle the room once more.

She sighed again and paused before she touched up her lipstick. She slid the tube of her favorite color back in her purse.

No. She was done. She’d met everyone. None of the men made her heart dance. Worse, she didn’t want to be rejected during round two. She’d go back to the hotel and turn in early.

Decision made, Olivia decided to slip out and not bother Laurel. She’d text a message later on and give her excuses then. Her cousin looked like she was already having a great time. That was not a surprise. Olivia didn’t need to be a stick-in-the-mud, fuddy-duddy tight ass and ruin her cousin’s weekend, too.

She came out of the hallway to the bathroom slowly. She spied her cousin across the room heavily engaged in conversation with the same men as before.

Olivia skirted the edge of the room full of exuberant people toward the exit, which had also been the only entrance, keeping Laurel in her periphery. Her cousin was loyal. If Laurel saw Olivia leave, she’d go, too. Olivia traveled down the hallway on a mission to get out before anyone—especially Laurel—saw her go.

She made it to the hallway leading out of the bar. She passed the security guy who’d let her in earlier. He took note of her departure, but didn’t stop her. The guy was huge and muscular, and perfect in his role as head of security. No one in their right mind would ever tangle with him. Those not in their right mind wouldn’t tangle with him for very long before he crushed them.

She yanked the exterior wooden door wide open and stepped out into the crisp night air. Another forward step and she ran headlong into what seemed like a man-sized barrel of muscle. She inhaled to apologize and his amazing scent registered. She grabbed fistfuls of his jacket in her hands to steady herself, and took another deep lungful of luscious, man-scented air. It really had been a long time since she’d enjoyed the company of a male. This man’s scent alone made her tingle in places that had forgotten what it was like to feel good.

“Sorry, ma’am,” came a deep voice from over her head. He’d grabbed her around the waist with one arm to keep her from bouncing off his chest and onto the ground. “Are you okay?”

“Yes. Thanks. I was in such a hurry I didn’t see you. I’m sorry.” Olivia glanced up to see his face. She was greeted with masculine, angular lines and sculpted lips she wanted to trace the tip of her tongue over repeatedly. His short, dark blonde hair looked soft and silky enough to rub her face in. She finally locked onto his amazing blue eyes and became mesmerized.

Now why couldn’t the most attractive man she’d ever laid eyes on be a part of the group she’d just left?

Damn, he was fine. Her pussy gushed in agreement. Limbs still trembling, Olivia cleared her throat wondering what she could say to keep him close just a little bit longer. He hadn’t broken the eye contact. She knew she’d stared too long, but was powerless to look away. The seductive intensity of his gaze liquefied any thoughts of leaving. It melted most of her brain’s power to process.

“Would you like to go inside and get a drink?” he asked, saving her the trouble of thinking up something clever to say. Her words had evaporated as she took in his features.

She finally blinked. “Yes. Thank you. That would be great.”

“The club I belong to is having a special event here tonight. Would you be interested in joining me?” He paused and added, “And a friend of mine?”

Dalton kicked his clothes behind him and turned toward the daybed. His cock was at the perfect level next to her mouth. She reached out, grabbed him close, put her mouth around the head of his cock, and sucked hard.

He practically growled and grabbed her head. “You are so fucking good at that,” he murmured.

She released him. “I’m so glad you think so.” Dalton seated himself next to her on the daybed. Wade did the same thing.

Slow, steady breathing interspersed with a few groans and moans came over the speakers.

On stage, the performers had moved to the bench seat at the foot of the bed. All the men were naked. The woman was already sandwiched between two of them and it looked like she was already doubly penetrated. The third man stepped close so she could put his cock into her mouth.

Dalton reached between her legs and started rubbing her clit. “My, my, you’re so very wet below, love. You make my cock throb anxiously, waiting to pierce your pussy.”

“Seeing people having sex everywhere I look has that effect on me. And for the record, my pussy can’t wait for your cock to enter.”

“Good. Climb up on the bed and let Wade get your ass ready.”

Olivia’s heart pounded hard and fast all of a sudden. She carefully climbed on the daybed, but left her heels on. She turned so that her back was to Wade. He pushed the center of her back with his open hand until her face rested against the bed. He rubbed something slippery across her ass. One of his fingers slid inside her anus and she startled.

“Relax,” he said, and kissed her hip. More lubricant was slathered between her ass cheeks and another finger joined the first in her ass.

Dalton seated himself on the daybed and reached out to touch her pussy lips. As Wade readied her ass, Dalton continued to rub her clit. She felt him kiss the center of her back. Olivia’s gaze went to the three dark-haired lovers across from them. They still moved together, one man fucking her ass and the other fucking her pussy. It was so sexy to watch. She felt her pussy clench in utter desire.

“Don’t,” Dalton said, but didn’t stop stroking her clit. “Wait until we are both fucking you. You’ll be glad you waited.”

Wade pulled his fingers from her and quickly centered his cock between her cheeks. The head of his cock pushed into her derrière hole slowly. “Relax,” he said.

Olivia pushed out a breath as he pressed the head of his cock past the ring of muscles guarding her ass channel. Once he was that far inside, Olivia had to clamp down and force herself not to release the climax that hovered so near she could almost feel it.

Dalton removed his hand from her clit. Wade pushed his cock deeper into the tight, virgin space.

“Fuck, you’re so tight,” Wade whispered. He moved slowly, but didn’t stop pushing until he was fully seated.

Dalton straightened her up and positioned his body tight against the front of her. She was finally sandwiched. “Get ready for me, love. I can’t wait any longer.” He put a condom on, centered his cock at the edge of her pussy lips. Wade pulled her backward a bit against his wide chest for easier access, she supposed. Dalton then thrust his cock deeply inside the walls of her pussy.

It was all she could to do not to scream in climax the moment they were both penetrating her. She clenched hard to keep from falling over the edge.

The three of them were already breathing hard, and Olivia hadn’t realized how decadently sexy she’d feel with two cocks buried deeply in her pussy and ass.

She glanced out the window and noticed that the trio across from them was still in the same position, but had stopped moving.

Wade gripped her hips. He slid his cock out halfway and back in slowly. Dalton then did the same thing. Having the two of them pumping in and out of her was exquisitely alluring.

“Finger yourself,” Dalton said. “We’ll even let you come this time.” The smirk on his handsome face sent her pulse even higher.

Olivia reached between them and slid a finger over her clit. Her swollen bud pulsed as she rubbed a finger back and forth.

The wickedly full sensation of two men penetrating her as she pleasured herself was the pinnacle of ecstasy.

Dalton reached up tugged at one nipple. He and Wade then sped up their tandem thrusts.