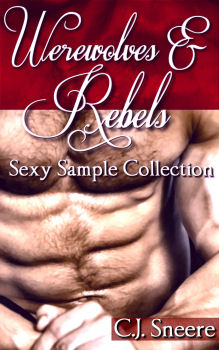 "These new ideas look great, Tom." Ethan looked up, flashed a dazzling smile. "Could you outline these in a brief memo? I'd like to email them to the other ad designers."

I felt my face heat, and I smiled shyly in return. "Certainly. Glad you're impressed with them. I think taking the campaign fully digital will really cut costs."

He nodded, patted my back, and I noted how his hand lingered as it smoothed down my blazer. "Keep this up, I see a promotion to full partner in your near future. You've been a wonderful asset to this company since you joined us."

As Ethan left my office, I watched his firm, muscular behind until the closing door blocked my view. He and Terry owned this small but successful ad firm, and I'd landed the job as one of their top ad execs with my impressive resume and experience. Over the six months I'd been here, I'd worked close with them on many projects, and we were becoming good friends.

They were not only partners in business, they were partners in life, and they had an excellent working relationship I admired. Both men knew well how to separate business from personal.

My work environment was a welcome change from the one that awaited me at home. While my bosses and co-workers tended to have a liberal mindset, my home life was ultra-conservative. My wife and I both came from old money that was still clinging to outworn ideologies. In truth, I felt trapped in my personal life, but freed when I arrived at work each day.

I'd lived a lie for all my life, but working here was giving me the courage to finally reveal the truth about myself. In my family, a strict Christian household, there was no room for a gay man. I'd married my high school sweetheart, pretending to love her for ten years. Well, in our own way we had once loved each other. I'd been on the verge of coming out so many times, but then my mother and father's disapproving glares would haunt my thoughts and steal my courage.

Watching Ethan and Terry, though, had made me realize how much I wanted that kind of relationship. To stop living the lie. I no longer cared about my parents or wife's money. I had more than enough cash to see me through, and a job that paid well. The only thing holding me back from coming out now was the worry about how it would influence my kids. And if Katy wanted to be a bitch, she could try and make custody a difficult game for me. So, for the time being, I sat on coming out, and felt all the more a coward for it.

I took in his handsome face, much as I had just done with Ethan. Damn, but they were a striking pair of males...