Andrew Ainsley is a Deadzone-sponsored runner participating in the most intense cross-country race of his life. However, a double marathon through the wilds outside the safety zones will bring trouble he didn’t anticipate.

Marcel Carter has been in love with Andrew since he started running for Deadzone five years previously but never had the courage to ask him out. It isn’t until Andrew is lost that he realizes he’s been wasting time.

Matthew Gibson volunteers frequently for dangerous field missions, leaving little time for real relationships. He thinks he’s ready to put that life behind him until his cousin, Brooklyn, asks him to help rescue Andrew. When the three meet, sparks fly, and Matthew thinks he’s finally found what he’s been missing.

As they fight to survive zombies unlike any they’ve faced before and uncover dangerous government conspiracies, they’ll have to determine if their newfound love is real or if it only exists in the dead zone.

Jana Downs is a Siren-exclusive author.

Heat Rating: Scorching
Word Count: 55,353
14 Ratings (4.7)
Menage a Trois/Quatre Science Fiction Alternative (M/M, Gay)
In Bookshelf
In Cart
In Wish List
Available formats
Mobi
ePub
PDF
HTML
Cover Art by Sloan Winters
Reviews
This series is by far one of my absolute favourites! The world Ms Downs is creating is multi-layered and rich with details. She's managed to give some more hints in the story arc regarding the zombies in her world and yet it never deters from the romance between the three men in this story.
These men are as unique as the world they live in and have to do battle both externally and internally before they reach their happily ever after. I loved Working Stiffs (Deadzone 1) and this book is just as good if not a touch better.
Corinne Davies
Read more...

Matthew smiled in the light of the moon and Marcel’s heart tripped over itself. “So how about you, Marcel? What is your story?”

Marcel shifted. “I don’t really have one. I had civilian parents. They run a small tax business in sector four. I’m no good with numbers, so when I went to training school I majored in field training. After graduation, I got a job at Deadzone and have been there ever since. Andrew was my first assignment.”

“You must care about him a lot to stay on with him.” It was a statement. Was Marcel really that obvious?

He shrugged. “Of course I do. We’ve been friends for years now.”

“So tell me about him,” Matthew encouraged. “I’ve heard what the media says about him. I know he’s one of the best runners in the country, and I know he donates copious amounts of money to the National Orphanage. But other than that, there isn’t too much info on him.”

Marcel smiled at the thought of Andrew. He sighed softly and leaned back against his bag, stretching out so he could have a full view of the stars above him. “He’s wonderful. A little timid but there is a thread of steel running through him. He’s one of those people who can put away fear if he has to and has several times. There is nothing he loves more than running. I can’t imagine him doing anything else. The reason he donates to the National Orphanage fund is because he was an orphan himself. He doesn’t talk about it much, but I think that’s where his anxiety comes from. He can’t stand crowds. He’s probably much more at home in these woods than he would be on a packed busing transport.”

“How long have you been in love with him?” Matthew asked.

The macaroni he’d spooned into his mouth got sucked down the wrong pipe, and he proceeded to choke. He coughed until he was pretty sure his face was bright red, and Matthew separated the distance between them and pounded on his back in an effort to help him out.

When he finally regained the ability to breathe, he gasped, “I’m not!”

Matthew chuckled. “You’re not? Could’ve fooled me. You talk about him like he walks on water. Does he know?” He continued to pat him on the back as he spoke, making soothing circles that sent chills down Marcel’s spine.

“Um, no,” Marcel said, pulling away from Matthew’s soothing hands.

“The timing has never been right,” he said. He was embarrassed to be admitting the fact out loud. Why am I telling him this?

Matthew’s breath played across the side of his face when he spoke. “Timing is everything.” For someone as bold as Matthew seemed to be to, the lack of judgment in his voice was surprising. There was more to the SCAB agent than met the eye. “You’re a good-looking guy, Marcel. There is no reason why you should be scared to ask the guy out. I know if I had you drooling over me, I’d be beyond flattered.” Shock churned in Marcel’s gut. Is he serious? Matthew cleared his throat. “I like your passion and your commitment. When we catch up to your run kid, I’ll see if I can’t push you two together. I’m good at getting my way.”

I just bet you are. Aloud he said, “That won’t be necessary. I’m planning on making my intentions known.”

Matthew smiled slowly. “Good for you.” He moved over to where he’d left his pack, and Marcel breathed a sigh of relief. It was very hard to think when Matthew was near him. Which was weird considering he’d never felt that way about anyone other than Andrew. A little niggle of guilt ate at him. He shouldn’t be attracted to Matthew.

He rolled over and dug in his bag, looking for his sleeping throw. “I’m going to go on to grab some sleep. Take first shift?”

Matthew nodded. “Yeah. I’m too wound, so I’ll be up for a while. Get some shut-eye. I’ll wake you up in four hours.”

Marcel crawled into the tent and wrapped his throw around him. The automated heating system in the blanket regulated for the warm night, making the material feel almost sheer. He toed off his boots but left his socks on. He didn’t dare get more undressed than this, just in case of a night raid.

“You know, if it doesn’t work out with Andrew. I’d really like to take you out,” Matthew said from outside the tent.

“What?” Marcel asked, needing clarification. Maybe he needed his hearing checked. He couldn’t have asked what he thought he asked.

Matthew chuckled. “You’re a good-looking guy, Marcel, loyal, assertive. I think I’d like to take you out. Just think about it.”

Marcel’s heart pounded. Jeez. He hadn’t been expecting that. He hadn’t been asked out on a date in… He strained his mind to remember the last time. It had been years. He was pretty sure of it. It wasn’t that he hadn’t had encounters, but he was a bit of a homebody himself and didn’t frequent anywhere but his usual pub and his work place. Since he got hazard pay for assisting the run kid, he had a tidy little nest egg saved up so he didn’t work in between assignments.

Matthew chuckled. “You’re attractive, and I like you. Why wouldn’t I ask you out?”

Marcel had no answer for that. He just knew that he was somehow deeply thrown off by the blunt way Matthew assessed the world. It was refreshing and pulling. It was also completely off-limits considering his intention to ask out Andrew. He cursed himself a thousand times for being a fool. Even considering a date with Matthew was inappropriate. Why can’t I have something like the company presidents have? The illicit thought was banished as soon as it crossed his mind. Andrew would never go for something like that. He didn’t seem like the type.

Marcel didn’t hesitate this time. He leaned forward without preamble and sucked the head of Andrew’s cock into his mouth. Matthew’s dick jerked in want. He pitched forward and worked on the underside of the base of Andrew’s cock, working his way downward to the tight globes of his sac. Marcel bobbed his head, and Andrew groaned above him.

The run kid reached down and petted both of their heads, gasping his thanks as they pleasured him. Matthew enjoyed the salty taste of his soon-to-be lover’s skin. He took one ball in his mouth and then the other, suckling them gently in turn. Marcel grabbed the back of his neck and pulled him back before pushing his head down on the head of Andrew’s dick and taking up Matthew’s position. Matthew chuckled before concentrating on sucking him with all the fervor he could muster. Pre-cum decorated the flared tip, and he lapped it away.

“Mmm you taste good,” Matthew complimented, dipping his head back down for another taste. He went down as far as he could on Andrew’s prick until he had to loosen his throat or choke on Andrew’s length. Marcel’s hand went down to knead Matthew’s crotch through his pants, and he groaned around Andrew. It had been so long since he had been touched. Since before his last mission at least.

“God you two are so hot,” Marcel said, panting as he continued to service Andrew with Matthew. Matthew returned the favor of his touch, rubbing the hard cock that was straining Marcel’s zipper with enthusiasm. He would’ve given his survival pack to be able to have some slick and liquid protection right about then. He wanted to be naked and fucked in the best ways.

They continued the sexual teasing for several minutes as Andrew bucked and writhed for them. Matthew put his hands on his thighs to steady himself as he lost himself in the act, and they trembled beneath his touch. Marcel and he shared a kiss between licks, and Andrew groaned.

He winked at Marcel. “Wanna put him outta his misery?”

“Oh yeah. Can’t want to taste him when he loses it,” Marcel said, his eyes sparkling with equal parts lust and amusement.

They went back to their work, suckling and licking while they concentrated on driving Andrew over the edge of the abyss. Andrew made the sexiest mewling noises in the back of his throat, begging them both without words for them to help him get to orgasm. They took turns deep throating his cock until Andrew was bucking against them and crying out with each downward plunge.

It took only a few more seconds for Andrew to gasp that he was coming. Matthew pulled back and let Marcel wrap his lips around his head so he wouldn’t miss a drop of Andrew’s essence as he shuddered through his orgasm. Matthew kneaded Andrew’s balls, ratcheting up his pleasure with careful tugs.

Finally he stopped shuddering, and Marcel backed off. Andrew’s knees hit the dirt between them a second later. He reached out and kneaded both their hard dicks through their pants. “Take it off,” Andrew murmured. “I want to touch you.”

Matthew wasted no time in pulling his body out into the warm night air, and neither did Marcel. Andrew’s warm hands wrapped around both of them, jerking them off in unison. Matthew let his head fall back, and he lost himself in the pleasure he was experiencing. His love life had been nonexistent for a while now, and it somehow it made the entire process that much more intense. He felt like a teenager with his first lover all over again. 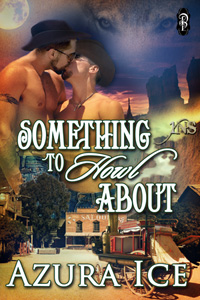 Something to Howl About
Azura Ice
In Shelf
$1.99 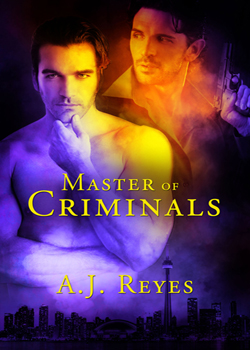