When A Man Loves A Man

Stand By Your Man by Michael Bracken

A private eye learns what it’s like to want someone so bad he doesn’t care about the consequences when he falls for his latest client, a wheat-blond graduate student recently dumped by the English professor with whom he was cohabitating.

Sometimes only dirty, filthy sex will do. After a long and dirty day, that’s what Jake wants from Kevin. And, he’s not going to stop until he gets it. Kevin is happy to comply, even if it means spending extra time finishing the laundry.

Ben’s band is the hot new thing on the line up for this summer’s national tour of festival shows. And with festival tours come tour flings: sweet little love affairs in bus bunk-beds and stolen backstage kisses. In Louis, Ben thinks he might have found his perfect tour fling – will a stolen afternoon at the beach prove him right?

Halfway up the Stairs by Josephine Myles

When Charlie wakes up alone and remembers arguing with his boyfriend the night before, it seems like nothing will resolve the situation. Josh wants them to move, but Charlie is too attached to the house. It’s not just all the work he’s put into it, though, it’s all the memories. One memory in particular, of standing hidden halfway up the stairs, watching and wanting... A Brush with the Law by J Manx

When a friend asks Michael to assist with a presentation at a police training session he instinctively declines. After all, he’s never had any dealings with the police and his presentation skills leave a lot to be desired. However, his friend’s persistence pays off, which is fortunate for Michael as there is a rather attractive police sergeant in the audience.

World War I. The Western Front. Two soldiers go over the top. One keeps running, through enemy lines and beyond, shedding his weapons of war. While the other follows close behind, watching and lusting. They capture more enemy ground than the entire 1st Army’s taken in four years of fighting. And then they capture each other, celebrating their temporary personal victory in the comradeliest manner possible.

When Aidan asks Nate to stay late at work he wonders why he’s been asked, but as Aidan is tall, dark and Italian looking he doesn’t exactly mind. When Aidan offers him a beer and seems to be flirting Nate’s confused; Aidan’s always seemed such a ladies’ man. But could he be wrong? There’s only one way to find out …

A Date with the Popo Bawa by G R Richards

In rural villages across Zanzibar, the Popo Bawa is the most feared of all creatures. He is known to paralyse dreamers and sodomize them as they sleep. When Gus sets out to investigate the case, he’s certain it’s nothing more than sleep paralysis coupled with some sort of shared cultural nightmare. But, as he and his Swahili translator, Ayize, talk to more and more victims, the Popo Bawa becomes so real Gus he decides he must capture it to save the villagers from further brutality. He doesn’t mind taking one for the team. But how will Gus react when it turns out the Popo Bawa has been right in front of him throughout the entire investigation?

Ray knows that finding a good secretary isn’t easy so when Brad comes along he wants to do everything in his power to keep him. He has a feeling Brad’s gay, not that it makes any difference to him getting the job, his qualifications are impeccable.

One day he notices Brad has a sore neck so he offers to massage it, but the massage turns into much more than either of them bargains for.

Driven To It by Elizabeth Coldwell

Even the best brief in the business can’t help star striker, Jordan Kennedy, escape a driving ban. Needing a ride to the training ground, he hires cute chauffeur, Callum, to ferry him around. Their relationship gets off to a frosty start, and it doesn’t help that Jordan’s fighting a fierce attraction to Callum, taboo in the closeted world of football. But an unexpected detour on a stormy day brings their mutual lust out into the open.

All The Boys by Sommer Marsden

You’re beautiful. I’d like to take your picture...should be the beginning of a bad joke. But it’s not. And when Gil decides to let go and trust Simon to take his picture it’s tougher than he thought. Faced with the camera’s unblinking eye, there’s a whole lot of anger and surprisingly some healing. Simon seems to think he truly is beautiful – scars and all. Garden Variety Michael Bracken

Doug Fowler tends lawns for rich people and hasn’t come out of the tool shed. He thinks the stories his fellow gardeners tell about being seduced by clients are so much compost until the boy toy of one of his rich clients comes on to him. Doug can’t resist the offer and soon finds himself in a torrid relationship that forces him to choose between love and money.

Getting Off Easy by Landon Dixon

Trevor has had a thing for older men, ever since he and his gym teacher turned a one-on-one wrestling session into a hotter, sweatier session in the high school shower room. So, when ‘Big’ Bill Denton pulls him over driving the beater he’s just bought for his 18th birthday, and he sees the 50-year-old cop bulging out that crisp blue uniform right in front of him, he just can’t control himself. This traffic stop is going to be a whole more than routine, for both men.

What happens if you run into your secret “gym crush” on the day of a big review at work? Do you stammer like a nervous 16-year-old on his first date? Or maybe you draw words of wisdom f 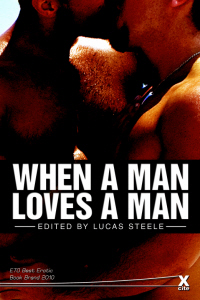 When A Man Loves A Man

I felt weight on the far side of my mattress, I opened my eyes to find Jeremy beside me. He had showered and he smelled of Irish Spring and baby powder. He was completely sober.
‘Hold me,’ he whispered. ‘I don’t want to be alone.’
I felt the familiar tightening at my crotch as he snuggled into my arms and curled against me. He toyed with the hair on my chest, one finger drawing invisible designs as his hand moved lower, over my taut abdomen and under the waistband of my boxers.
I turned then, and took Jeremy’s head in my hands, his still-damp blond hair threading through my fingers, and I covered his mouth with mine. His lips were full, soft, and moist, and he kept his eyes open as I thrust my tongue between them. Our kiss was long, and deep, and hard, and it took my breath away.
When it finally ended, I whispered in the dark, ‘I’ve wanted to do that since the day you walked into my office.’
Jeremy placed a finger on my lips, silencing me. He pushed the sheet aside and slid down the bed. I lifted my hips when he tugged at my boxers. A moment later they lay on the floor and my client’s warm breath tickled the dark thatch of hair at the juncture of my thighs.

Summer Heat: Back to the Farm (MM)
Alex Carreras
In Shelf
$4.50
Tweets by
sirenbookstrand