When I Met Jack

When Leah meets a man who shares her dreams and desires, she falls for him quickly, convinced he is the one for her. But she doesn’t know about his dark secrets from a past that nearly destroyed him. She tries to understand him, but he pushes her away and into the arms of another man. When the new man learns the identity of Leah’s former lover, he realizes he knows him from a past he would rather forget, and does his best to protect Leah from learning the truth about him. 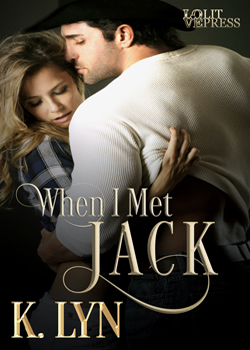 When I Met Jack

Jack didn’t say a word as he watched Leah, waiting to see how far she would go. Was she all talk or was this the real deal? Leah unbuttoned her blouse and slid the garment off of her body. She pulled roughly on Jack’s shirt, drawing it out of his jeans and forcing the man’s hands above his head. The shirt fell onto the floor behind him, and Leah teased the hair on his chest. Jack took her head in his hands and kissed her full pouty lips. Leah fell against him and swore that she would have him all night long if that’s what it took to erase the memory of Camden from her mind.

When it was over, Jack asked, “Was it worth it?”

Leah turned away from him and pulled the sheet over her nakedness. “What do you know?” she sniffed.

Jack moved her hair to the back of her neck and kissed her shoulder. “Who was the lucky man you wanted to be with tonight? Because I know it wasn’t me.”

The words were hurtful to Leah, but true. She had used him. “I like you.”

Jack leaned up on his elbow and dared to touch Leah’s face. “That’s sweet, honey, but who did you really want to be drilling you tonight?”

Jack pushed her down into the pillows and forced her quivering lips to accept his. He didn’t stop, couldn’t stop, until he knew she wanted him. He felt Leah’s heart beat faster against his chest and he stopped kissing her. “What is it, Leah?”

“You tensed. What gives?”

Leah put her head down on Jack’s chest and mumbled into his thick hair. “I was a virgin.”

Jack thought he surely misunderstood the barely audible words, but he heard the word virgin as if she had shouted it. “You were a virgin… tonight?!”

Leah slowly raised her head and peered at him through her hair.

“Almost a virgin? What does that mean?”

Taken by the Biker Dom (MF)
Doris O'Connor
In Shelf
$2.99
Tweets by
sirenbookstrand