Think how much fun it would be if you were a puff of smoke. If you were a naughty ten year old, you would look at your sister’s diary. If you were a teenage boy, you could drift into the girls’ locker room. If you were a man, wait, if you were a man who had been born centuries ago, and you and your brothers had done a thoughtless deed to a sweet young girl and had a curse put on you, well, drifting around as smoke could become something else.

It did not help if the witch who put the curse on you let you form a small part of your body now and then. You could talk, but that often scared people away, a voice from nowhere. You could produce a hand, maybe one foot, and, yep, that impressed people.

Then, after all the centuries of drifting with forest fires, and campfires, and wherever the wind sent you, there was a woman who closed her eyes and only smelled cinnamon and sandalwood. But you needed to do more than just pleasure her with a hand.

She leaned back against the pillows and allowed herself to enjoy the quiet of the night as the fire died down, and she was fascinated to see the smoke dance in a thin veil around the pit. She closed her eyes and drifted off, almost asleep, when she felt the touch of a hand on her foot. She did not move, because it was a soft, messaging touch, the thumb under her arch rotating slowly to relax that ache. She thought, gee, what a real dream, as the hand moved up to her ankle and lifted her leg up and off to uncross her legs. In her dream, she allowed the hand to keep hold of her ankle, as it felt warm and comforting, and then it moved up to her calf.

She rolled her head slowly to one side, and the hand messaged the muscles in the back of the leg, and it felt so good she moaned low. She scooted down to get more comfortable. The hand moved up to her thigh, but it was only softly drifting up and down the inside, raising small goose bumps of enjoyment. Unconsciously, she let her leg fall away, opening herself up.

The hand softly moved back and forth, but each stroke up brought the strong fingers closer to her cunt. She realized that, besides the wood smoke, she could also smell her own sex. For the first time in months, she was actually aroused. This was a great dream even if she was only barely asleep. Finally, the fingers’ soft movements made the contact she wanted. Soft caresses against the slit, then a finger was slowly moving back and forth between the lips, moving easily due to the moisture that seeped from her core.

She thought she heard a soft chuckle, but the finger felt so good she just relaxed and let it do its job, dragging her moisture all the way back to her tight ass hole and then up around the nub that was pounding, fat with blood. She felt the hand insert itself between the wet lips, and the finger slowly went into her core. She sucked in air, and her hips moved up. Then, as the finger moved up and down, the thumb went back to the demanding nub, the heat rolled upward through her stomach, and her breasts tightened until the ends were hard as pebbles.

Finally, as she was finger fucked, she felt the build of climax as muscles all through her body began to clinch. The hand pulled out and a finger and thumb pulled and pinched her nub. She yelled as she bucked and lost it as blackness rolled over her. She lay back, grasping the wooden chair handles, pulling air into her desperate lungs. It was at this moment she realized she was not asleep, this was really happening. She raised up, expecting to be facing a man either on his knees or leaning over her.

But no one was there. There was only a wisp of smoke floating over her leg and then dissolving in the breeze, leaving behind the smell of sandalwood and cinnamon. 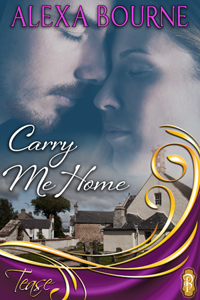