Callie loves Barry…till he cheats on her. Then she gets involved in an email relationship with a mystery man: Green Knight. Callie and “Green” are both involved in a local dog-lovers’ group, fighting City Hall. One day her mystery man invites her to a costume party…and the fun starts. 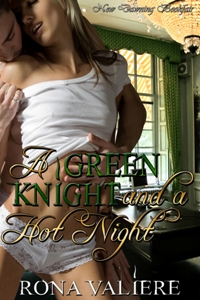 Callie wondered if GreenKnight might be her “white knight,” the man who would sweep into her life, rescue her from her aloneness—and her residual anger and hurt over Barry—and bring new joy and a new dimension into her world. But of course, she had never seen his face. She didn’t know if he was young, old, or possibly even had an offputting face in some way. Well, she could even handle it if he was disfigured, but if it turned out she was building fantasies over a teenager or a geezer.

And she was building fantasies. There was no denying it. She was caught up by, enraptured with this crusading do-gooder with the can-do attitude and the get-it-done results. But she had to know if she was chasing up a blind alley.

They had begun a correspondence by now. Callie took it as a good sign that “Green” (as she now called him) was interested enough in her to write back and forth to her, and she used this opportunity to try to find out more about him. “It’s unusual to find someone with the energy of a teenager yet enough free time to do as much as you do, such as usually only a retiree would have at his disposal. Am I stereotyping here or what?” she wrote cautiously.

Callie held her breath when she got his reply, but she exhaled deeply and gratefully when she read: “I am neither a teen nor a geezer. LOL. Try splitting the difference. I am in my early thirties.” She was twenty-nine herself. Whew! He was just the right age for her.

Callie’s next discreet inquiry was regarding Green’s occupation…if he had one. Since he had so much free time, she reasoned, he might be unemployed. Once again, the answer was reassuring: “I’m on the tech crew of the Sunnyside Theatre. I have so much free time by day because the bulk of my work is done in the evenings. Yes, we have rehearsals and other work during some daytime hours, but most of my working hours are put in after dark.”

The correspondence flew thick and fast now, although they still mostly talked about Pro Dog matters. Callie did tell Green that she managed a floral warehouse, and Green did admit to an overwhelming fondness for chicken-fried steak, but mostly they didn’t talk about themselves except in relationship to the organization. The more passionate Green became about their cause, the more Callie respected him. The more creative Green became in dreaming up ways to advance their agenda, the more Callie admired him. She was halfway enamored of him already…and she still didn’t know his name or what he looked like.

Maybe it’s best if I never meet him, she thought to herself more than once. This way I can’t get hurt or disappointed. She certainly didn’t want a repeat of what had happened with Barry. Then again, she did want a boyfriend. She did want to fall in love again…if only she could have some kind of guarantee that this time she wouldn’t get hurt. She knew she couldn’t go through life forever shying away from relationships for fear of getting her heart broken, yet she couldn’t help being gun-shy after this last bad experience.