A Time to Heal

Rachael Walters is a social worker. She identifies with remorse and sorrow almost every day. But it wasn’t always the case. Once, she was a carefree young woman with goals and ambitions, but then a tragic accident left her scared physically and emotionally. Now, just getting through the day, proves to be a challenge. But then a kindly high school teacher, Coach Tom Montgomery, walks into her life and she can’t deny the attraction she feels. But what man would want a disfigured woman? Or one that carries emotional baggage? Can Rachael come to grips with her past and return the love Tom is offering? 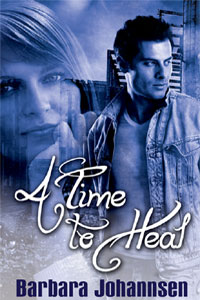 A Time to Heal

The hinge squeaked as the door of the food pantry was opened. Rachael turned from the desk, putting aside the thought of returning Coach Montgomery’s call. The afternoon promised to be busy. Several of the regular families the donated food was given to each month would be stopping by. Leaving the office, she pulled the door closed and tried to put her mind on helping whoever had stopped by. She brought a smile to her lips and strode into the main room of the building.

The man she had seen in the park stood near the front door, his gaze surveying the interior of the pantry. Rachael halted and stood watching him as he appeared to be taking in the entire inventory of the room. He had his hands poked into the pockets of his long coat and a serious expression wreathed his face. She drew in a quick breath as he turned his head and she was able to see his features clearly. Angled planes and deep-set brown eyes complimented tanned skin and a chiseled jaw. His dark hair was neatly trimmed and just grazed the top of his crisp white dress shirt. Rachael saw his expensive looking suit beneath the heavy overcoat and her gaze followed his lean length all the way down to the polished leather shoes on his feet.

Her heart fluttered oddly in her chest. She raised one hand and clutched the neck of her blouse, trying to identify what she was feeling. It was so uncommon. True, she had met men in the past that aroused her interest, but she had never actually stared at one so handsome and felt her heart beating a rapid tattoo against her ribs.

“We meet again,” he said, turning a smiling face toward Rachael.

Rachael had to force her feet to move across the floor. She moved her hand from her throat and stepped behind the counter at the end of the room. As she met his gaze, she felt a surge of strange warmth flush her cheeks. Defensively, she raised her hand and smoothed the fall of hair across the scar on her face. Tipping her head to one side so that the scar remained hidden, she smiled slightly.

“Yes, so we do,” she said, her voice a bit raspy. She knew by his appearance that he wasn’t there to solicit food for himself, or perhaps anyone in his social network. He was far too well dressed and good looking to be in need of much of anything. The thought almost made her chuckle. Why should she think that good-looking men weren’t in need of much? Dashing the thought before something irrational came from her mouth she drew in a deep breath. “And what can I do for you?”

“Are you Rachael Walters?”

“Yes.” Puzzlement pulled her brows together.

The man walked past the rows of canned goods, poked out his hand and came straight toward her. “I’m Tom Montgomery.”

Coach Montgomery? The name streaked across her mind seconds before he stepped up to the counter and offered to shake hands with her. Rachael lowered her gaze to the open hand, noting the smooth palm and the long tapered fingers.