Sabin loathes the desert, which makes living in Hell the opposite of fun. Luckily for him, he can avoid the sand and the heat as long as he stays in the palace, and with as much work as he does for Berith, he doesn’t plan to leave anytime soon.

Until Berith orders him to.

Zeno is a loner, and for good reason. He’s known as The Mercenary, and he’s Hell’s bogeyman. People are afraid of him, and he’s fine with that because it means they leave him alone.

But when Zeno stumbles onto a convoy attacked by a group of demons, he stupidly decides to step in. He ends up saddled with a pretty palace boy, Sabin, and agrees to take him back to the palace—for a price, of course.

Neither of them expects to fall for the other, but they soon realize it’s not impossible. What is impossible is for them to find a way to make things work between them. Sabin belongs in the palace, while Zeno belongs to the desert.

How can they be together? 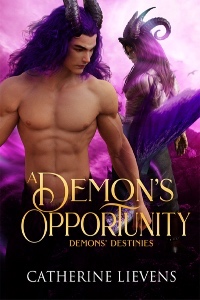 Sabin was doing his best to ignore the scene in front of him, but it wasn’t easy when Berith and Mel were all over each other. They weren’t doing anything inappropriate, but Sabin couldn’t avoid listening to them. Mel was in Berith’s lap, and they were cuddling, for fuck’s sake. Why were they cuddling in Sabin’s office?

Mel sighed heavily. “I should go. Class will start soon.”

“I don’t think the kids will care if you’re a little late,” Berith said.

Sabin heard them shuffling around, and he risked looking up. He was relieved to see Mel had gotten up and was straightening his clothes. He caught Sabin’s gaze and smiled, and Sabin couldn’t help smiling back.

He may never fully understand why Berith had fallen for the human, but Mel was a good person, much better than Sabin had expected. He deserved to be happy, and apparently, Berith made him happy.

“Sorry about that,” Mel said. His cheeks were flushed, which was kind of endearing.

“Not a problem. It wasn’t your fault, anyway.” When Mel had come in to tell Berith he was going to work, Berith had pulled him into his lap. Mel had tried to protest, no doubt on Sabin’s behalf, but when Berith wanted something, he got it. It was one of the perks of being a prince of Hell, Sabin supposed.

“How am I supposed to resist this man?” Berith asked as he caught Mel’s hand and kissed its palm.

Mel flushed deeper. “You’re a smooth talker, but I really need to go. Besides, you have work to do.”

Mel leaned closer, and Sabin looked away as he and Berith kissed. It was odd to see Berith act like this with anyone, let alone a human. Berith wasn’t the worst prince of Hell, not even close, but he’d never been this soft. He was behaving this way only because Sabin and Mel were the only people around, but still. Sabin had never seen this side of his friend and boss until the human had appeared, and while he was glad Berith was happy, he still didn’t know what to think of all of this.

The sound of his office door opening and closing made him look up. Mel was gone, and only Berith was left in his chair on the other side of Sabin’s desk. He’d linked his fingers together on his stomach, and he was staring at Sabin.

Sabin schooled his expression. “Are you done cuddling Mel?”

“Unfortunately. What were you thinking just now?”

“Is that right? You do know that most princes of Hell would have your head for saying something like that, right?”

“And I should care why? You’re not most princes of Hell. You won’t stick me in the dungeon just because of what I said.”

Sabin was, although he’d die rather than acknowledge that right now. Besides, Berith knew he was aware of it. “Are you finally ready to go to work?”

Sabin went over the latest numbers on how much the palace spent every day and how much it earned. He had detailed charts, but Berith never wanted to see them. He trusted his accountants, and they’d never betray him. They were very much aware of what would happen to them if they did.

Berith might be one of the nicest princes of Hell, but it didn’t mean he wasn’t a demon. Besides, Sabin kept an eye on them. He wasn’t nearly as trusting as Berith.

“All of this is boring,” Berith lamented. “Can I go now?”

“Depends. What are you planning on doing? Work, or spying on Mel while he’s working?”

Berith’s expression told Sabin he’d nailed it. He had been planning to spy on Mel.

Sabin shook his head. Sometimes he didn’t recognize his friend. It wasn’t a bad thing, because Berith was happy, more so than Sabin had ever seen him, but it could become a problem if other princes of Hell and demons realized what was happening. They might not attack Berith head-on, but they wouldn’t hesitate to try to take out Mel. Mel was human, and he wouldn’t be able to defend himself.

Although he’d had to defend himself the last time a demon attacked him. He’d used a vase, and while it wouldn’t have been enough to kill the demon, it had bought Mel enough time for people to notice what was happening and run to protect him.

“What will you do once you’re on the road and you can’t spy on him all the time?” Sabin asked as he stacked his files together.

Sabin stared. “You can’t tell me you don’t remember. We’ve been talking about it for weeks.”

“You have to get on the road soon to visit your vassals.”

It was an unfortunate but necessary job. Every few years, Berith visited the people who lived in his territories. He listened to what they had to say, made lists of things they needed, and ensured they got those things. It kept people happy, and it made sure they didn’t betray Berith or move on to another prince. The princes of Hell were some of the most powerful demons in Hell, and they were always trying to kill each other. Berith mostly managed to stay out of the way, but sometimes even he was targeted. Keeping his people happy meant he didn’t have to worry about them betraying him.

“It is, and you’d know it if you listened to me when I talk.”

“I can’t leave the palace.”

“Well, too bad, because you’re going to have to. You know this is necessary.”