Two men. One Christmas Eve that changes the courses of both their lives.

Henry’s homeless and only wants a warm place to sleep on the coldest night of the year. A forgotten open window in a darkened house entices him inside with the promise of warmth and comfort. He knows it’s wrong, but he promises himself he’ll be out before the owner wakes on Christmas morning.

Except he oversleeps and the homeowner, Jim, discovers a bearded stranger sawing logs under his dining room table. When the shock and the drama that ensues dies down, Henry and Jim discover they might have found, quite unexpectedly, the Christmas miracle they’d both been longing for -- love and home. 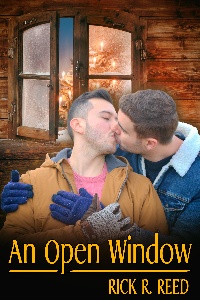 Jim shivered -- which reminded him that he’d left the window open downstairs. Oh Lord, his gas bill would be sky-high for sure! He went into the bathroom and grabbed his flannel robe off a hook on the back of the door, and then slid into fleece-lined slippers, remembering sadly there was an identical pair gift wrapped for Barry under the tree.

He hurried downstairs to close the window.

As soon as he got to the bottom step, he stopped in his tracks. His hand flew to his mouth to stifle a gasp or maybe even a scream. What on earth?

He stared for the longest time, wondering if his eyes were deceiving him, as they had when he’d seen the vision of Barry lying next to him in bed.

But that vision was a kind of wishful thinking. This was ... What should he call it? Horror? Terror?

A man lay under his dining room table, the throw his grandmother had crocheted years ago covering him. Breath suspended for the moment, Jim took in the guy. He had a heavy beard covering the lower half of his face. His hair, dirty, long, and stringy, was still, in a sort of freakish way -- lovely. Strands of gold mixed with sandy brown and an even darker color, almost black. He looked to be tall. His feet, clad in a pair of black Chuck Taylor’s worn almost beyond recognition, stuck out from beneath the covering.

He snorted once, and Jim let out a gasp -- a good thing because it jolted him back to breathing normally. He backed away from the figure under the table, blinking, hoping the man lying there in his dining room was some sort of Yuletide vision -- like Santa and eight tiny reindeer -- and that if he blinked enough times, he’d see only the braid rug under the table and not an out-of-place man, who might just be a robber, serial killer, or rapist.

But if he’s any of those things, would he really take the time out of his mayhem and evil plans to take a nap like a dog under the table?

Jim sat down for a moment on the bottom step of his staircase. He tried to quell the trembling in his hands, the fear causing his heart to race. A bead of sweat, crawly, slid from the nape of his neck, down along his spine. He told himself that whomever the guy was, he most likely meant no harm. He also told himself that the nearest phone was on his nightstand upstairs, and he probably had time to get up there and dial 911. He knew that’s what he should do, along with creeping outside while he waited for the police to show up. But something he couldn’t quite explain kept him rooted to that bottom stair.

He leaned forward again to glance over at the man.

Of course! Why didn’t it come to me before? He’s homeless. Jim felt something well up, a lump in his throat, at odds with the very real terror he was experiencing. The poor soul had nowhere to sleep last night, and he crawled in my stupid open window!

Jim had thought his Christmas Eve was terrible, with its dashed dreams of romance, its betrayal, and then there was this guy, who had more important things on his mind -- like trying to stay alive in close-to-zero temperatures, like where his next meal was coming from. Jim felt a little ashamed at his angst the night before over something that really didn’t count -- not when faced with something like what was right in front of him. The poor guy! Jim couldn’t imagine being out in that cold with nowhere to call home.

It broke his heart.

A Boyfriend for Christmas (MM)
Iyana Jenna
In Shelf
$0.99