A very long time ago, in the very old forests of Brittany, a werewolf loved a king ...

The Lord Bisclavret has a secret. A family enchantment. A wolf's curse, transforming him when the moon is full. He hopes to be a good lord for his people, and he's always been a loyal king's man, even if the new king is inexperienced and scholarly. But one betrayal might leave him trapped in wolf-shape forever ... unless his king can save him.

Andreas would rather be a University scholar than a king, and has no interest in a royal marriage -- desire's always come slowly, if at all. But he loves his kingdom, so he'll try to protect it, even when rumors of a man-killing wolf spread across his land. He'll pick up a sword and go out on a hunt, and hope to keep his people safe.

But the wolf has the eyes of a man, and the scholar-king's knowledge of folklore and fairy-stories might break a werewolf's curse ... with the help of love.

Very loosely based on the twelfth-century story by Marie de France, Bisclavret features a bisexual werewolf lord, a demisexual king who'd rather be a scholar, some exasperated men-at-arms, and very important stolen clothing. 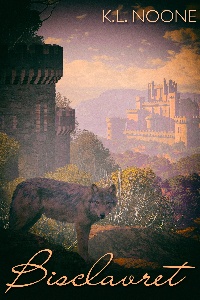 When I came back to myself, I was running.

I'd known I was running. I knew how my body moved and darted and gathered speed. But this was not the joyous bounding of the chase, the blood-hot passion of the predator in pursuit. I was panicked, the wolf in flight, terrified and desperate. For a moment, disoriented, I had no idea of what could have called me back, catching the last vestiges of my mind with its familiar sound. Something I knew. Something human.

I heard it again, closer. A hunting horn. The King's hunt. What had I done?

And I ran, with the King's hunters behind me, as I had never run before.

The arrows flew sharp around me. They shot to kill. The faces, as much of them as I could read through distorted eyes, were set and angry. Branches and thorns and long grass whipped at my coat as I fled, leaving ragged trails of fur behind me. They'd brought dogs; I could hear the baying.

I tumbled out into a clearing, gasping for breath, and landed under the hooves of a horse, flashing silver all around me. The horse flung itself backwards, twisting and flailing in alarm, and went down. The rider fell, hard, and the bow he carried went skittering away to land in front of me.

The bow. With the silver royal engraving. The King's bow.

Afraid to move, afraid of what I might have done, I crouched in place: ears flat and belly low to the ground.

No one came. No one had noticed yet; the King had become separated from his hunting party. He was alone.

Easy prey for a wolf, of the four-legged or two-legged variety.

He moved. Slowly. Pushing himself up. He held his right wrist awkwardly; I thought it might be broken, or least sprained. He was older than I had recalled, though still young for a king and still all golden fairness beneath forest-dirt and shock-white skin. He'd been younger at his coronation; I can see him now, in the memory, a young man fighting to remain stoic in the wake of his unexpected inheritance. I'd been impressed, then.

I still am, of course. Every day.

If the King was older than I'd thought, I remember thinking, how much time had passed? Or was it simply that I'd not been to Court for years, and he'd grown in height and lean muscle along with that scholar's inquisitiveness?

He looked at me, all wide hazel eyes, and I could see him wondering how much time he had before I would strike. Whether he could defeat me with a belt-knife and one useful arm, or whether he would die here, alone, like any other wounded animal separated from its pack.

I had, I thought, one chance. One chance to make this man believe me.

I lay down, cautious and submissive. I rolled over, exposing my stomach.

He watched me. He did not move.

I whimpered and whined, like a frightened palace dog. I stayed still as he finally got up.

He went to the horse first, though keeping an eye on me: checking it over, ensuring that it had taken no lasting harm from its fright. That was the first time he surprised me, though not the last: even wounded, Andreas puts others first, and we won't dwell on the summer fever and the hospital work among the ill and the risk to his own health, because we'd had a real fight over that, one of our few.

He looked at me when he finished with the horse -- well-trained, it stood patiently in place -- and then took a few hesitant steps forward, and lowered himself clumsily to my level, holding out the uninjured hand. I did my best to look harmless, not an easy task in that particular form, all weight and teeth and power.

I shook my head. Cursed the canine shape of my jaws and tongue.

"Can you understand me?"

I nodded. For good measure, thumped my tail.

I nodded again. As a short version of the story, it would suffice.

The gorgeous hazel eyes hardened, just a bit. "Why did you kill the Lord Bisclavret?"

I what? Obviously I hadn't murdered myself --

But of course my wife and Edgar would have seized upon the excuse for my death. It'd be easy: wave bloodied clothing, found in the forest. Cry and wail and mourn. Find comfort in each other. And no doubt they would even consider this a perfect means of bringing my death about in truth: after the hunt, I would not be alive to dispute their story.

I sat frozen, chilled to the bone despite layers of shaggy wolf's fur.

Everyone believed I was a killer of men. A vicious wolf, stalking the forest. No wonder the King's hunt had come after me. And who was to say I was not? Surely not me.

And I could put none of this into words. 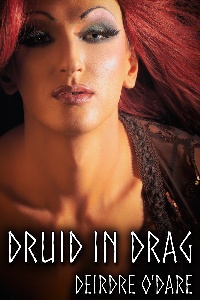 Frost and Raine (MM)
K.L. Noone
In Shelf
$3.99
Tweets by
sirenbookstrand