Wes Duncan lost his father and an older brother to bulls in the arena. Now he's working as a rodeo clown, determined to save as many downed riders as he can. He finds feisty little Tab immensely attractive but as his best friend's kid sister, she's off limits.

As much as he admires her spunk and determination, every time she comes out on a bull, he almost has a heart attack. What can he do to keep her safe? And if he gives in to his heart and his lust, who will keep her safe from him? Before they know it, Tab and Wes are caught up in a whirlwind of passion and misunderstandings. It takes a very close call to bring them to their senses and get Tab up for the ride of her life. 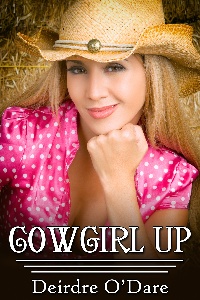 "What if there was another option, Tab, besides rodeoing for a living or going back home with your tail tucked? Would you still want to ride?"

She drew a slow breath and let it out even more slowly. "I don't know. Guess it might depend on the option. I mean I don't plan to ride for the next twenty years. I've had two good seasons, so I can't regret a minute of it, but I know I've been lucky. No bad accidents so far, but the odds are bound to turn against me in time. But meanwhile, I'm havin' me a blast while kind of rubbing pa's nose in it. He has to know what me and Gid are doing. Bet he hates every minute of it." Grinning at that thought, she then shrugged. "I haven't looked much past tomorrow, the next rodeo, the finals at the most. Not sure I want to."

Wes stopped, halted her and turned her to face him. He had his hands on her shoulders now, a gentle grip but one she could not seem to break away from. The heat from his hands sank into her body to settle somewhere low in her belly where a sudden urgent quiver began.

"I have a hunch Gid's going to be making some changes pretty quick. I look to see him and Ned Cunningham going into a joint business as stock contractors. And I'll bet Miz Ruthie will be part of his future, too. So where does that leave us, you and me?"

A small squeak of alarm escaped before she could control it. No, I'm not ready for a change. Why can't things go on just like they are now for a little longer? "You think? I didn't know it was near that far along yet. I mean, so soon?"

"Haven't you been paying attention, Little Bit? I'm thinking it wouldn't be real comfortable to be the fifth wheel there, not for either of us, even if we kind of hooked up, too. Sure we could probably both find some new travel partners but it wouldn't be the same. And I don't know if I can go on holding my breath every time you come out on a ride, 'specially a bull. But then I think what if I wasn't there and someone else was more worried about his own ass than savin' yours?"

The intensity in his soft words tore at her. He was opening doors she had resolutely been keeping shut tight. Before she could pull herself together enough to reply, his mouth came down over hers in a hard, hot, urgent kiss. All at once there was nothing brotherly about him at all.

He cupped her butt with one big, long fingered hand and lifted her into the erection straining at his zipper. A gush of moisture flooded her panties as their bodies ground together. Somewhere in the back of her mind a small voice was saying, Whoa, hold it. This is Wes, for gosh sake. What the blazes are you doing?

His other hand found her breast through her T-shirt and rolled a nipple under the thin fabric. She whimpered, clutching at his shoulders, tangling her fingers into the thick, rusty blond hair at the back of his neck. As from a distance, she heard footsteps crunching past in the gravel as an amused voice said, "Get a room, cowboy."

That wasn't necessary. They were almost to the camper. Dragging his mouth free of hers, Wes simply lifted her off her feet. She locked her legs around his lean hips and held on for dear life as he stumbled the last few steps, jerked open the door and thrust her inside. There was no time to unfold the couch that made into a double bed. They simply fell on it as they tore at each other's clothes. 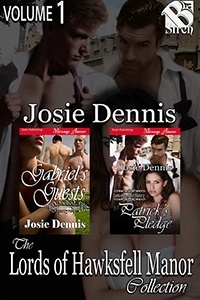