Rainn may fear tropical storms more than anything, but his love of flowers has landed him a gardening position on the Caribbean island of Dominica. Loneliness leads him to take tours with breathtakingly handsome local guide, Sam.

Sam is taken with Rainn, but not at all with the planned hotel where Rainn works as a gardener. Windemere Resorts is quietly destroying Dominica’s natural beauty, and now Sam and his friends hope Rainn will help them obtain information they need to stop the hotel from being finished.

Rainn wants Sam badly, but what if he’s being used? An out-of-season hurricane bearing down on the island makes his worst fear a reality, and now he must decide if he should break the law for Sam. Can he trust Sam with his heart and body? 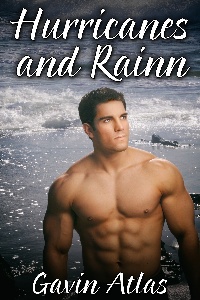 Rainn didn't know this song, but it had a regular groove, sexual and grindy. He soon found his rhythm. He saw Roger nearly choke on his drink and then scurry over to him and Sam.

Rainn laughed and felt himself blush. Sam turned and smacked Roger on the shoulder. Then he turned back and put his hand around Rainn's waist.

Rainn nodded. It was more than okay.

Rainn hated to sound like all he did was panic about storms, but it was on his mind. "So, I heard on the radio the activity east of here is almost definitely going to form Tropical Storm Alex. Isn't that crazy? I mean, it's only April."

Sam shrugged. "It's the dry season. Even if there's a fluke storm, it can't be that bad."

"I heard some of the other laborers say the trailers the Windemere has for us aren't hurricane safe. We're supposed to have places in the hotel to live in by June but ..."

"When I was little, I liked the rain because of my name," Rainn said. "I was staying with relatives in Houston for summer, and I was out riding my bike in a storm. I didn't want to go home. I was swept away in a flash flood and almost died. To this day I feel faint when I hear thunder."

"Sorry to bust in," said Cyprian. "But have you been working for that hotel for longer than the month and half you've been here?" Cyprian asked.

"Because you should know the people there are an evil bunch," Roger added. He was loud enough to be heard over the music. Again, several nearby men turned to look at Rainn. Sam said something Rainn couldn't understand, probably a rapid Creole. From the tone, Sam suspected it was something akin to "hush up."

"I've always wanted an evil friend," Roger said quickly. Then he smiled flirtatiously at Rainn. Whatever Sam then said to Roger sounded very similar to what he'd said a moment ago, but it sounded gentler.

"I love how you can't stop blushing," Sam said with a grin.

This was thrilling, Rainn thought. He was delighted by all the flirting, but he still sensed tension in the room. Clearly his employer bothered Cyprian. Roger and Sam, too.

Sam caught Roger blowing Rainn a kiss and pointed two fingers at him to tell him, "I see you." He said, "I love Roger, but I worry his big mouth, or his leering eyes, will get him in trouble sooner rather than later."

The song changed to something faster, and the crowd whooped.

Sam leaned in to whisper. "You are adorable. How sho -- uh, how tall are you?"

Whoa, what? Rainn felt a ripple of pleasure run through his body. He couldn't look at Sam but nodded. He felt Sam grab his butt. Delirium and lust shot through Rainn. It had been months since Rainn had been touched like that.

"Such a nice ass," Sam said. "You think I didn't notice? Because I did on all three tours."

"Wait. You noticed me even on the first tour?"

"I should have guessed you're part Indian. I noticed your beautiful brown eyes right away."

"I also noticed your shorts can't hide your gorgeous chunky ass. I have to have it."

Wow. Rainn gaped at Sam's brazenness. He loved it, but he couldn't believe it.

Sam burst out laughing. "I'm sorry. I'm sorry. I'm not normally like this. I think you may have put a spell on me because I've never said anything like that before."

Rainn wasn't someone who slept with a guy on a first date. He didn't know what to say. But he continued to dance, keeping his lower body within easy reach of Sam's hands. When the song ended, Cyprian was at Sam's shoulder, looking impatient.

"Kiss him already," Cyprian said. "It's past time we talk to him."

Talk to me? About what?