Michael wants to protect and provide for his mate, the man who owns his heart, but when he can't remember his life before being tortured and experimented on, his job options are limited. Jason doesn't seem to mind, he's happy on the ranch, but Michael can't help but feel he can do more.

The sudden arrival of their wolf king, after years of searching and waiting, puts all of his plans to a halt, and causes a shift in the pack that no one can properly define.

Jason's gift of making those he touches tell the truth can get him into hot water at times, especially if the King has secrets to hide.

The king's return can only mean one thing. Danger is near, and if Michael is to keep his promise to his mate, then he needs to be ready for whatever is coming. From outside the pack, or within.

Jason thought he was going to like having the king around.

Jack eventually made the rounds, shaking hands with Roger, the newest member of the pack aside from Thirteen.

Thirteen did not shake Jack’s hand, even when Jack held out his hand. Thirteen actually growled at him before turning and stalking off.

Henry, Thirteen’s mate, sputtered an apology before chasing down his mate.

Holy shit. What was that about?

But then Jason didn’t care as Jack approached him and Michael.

Michael held out his hand, his posture stiff, but Jack gladly took it. “It’s good to have you here, sir,” Michael said. “Everyone’s been…excited to have you back.”

“Not everyone, but I can understand. You all must have so many questions,” he said, glancing around, but then his eyes landed on Jason.

Jason couldn’t wait. He wanted to make an excellent first impression. He knew how he looked now would reflect on Michael, and Michael couldn’t even remember who he was before being kidnapped and experimented on by Alastair.

Jason held out his hand, body vibrating with all kinds of energy. “It’s really nice to meet you, sir.”

There. That sounded perfectly normal. He thought it did. Respectful without being all kiss ass-y, so at first he didn’t understand why Jack didn’t take his hand and shake it.

Jack looked at him, and then his hand, then back at him before smiling softly.

“It’s good to meet you,” he said, finally. “Your gift was to make others tell the truth, yes?”

Jack smiled softly, taking a step back. “I’m sorry, I know this won’t make sense to any of you, and it’s all right to not trust me yet, but there are some things I need to keep to myself.”

Jack didn’t give him the chance to finish, instead turning back to Erik and Dean.

Jason didn’t understand. He kept his hand held out for another second before realizing what he was doing.

He lowered it quickly, glancing around to make sure no one was looking at him.

Of course, some were, and his face flared up.

Jack had shaken the hands, and even hugged, almost everyone here.

He didn’t even touch Jason.

What secrets could he be scared of revealing? Didn’t he trust them?

Or…was it Jason? Was that a lie?

Did he do something? He’d just come from the barn, but he didn’t think he stunk.

Just in case, he checked his shoes to make sure there was no horse shit there.

“You okay?” Michael pressed his hand to Jason’s shoulder.

Jason forced himself to smile, squashing down the embarrassment he felt.

Michel just gave him a look. He didn’t say anything, though. As though he was worried that, while touching Jason, he might accidentally say something he didn’t want anyone else to hear.

That couldn’t be good.

Having Michael naked on top of him, looking down at him like he was some sort of snack, dick hard and eyes red, made Jason forget all about any blond-haired king, about making a good impression, about cooking, about doing anything other than pleasing the man above him.

His body clenched. He felt suddenly empty, and desperate with need to have his mate filling him up, stretching him with his gorgeous cock.

Jason reached down to touch it, wrapping his hand around the shaft, stroking and loving the way Michael’s eyes slid shut, how he sighed pleasantly.

As if Jason’s touch was taking away all the stress and anxiety he’d felt throughout the day.

Jason got to his knees, pushing Michael down onto the bed and settling himself between the man’s firm, muscular thighs.

He saw the interest in Michael’s eyes, knew his mate could tell where this was going as he breathed hotly over his dick.

“I’ll make it feel nicer for you in just a second.”

“Will you—oh,” Michael sighed, holding himself up on his elbows, head falling back as Jason wet his lips and let his tongue and mouth slide all the way down his cock.

Well, not all the way, but as far as he could get before he needed to use his hands.

Michael’s prick was big, especially when he was hard. Sometimes Jason couldn’t believe he could fit the man’s dick inside himself, but for the longest time they were together, at least in the beginning, Jason had gone out of his way to make sure he never saw Michael’s cock.

Being locked up together wasn’t exactly the best time for romance, and the first time they were together, it had been pitch black.

Which was a good thing, since Jason might have chickened out that first time if he’d actually gotten a look at the man’s dick.

Now, they’d been together enough that seeing his huge cock in broad daylight didn’t scare him. It made him excited. Jason loved sucking Michael off. He loved the feel of Michael’s cock on his tongue, and the sounds he made as Jason hollowed his cheeks and worked his jaw a little harder.

He didn’t even mind that his jaw was going to be sore after the fact. Not when Michael spoke so sweetly to him.

Sometimes all the compliments were embarrassing, but during sex, when they knew no one was watching them, Jason could tolerate it.

That, and the fact that Jason was touching him meant Michael had to tell him the truth, so he wasn’t blowing smoke up Jason’s ass.

Jason didn’t think he was much to look at, but Michael thought he was beautiful.

It was hard not to be flattered over something like that, and it made Jason want to try even harder to please the man.

So he did. He used his hands for the part of Michael’s dick that he couldn’t reach with his mouth, moving back and forth from his cock to his balls and back again. 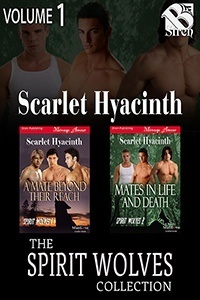 Mating with the Heir to the Throne (MM)
Marcy Jacks
$0.99
Less than 2 days left
Tweets by
sirenbookstrand