Love with the Next Door Neighbor (MM)

Mark Winston is mostly content with his life. He has a home, a job he loves, and a sister who always has his back. So what if the one thing he’s missing is a person to share that life with? Experience has proved he can’t get what he wants and needs out of a relationship. Yet he can’t stop wanting his next door neighbor and wishing there could be more between them.

Dylan Pomeroy might be young, but knows what he wants: Mark. He continually inserts himself into the older man’s life, determined to show Mark that he’s exactly what Mark needs. But Mark worries that the difference in their ages, and his need to be cared for, are hurdles too big to overcome.

But Dylan won’t be deterred, and Mark begins to realize his worries are unfounded. Dylan shows Mark he’s the perfect man for him. But years of being rejected for his wants makes it difficult for Mark to hope that things between them will work out. Can Mark let go of his insecurities and let himself fall in love with Dylan?

Love with the Next Door Neighbor (MM)

I jumped and whirled around to find Dylan peering through the open window, his face all but up against the screen. I didn’t clutch at my heart, but the adrenaline rush had it pounding hard enough to hurt for a few seconds.

“Jesus, kid. You scared the shit out of me.”

His waggled his eyebrows. “Not a kid.”

“Yeah, yeah.” I took a deep breath, willing my heart to calm, then squinted at him. “Usually people go to the door of someone's home, you know. They don’t peer in the window like a creeper.”

He waved that away with a careless gesture. “I would have had to walk past this window to get to the door, then stand there and wait while you got up from this very room, and walked to said door. I’m just saving us both time and energy.”

Shaking my head, I held in the chuckle that wanted to escape. “What do you want?”

“I’m cooking steaks, and I have that potato salad you like without the green olives. Come eat.”

I scowled. “Asking instead of demanding would be nice.”

“Nah. With you it better just to tell you what to do.” He took a step back, and his grin turned mischievous. “Get your ass in gear and get over here.”

“So fucking bossy.” I didn’t try to keep my voice down, wanting him to hear. I was rewarded by a wicked laugh, laced with something I refused to put a name to.

“You should be used to it by now. Get a move on. You have ten minutes.”

I sighed, and Dylan let out a sound that shouldn’t be allowed in public, but he said nothing as he turned and sauntered away. I watched him go until he disappeared, then stared for a few minutes longer.

I had no idea why I let him get away with bossing me around. No, that wasn’t true. I knew why I allowed it, but I needed to stop. He wasn’t a stupid guy, and the mixed signals would give him false hope. And yet I couldn’t seem to stop myself from arguing with him and then giving in when he got bossy and demanding.

I found him in his backyard not quite ten minutes later. He’d set his small patio table, and was just pulling the steaks off the grill. I sat in the chair he motioned to, and then just stared as he not only served me the steak but the potato salad and a beer. I almost made a comment about how he hadn’t held my chair, but thought better of it before I opened my mouth. I wasn’t sure what he would do had I said it, and now that I’d gotten the mouthwatering scent of the meat, I was starving.

We ate in silence for a few moments, and even though I was resolutely not looking at Dylan, I knew his gaze stayed on me the whole time. It took everything I had to keep my face neutral and not make a noise as I chewed and swallowed. Eventually, though, I looked up and gave him a small smile.

“Thanks for this. It’s really good.”

“Still don’t understand why you’re always feeding me though.”

He laughed, and my lips quirked at the sound. He had such a good laugh.

“Because I like to,” he said, merriment in his tone. “Haven’t seen you in a couple of days. How’s everything going?” 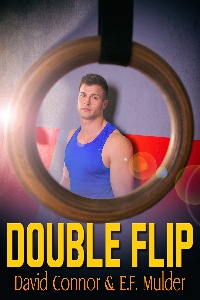 Bound to the Bodyguard (MM)
Marcy Jacks
In Shelf
$4.99
Tweets by
sirenbookstrand