Lucky and Stella Marshall are young, rich, and beautiful. There’s nothing they can’t do, and nothing Lucky wouldn’t give his bride. He is equally devoted to his best friend, Shane Norton. Lucky and Stella move into the Rio Hotel and Casino to be close to Shane -- and Shane proves his devotion to them by cleaning up their messes and taking care of them.

For Lucky and Stella, staying in Las Vegas means the party never ends ... even in death.

Can two ghosts learn how to love a man they couldn’t appreciate in life? 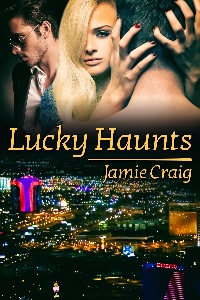 "If you touch him before he can see you, won't that make him think he's crazy?" Lucky asked.

"Oh." She withdrew her hand, though she didn't take her eyes off Shane. "Is there anything we can do that won't make things worse, then?"

Lucky laughed a little. "I think that's the first time we've ever considered that particular question."

Stella wore a bemused smile as she sat back on her heels, getting out of Shane's way just as he picked up a handful of receipts. "Yes. This is what we're supposed to do. We're here for Shane. The fact that we're worried about putting him in a straitjacket is proof of that."

Lucky leaned forward, putting his mouth close to Shane's ear. He pursed his lips and blew a soft stream of air toward him. He didn't expect a response, but the small hair around the curve of his ear fluttered. It was just a little bit, but Lucky almost shouted with triumph.

Stella lifted her brows, but did as she was told, sliding around to Shane's side. He was absorbed in flicking through the receipts he held, his profile strong, his mouth downturned. She slid her hand along his arm, from wrist to elbow, from elbow to shoulder, all the while tilting closer. The look on her face was pure concentration. Before her mouth could make the shape, her breasts brushed against his upper arm.

Shane's jacket curved under the soft weight. He jerked away from her in surprise.

"Did you see that?" Stella followed Shane onto the couch when he bolted backward and sat down. "I think he felt that."

Lucky sat on the other side of Shane. If he were solid, their thighs would be touching. He turned into Shane's body, intent on doing more than just tickle the top of his ear. If Stella could concentrate herself into solid form, Lucky felt confident he could do the same. He gathered all his focus and turned it onto Shane, noting the shade of his skin, the curve of his neck, the slope of his shoulder. He let Shane fill his world. Freckles dotted the skin beneath his earlobe--had he ever noticed that before?

Shane didn't jerk away as he had with Stella. He stiffened. He went utterly still and stared straight ahead. His pulse visibly pounded in his throat. "God ..."

Lucky licked his lips. "No, Shane, it's just me." He wanted to glance over to Stella, he wanted to shout, but he didn't dare let anything break his concentration. "Us. If you can hear me...what's my favorite drink?"

Shane snorted but didn't move, didn't even change his visual focus. "Anything with alcohol in it." He closed his eyes and muttered, "Jesus, I am completely losing it."

"Well, obviously. My favorite drink is a vodka tonic. In fact, I could really go for one of those right now."

"But he heard you!" Stella glowed with excitement, pressing closer. "You heard us, right, Shane? Tell me you heard that."

Goose bumps rose on the back of Shane's hands, disappearing into his shirtsleeves. He took a deep breath, and then another. "I did. Which means it's official. I'm crazy. I need you guys so badly, I'm making you up."

Getting Off: MMF Menage Romance
Kat Logan
In Shelf
$2.99
Tweets by
sirenbookstrand