Submission to Desire: For Their Love of Brenna (MFM)

Royce Harley and King Taylor loved their wife’s playfulness, especially in the playroom, but had begun to sense a desperation in her submission that worried them.

They realized her need to play was her way of reassuring herself that they wanted her and not the submissives that visited the club they ran.

Anxious to reassure her, they changed tactics, desperate to establish the intimacy the three of them so desperately needed.

The flood of emotions pouring from her had them falling in love with her all over again, their tenderness getting through to her when nothing else could.

Happier than ever, they didn’t realize that the biggest threat to Brenna didn’t come from the submissives, but from a Dominant with an axe to grind.

They’d taken his submissive from him, so he would take theirs.

And since they loved her, the pain he inflicted would be even worse.

Submission to Desire: For Their Love of Brenna (MFM) 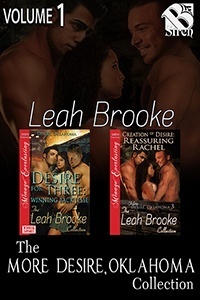 Brenna Harley-Taylor looked up from her dinner, eyeing her two husbands, who both smiled back at her. “You know, sometimes I still have trouble believing that I’m married to both of you.”

Royce Harley could have made a fortune as a model, his lean muscular physique, shoulder-length curly black hair, and a face that appeared to have been carved by the gods themselves made him so good-looking that his loving smile still had the ability to make her heart beat faster.

King, on the other hand, had more masculine features and could chill with a glance.

He wore his dark blond hair short in a military-style cut and had a body covered with corded muscle.

Both stood much taller than her, were sexy as hell, and made her feel deliciously feminine.

Royce reached out to run his finger over the emerald stone attached to the collar she wore, one that matched the stones in her wedding band, his eyes dancing with amusement. “I would think you’d be well adjusted to that fact by now.”

King raised a brow, his lips curled. “It’s a lesson I don’t mind repeating. Does this have anything to do with the bag you brought home with you from the lingerie store?”

Smiling, Brenna slid a hand from the stone on her choker downward, following the material of her low-cut dress to the curve of her breast, amused and aroused that both Royce and King followed the movement with their eyes. “It’s supposed to be a surprise. Do you always have to know everything?”

King smiled faintly and took a sip of his beer. “Concerning you? Absolutely. So what’s our surprise?”

Smiling and already aroused at the thought of their reaction to her purchase, Brenna reached for her wine. “You surprise me all the time. This time, I want to surprise you.”

Sitting back, she slid her foot from her high-heeled shoe and ran her toes up King’s leg. “You’re going to be busy tomorrow and tomorrow night with the auction. I see how eager they are to get one or both of you for themselves.”

King frowned and reached down to caress her ankle. “You don’t really think we’re interested in anyone but you, do you?”

Brenna shrugged, hating that she couldn’t help but doubt her ability to hang on to two such amazing men. “I know how much you like variety. When you’re surrounded by all those naked women, I want you to remember that you have a wife upstairs who’s more than willing to satisfy those decadent hungers.”

Royce smiled, raising a dark brow. “Decadent hunger? Is that what you call it?”

His eyes glittered with amusement and heat, his long hair loose now, the curls touching his shoulders, but it would be tied back when he walked into the playroom.

Brenna smiled when King caught her foot and lifted it to his lap. Turning to him, she wiggled her toes. “What would you call it?”

Leaning closer, Royce ran a fingertip over the back of her hand and down to her wedding band. “I call it love and lust for my incredibly sexy wife, with whom I get plenty of variety.”

She pouted, aware that both of her husbands’ gazes settled on her bottom lip. “Do you still feel that way? Maybe you’re getting bored with me.”

King took her foot and pressed it against his erection. “Never. I knew we should have gotten a privacy booth.”

Royce shrugged. “They were booked. Besides, our little sub is too loud when she comes to take her here.”

King smiled and ran his hand up her leg, running his fingertips over her silk stocking and to the spot at the back of her knee that drove her crazy. “Even when we gag her. Do you want dessert, Red?”

Brenna giggled, her pussy clenching. “I don’t think what I have on under this dress is going to allow that.”

Royce sat forward, his eyes narrowed, the look of a Dominant. “What do you have on under there?”

Brenna smiled. “I know how much you like dressing me in black.”

She’d bought a leather corset with cutouts at her breasts, slit, and bottom, trimmed in the lace that matched the top of her stockings.

Unable to stop smiling, she pulled her leg from King’s grasp and straightened, reaching for her wine again. “A little leather. A little lace.”

Royce lifted his hand for the check, his eyes raking over her. “Your bag was from the lingerie shop.”

Brenna ran her fingertip over the rim of her glass. “I stuck the bag from Logan’s Leathers inside.”

King’s eyes narrowed dangerously. “We take you to Logan’s store ourselves.”

Amused, Brenna sipped her wine again. “You don’t have to worry about him measuring me. He has all of my measurements on file.”

Reaching out, she ran her fingertips up his arm. “Besides, the places you don’t want him to measure are cut out.”

King grinned and stepped between his wife’s firm thighs and ran the glove over her breast while flicking his tongue over the nipple of her other one.

At her back, Royce touched the tips of the leather tails to her back, smiling at her soft cry. “She loves the feel of leather.”

“That she does. Along with those soft feathers on the end.”

Neither one of them could ever hurt her, but her sensual nature meant that she loved the differences in textures, something both he and Royce had discovered.

Soft fur and the leather of a whip.

She loved it when they touched her, and he damned well wanted to feel her.

Brenna stiffened when both the crop and the glove slid away, wishing she could hear Royce and King.

She waited breathlessly, gripping the chain above her cuffs with one hand, careful not to drop the handkerchief, and tried unsuccessfully to close her thighs against the ache at her slit. She stiffened with a gasp when she felt the heat of King’s naked body against her inner thighs, his cock hard and hot against her slit.

A moan escaped at the slide of the fur over her breast.

She felt Royce move in behind her, the head of his steely cock pressing insistently against her puckered opening, his hands closing on her hips and tilting her ass toward him.

Her puckered opening burned as he entered her, the feel of the leather strips from the whip he held trailing down her back arousing her even more.

Although she couldn’t hear him, she would swear that she could feel King chuckle as he continued to slide the fur over her left breast while closing his lips over her nipple on her right breast.

As Royce thrust his hips forward and his cock impaled her, King covered her mouth with his, swallowing her cries of pleasure and the shock of being so overwhelmed, a sensation she experienced every time they breached her ass.

She loved it and knew if she challenged them, they would take her there.

King kissed her shoulder, his closeness allowing her to lean against him as Royce fucked her ass.

Royce’s hand tightened on her hip, a signal that she recognized.

Brushing the strips of leather over her back and upper curve of her ass, he moved faster, taking her harder in a way that would allow him to come but not last long enough to send her over despite her own arousal.

Crying out against King’s mouth, she clenched on Royce’s cock, the light slaps with the leather against her thighs and the burn of Royce fucking her ass with hard, shallow thrusts designed to give him pleasure while leaving her needy for King.

If she didn’t know how much her husbands loved her, she might have felt used, but she knew that they used such a tactic when she’d dared them and also because it would make her orgasm even more intense.

She needed to come, her body primed for her husbands’ ministrations in a way she’d never dreamed could happen.

Harsh moans of frustration poured from her, moans that King swallowed as he held her against him. “Please! I need to come, damn it!”

Royce suddenly closed both hands on her hips and thrust into her several times in rapid succession.

Stilling, he held her while his cock began to pulse inside her, his sudden withdrawal leaving her on the edge of orgasm.

Removing the headphones, he bent to whisper in her ear. “No. You come when we allow it, brat.”

King chuckled and kept her face pressed against his shoulder. “Poor baby. Does that ass need to be filled with cock?”

Chuckling again, he kissed her temple while running the glove down the center of her body to her mound. “I know. It must be rough to beg someone you hate to fuck your ass.”

“Bite me.” She writhed against her bonds, her pussy soaked and her ass clenching at emptiness and burning with awareness.

Royce stepped back and flicked his wrist holding the handle of the whip, sending the leather strips attached to it to slap against her ass and the back of her thighs over and over, leaving an overwhelming heat in its wake. “After I heat it up a little.”

Brenna moaned at the heat, knowing that he could have done it harder and inflicted pain and loving him even more because he did it in a way designed to heighten her arousal.

The thought of another woman experiencing such bliss at their hands made her crazy to surrender completely in a way that gave them the challenge they both loved.

Wishing she could see King, she wiggled and cried out when Royce repeated his ministrations on the other side, whimpering when the whip hit the floor and he and King traded places.

Standing between her thighs, he removed her blindfold just as King pressed his cock against her puckered opening.

Smiling, he kept her face tilted to his as King gripped her hips and thrust deep. “There she is. I love that look in your eyes and that desperate cry when your ass is filled. Now I’m gonna watch you come while King fucks that tight ass.”

Releasing her wrists from the cuffs, he wrapped her arms around his neck and held her against his chest while King held her hips and used the swing to move her on his cock.

Impaled over and over on his thick cock, Brenna clung to Royce, the feel of his hot body against hers and the grunts and groans coming from King layering over the pleasure and making it hotter.

King slowed his strokes and went deeper. “That’s my girl.”