Mercy of These Bones (MMF)

Four years ago, Mathias Larsen broke siring laws to save a lover’s life.

Four months ago, that lover turned on him, leaving him for dead.

Now Mathias has followed her path of death to Las Vegas, straight to the last vampire who wants to see him: his sire. The man he left for a woman who stabbed him in the back.

Edmund has found love again with a nightclub owner, the very human Darby Bell. He doesn’t want to believe Mathias’s warnings, but a murder that hits too close to home gives him no choice. While he struggles to keep Mathias and Darby safe, emotions run high as old love collides with new.

But the clock is ticking. The vampire Assembly is coming to town, the local police are alerted to Mathias’s nocturnal activities, and passions are flaring high. Time is running out. By the time death strikes again, all bets are off. 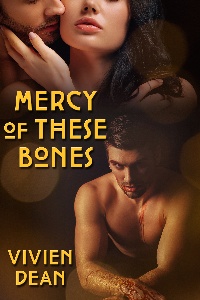 Mercy of These Bones (MMF)

With a frustrated curse, Edmund shoved Mathias away, watching him stumble slightly as he hastened to put as much distance as possible between them. His lips parted to utter the query one more time, then froze when he got his first good look at Mathias’ face.

The eyes were still the same, the same intense hazel that bored into you with barely a fleeting glance. The mouth was the same as well, all succulent and begging to be kissed. But it was the sight of the livid scarring across his cheekbone, skin puckered and healing from an array of not-so-long-ago burns, that made Edmund’s gut churn, and some of his fury dissipated at seeing it.

Mathias fidgeted under the scrutiny, but when he tried to duck his head, averting the scarred side of his face, Edmund closed the distance between them, grabbing the other vampire’s jaw and forcing him to lift his eyes.

“Did she do this?” he asked, his voice low and terse.

“No, it’s the latest craze in Warsaw.” He swatted Edmund’s hand away, though at least he didn’t try to hide again. “Of course, she bloody well did it. Threw a bottle of holy water to distract me right before she tried to put a quarrel through my chest.”

To keep from reaching out again, Edmund folded his arms over his broad chest and took a step back. “Sounds like a lover’s spat to me. What happened? You sire somebody else without telling her?”

It was a low blow, and Edmund knew it.

Mathias didn’t even flinch. He didn’t say a word for several minutes.

The two men regarded each other in silence, each waiting for the other to speak. Finally, Edmund couldn’t take it anymore.

“You cut your hair.”

“We’re not getting back together.”

Edmund’s jaw snapped shut. It took a serious effort of control to find his voice again. “Then why are you here?”

Mathias blinked. “Because Tati is. And I think she means to try and kill you next.”

He might as well have said he was in town for a drag queen convention. It would’ve surprised Edmund less. “I haven’t seen either one of you since I left you in Moscow. Why would she come after me now? I left, didn’t I? You made your choice, and I let you two at it. End of story.”

“It would be nice if it was that tidy, wouldn’t it?” The sobriety that had settled between them lifted with the shift in Mathias’ tone, and he sat on the edge of a table stacked with paper goods. “All I know is that I barely got away from her and her hired hands with my fangs intact. When I was healed enough to try and find her, to suss out what the bloody hell her little stunt was about, she’d scarpered off. I’ve spent the last four months tracking her. Two weeks ago, she showed up here. It only took me a day to find out you were here, too.”

“Why not come to me directly then? Why pull this shit with Darby?”

Mathias grinned. “Because I’ve got eyes and a prick. You really think I could resist a tasty little morsel like her?”

With a snort, Mathias shook his head, waving the threat off with a dismissive hand. “Consequences mean bugger all to me anymore. I just want answers.”

“Well, you’re not going to get them from Darby.”

“Look ...” Mathias rose again, stalking back to stand right in front of Edmund. “All I wanted was to get you on edge, light a fire under you to start looking over your shoulder, because, from what I can see, you’ve gone soft, mate.” He cocked his head. “The girl got you so whipped you forget you’re a vampire?”

He swung on both old and new instinct, the familiar goading working to rile his blood, the disrespect to Darby rankling even more. Whether Mathias chose not to duck because he didn’t see it coming or because he welcomed the blow, Edmund didn’t know. He only knew the satisfying crunch of his fist slamming into Mathias’ jaw, and the ensuing crash as Mathias flew into the opposite wall.

“About bloody time,” Mathias muttered as he tried to extricate himself from the boxes he’d crushed. “Thought I was going to have to throw Tati in your face again to get you well and truly brassed off.”

Edmund scowled, but before he had the chance to say anything, the door flew open to reveal a very determined Darby, her pistol firmly in her hands.