Natalia Tyler didn’t expect to mate. Ever. Her duty was to the elders. It was her fate in life to stay with them and help. She’d promised her mother. As her mother passed from this realm to the next, Natalia made her pledge.

Jonas and Noah Larrington were cougar shifters that had been looking for their mate. They’d always known that they would share a woman. It happened frequently with brothers. The moment Noah met Natalia he knew she was theirs. It was destined by the Mother. There was only one mate for them and Natalia was it.

When Natalia’s bear screamed mate, she fought it. She’d made her commitment. She’d promised. Noah and Jonas knew Natalia was theirs. Convincing her of that wasn’t the problem, getting her to leave the only life she’d ever known was the challenge. When Natalia disappeared would they ever find her?

Noah couldn’t wait to find his brother and tell him the news. He’d finally found her. Their mate. He was sure Natalia Tyler was the one for both of them. He and Jonas had enjoyed their lives so far, and finding their mate would make things perfect.

The timing wasn’t the best, but they could work around that. He was elated to have finally found her. He and Jonas had enjoyed women in the past and had known they were destined to share a mate when the time came.

As he walked through the village, he felt like skipping. What would his patients think if they saw their gruff doctor grinning like a fool as he skipped through the streets? He didn’t care. He was so elated to have found her.

He made his way to the place where his brother was meeting with the town alpha, Robert Gilbert, and waited impatiently for his brother to come out. He knew that Jonas would have heard through their shifter connection and was surprised he hadn’t gotten a response yet.

It was only a few minutes before Jonas joined him, looking as frustrated as Noah felt. “That man is the biggest dimwit I’ve ever met. I wish Sean and Ethan were here.”

“Where are they? What’s going on, Jonas?” Noah let his news wait. His brother needed to vent now. He could tell him about their mate later. She wasn’t going anywhere, and neither were they.

“The idiot sent them on an errand up north. With everything that’s going on, he needs all his enforcers here. None of us know when the people that have been raiding the villages will strike next. Jaxson is the only one left, and that won’t do. I offered to send some of our men, but he refused. Something is going to happen soon, Noah. Something bad. I can feel it. I can’t force him to take help. It’s so frustrating.”

They had arrived at the SUV they were using, and both got in. “Before we go, I have someone I want you to meet. If I’m right, she’ll be with the elders. If not, they will know where to find her.”

“She?” Jonas turned to look at his brother.

“Have you not been paying attention? I’ve been sending you messages all afternoon. I found her.”

“You mean… I tuned everything out. I was so frustrated with that ignoramus and trying to explain the rumors and things I’ve heard from the other alphas that I didn’t want to be distracted by anything.”

“Yes, I mean our mate. Her name is Natalia, Natalia Tyler. She’s a bear shifter. She’s young. Younger than I’d thought she would be. From what the doctor here told me, she lives and stays with the elders. She lost her mother a few years ago, and even before that, they always lived and helped with the senior shifters. She’s very close with them.”

“That could be a problem.” Jonas started the car.

“It’s nothing we have to deal with tonight. I need to get home, and so do you. We’ll try to get back often to see her. Maybe we can convince her to move with us eventually. If we can’t, her animal will.”

Jonas drove them to the part of the village where the elder’s stayed. “Tell me more about her.”

“She’s beautiful, her spirit glows. She’s kind. She’d brought one of the elders in for his clinic visit and I could tell how much she cares for others. I can’t wait for you to meet her.”

“There she is.” Noah jumped out of the truck and waited impatiently for Jonas to join him.

“Natalia,” he called, dragging Jonas behind him.

“Yes,” she answered, turning. “Oh! Noah is this your brother?”

“I told you she was beautiful.” Noah stopped in front of Natalia. “This is my brother Jonas. Can you come and talk with us a while?”

“Yeah.” Nat turned to the person she’d been speaking to. “I’ll be back soon Alfred. Don’t try to stand until someone is here to help you.”

“I…I can’t talk long. I need to help Alfred.” Natalia looked over her shoulder at the man she’d brought to the clinic earlier.

“Jonas wanted to meet you. We want to get to know you better and see you again.” Noah reached for her hand.

“I…I don’t know. I…” Someone called her name and she turned. “I need to go. My help is needed. It’s very nice meeting both of you. I have to go.” She turned and walked swiftly towards the person that had been calling her.

“Once the mating is started, it has to be completed. Are you ready for that tonight?” Noah asked, threading his hands through her hair and raising her head so that he could look into her eyes.

“You don’t want to?” Nat asked in a small voice. She’d spent more time with Jonas, and though her bear knew both men wanted her, and she wanted both of them, maybe Noah wasn’t ready.

“I want you and your bear with every piece of my heart. My cougar purrs at your nearness. Your soul touches my soul. It is an honor and a pleasure to know you feel the same for us. I’ve never wanted anything more in my life. It’s a big commitment, and I want you to be sure.” Noah’s free hand reached for her face to cup her cheek.

“You are precious to both of us, and we both want nothing more than to mate with you. These last few days of being close to you and not claiming you have been torture. No one and nothing will ever mean more to us than you and any cubs/kittens you and the Mother see fit to provide us with.” Jonas started placing a line of small kisses up her back.

“Never think we don’t want you. We will always want you.” Noah used his hand threaded through her hair to guide her mouth to meet his. “Straddle me, baby, I’ll show you how badly we want you.”

Jonas helped her move until she had one leg on each side of Noah’s hips. “Relax, osita. We’ll take care of you.”

“I don’t know what to do.” Natalia shifted restlessly.

“Reach and fit my cock into your pussy. Just let yourself slide down. Go slowly.” Noah put a hand on each of her hips and eased her onto him.

Jonas moved behind her, and she felt him parting her ass cheeks.

“What are you doing?” she asked, trying to concentrate on Noah.

“He’s just playing a little, love. Relax and let him in.”

“This is just the tip of my little finger. One day Noah and I will want to take you together.”

“Relax and let him in, osita. Jonas will make it good for you.”

She felt Jonas push against her and couldn’t help tensing.

“Easy, let me in,” he said against the skin of her neck. “Imagine both of us taking you at the same time. Noah in your pussy and my cock in your ass. Have you ever thought about that? What it would feel like to have two men loving you at the same time?” While he was talking, Jonas pushed his finger in a little deeper with each word.

“One day soon, we will take you together, my little bear, and you’ll fly among the stars when we do.” Noah eased her pussy down on his cock, stretching her pussy with each upward thrust.

“I know, baby. I’ll help you.” Noah reached one hand up to pull her face down to his for a deep kiss, his mouth and tongue tasting and teasing her.

Jonas reached between her and Noah and started rubbing her clit, making her even more frantic. He leaned in and brushed her ear with his lips. “You might feel a pinch of pain. That is your gift to us. Ease down and take him all the way inside your pussy.”

He used his other hand on her hip and helped her slide her way down. He felt her stop as Noah claimed her and increased rubbing her, knowing her need would overcome any pain she might be feeling.

“Ohhh,” she moaned as Noah breached her gift to them.

He released her mouth and brought one hand up to her hair. “Thank you,” he said before taking her lips again. “I have never felt more honored than I do at this moment. This is something I will treasure for the rest of my life.”

He moved both hands back to her hips and started lifting her up and down, showing her how to ride him. Then he moved, flipping them so that she was lying under him with Jonas beside them.

He braced one hand next to her shoulder and began to move faster, pounding into her pussy as his release neared. “Help her, Jonas,” Noah panted, moving faster. 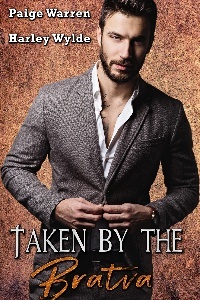 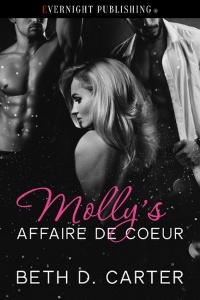