My Only Home (MM)

The night before Noah Hill left his hometown of Mountain View, he had a drunken sexual tryst with his best friend, Lucas Wesson. Deeply in the closet, Noah is horrified at his behavior, and terrified of what Lucas would think of him. He left the next morning without saying goodbye, and effectively cut off all ties. He returns five years later to help his father, and runs into his old best friend almost as soon as he reaches town. And nothing has changed. He still loves Lucas, and he still can't stand to meet the other man's eyes.

Lucas has been through a lot in the past five years without his best friend's support. A marriage. A divorce. A child. Running his own business. He also remembers his one night with Noah with perfect clarity. For five years, he only wanted Noah to come home. But now that Noah is back, things have changed too much to ever be the same between them ...

My Only Home (MM)

“We shouldn’t have got married. I thought ... well, I thought if we were married, she’d change. She’d get better. It doesn’t work like that.” Luke smiled and shook his head. “We tried for about six months, and then she left. Lily was about two months old at the time.”

“Did you marry her because she was pregnant?”

“It was the right thing to do. When she left, she was pretty angry. She wouldn’t let me see Lily, but I sent her money every week. Every penny I could afford. And Marty called me every night, and took pictures, and it sucked, but it was the best I could do.”

Noah took a long gulp from his beer, because he didn’t know what else to do. He couldn’t imagine the shit Lucas had gone through, and where was he? Was he helping his best friend? Providing any sort of support? Did he even fucking know?

“It may have gone on like that indefinitely. You know how stubborn Lilah could be. Except, she was drinking. Heavily. Marty finally called social services, and they took Lily away from her. Eventually, I got full custody, and a court order that Lilah could have supervised visits as long as she went into rehab.” Lucas spoke in a tired monotone, like all his emotional responses to that episode had been deadened.

“Where were you?” Lucas blurted, with the first hint of anger Noah heard from him since he arrived.

Noah was happy to hear it. He deserved it. But he didn’t know how to answer the question.

Lucas didn’t give him the chance to pull his staggered thoughts together before he launched into his own rant. “I tried to understand, I did. When the entire goddamned town thought I was trying to kidnap my own child, and I didn’t have a friend in the world, I tried to understand why you were gone. You couldn’t send me a card? You couldn’t call just to say hey? And I thought maybe I’d never see you again, and I could come to terms with that because I thought I knew why. So why are you back now?”

“Because ...” Noah swallowed around the lump in his throat. “Because of what I did.”

Now Lucas looked more perplexed than angry. “What did you do?”

Noah stared at him. “The night before I left? Up at the lake?”

Noah frowned, his confusion deepening. “What the hell happened up there? I kissed you, right? I wasn’t just imagining that.”

Luke was looking at him like he had grown a third eye. Noah shifted uncomfortably under his stare. “No, you weren’t imagining that,” Lucas said slowly. “That’s really all you remember?” 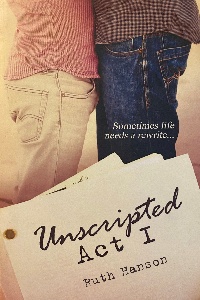