Alluring and sexy Private Maxim Nine is more than just an ex-military man. His day job is pushing papers across his desk at an insurance company. And in his spare time, he's a professional dancer.

When middle-aged Ben Enger, a party planner by trade, hires Nine to strip at a private birthday celebration, he learns a few things about the sturdy military man. Private Nine is far too handsome to study, he's currently boyfriendless, and Nine might just be strongly attracted to him for some strange reason.

As their friendly relationship grows, Ben falls hard for Nine. He can't push aside his heartfelt connection to the dancer. Is Nine a player, though, bouncing from one man to the next? Or can he become serious in a boyfriendhood relationship? 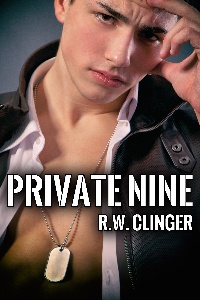 Luke lets Private Maxim Nine inside the Cape Cod. We all shake hands. Luke and I stand a few feet away from the man and do synchronized once-overs of the army dude’s hot bod. Private Nine is about the most handsome military man on God’s planet. His frame is six-two and he's not friends with a razor since he has scruff on his chin and cheeks. Sandy-brown hair that is cut in a mandatory-short, military fashion, shines from a fresh wash. His wishing well blue eyes sparkle, just as the dimple in the middle of his rugged chin. Bulky shoulders, similar to the size of a Hummer's width, and his thighs of American steel, look toned to perfection; a man who definitely knows how to take care of himself. He has a firm grip that only Superman can aspire to, and his eyes never leave ours. The man carries his sunglasses in his left hand, which he places on top of his pretty head, storing them away for the time being.

I check out his uniform: Fossil watch on his left wrist, tight olive-green tee that clings to his hulking chest, military green slacks, matching belt with a gold slide-through buckle, black shoes that are freshly polished and shiny. Luke closes the foyer’s door behind him and politely asks, “Should we have a seat and discuss our business arrangement?”

I have notes to review with the soon-to-be-hired military man as a stripper: the birthday boy’s name is Carter Dixon; he’s turning twenty-four in two weeks, a Saturday gig; a lap dance is necessary during Private Nine’s striptease; I will gladly pay the ex-army guy/stripper extra to let Carter touch his chest; the striptease can be as long as Private Nine wants; the birthday party begins at eight o’clock in the evening at The Robin Hood Inn on Route 7; I expect Private Nine to show up at nine, and not to be a minute late.

Private Nine takes me in, Ben Enger, absorbing my thirty-nine-year-old office monkey looks. I stand at five-eleven with a muscular build. My eyes are a light brown-colored; I get them from my father. I'm not one to pass on working out and sport a ripped tummy. A lot of men my age are bald, but I have a full head of ink-black hair that is curly. Single guys at the gym can tell you that I have broad shoulders and hard nipples under the everyday T-shirts I wear.

I can't stop looking at Private Nine. Maybe our hearts twist together for a second or two, which causes the world to stop spinning. We become strangely magnetic, into each other. The silence of attraction at its best work. I'm drawn to him. Chemistry at work. Maybe the gods pull us together. Something.

Private Nine shakes his head in a direct action, removes his sunglasses, and places them on a nearby Tiffany glass table to his left. “Let’s cut the bullshit, guys. I’ll show you what I’ve got. You cut half of your check today. The other half is due after my performance, within fourteen days.”

Luke looks at me. I look at him. We both turn to the stripper and say, “Bring it on, man.”