Evan has inherited his Great Aunt Enid’s apartment and doesn’t want to refurbish it, so he is looking for a quick sale, even though his partner, Faris, can see its potential. They both see enormous potential in a relationship with the totally delicious Tenealle, their every wet dream come true, despite her myriad of cousins. But which cousin tried to harm her? And why? And what is the story about the fountain?

4 STARS: "TEMPTING TENEALLE is a delicious blend of romance, eroticism, and humor with a dash of mystery. It all came together to make a fantastic menage read. Tenealle has to find a bigger place. Her "bazillion" cousins are always at her small apartment now, eating all of her food, using all of her hot water, and camping out in every available space possible. So when she finds a fixer upper in her price range, she jumps at the chance, not knowing it will change her life forever. Evan inherited an apartment from his aunt, but he can't stand to look at the place that's just a shell of the apartment he remembers when she was alive, so he wants to sell it. Besides, he and his partner Faris have a great place, and they are happy there. In comes Tenealle looking to buy the apartment. She also happens to be the woman of their dreams. So after settling the sale, they are going to sell her on a relationship with the two of them. This erotic novella was terrific. Although it was short, it had quite a bit of plot. The relationship moved along quickly but the trio spent a lot of time together, so it didn't seem too rushed. There was also a bit of mystery as someone tried to hurt Tenealle, and the guys made it their mission to find out who. I also loved that Faris and Evan romanced Tenealle. They didn't just try to get her into bed right away. They wined and dined her to show her that they both wanted her in their lives. The sex was sensual and loving. It was, in my opinion, perfect for bisexual menages. Everyone was taken care of equally. And it was obvious that they all cared about each other feeling as good as they felt. There was one particular encounter on a fountain that was very interesting even if I couldn't exactly wrap my head around the configuration! The characters were the best part of this story. The "bazillion" cousins were hilarious. Although Tenealle got annoyed, you could tell that she loved all of them. It didn't matter that Tim used all of her hot water all the time or Mark ate all of her food. They definitely gave some comic relief to the story. To sum up, TEMPTING TENEALLE pretty much had it all: great characters, titillating sensuality and sexuality, and an interesting plot. I loved they way the author wrote her menage, and I'm now going to search for more stories by Berengaria Brown!" -- Rho, The Romance Reviews

By the time Faris reached the office, Evan had opened the door and was standing, dumbstruck, in front of the most gorgeous woman Faris had ever seen. She was tall for a woman, about five-eight, with a lush, curvaceous body, huggable hips, suckable breasts, and sparkling chocolate eyes. And, holy hell! Red hair. Goddamn it, she was everything Evan had asked for, and more, wrapped up in the most enticing package Faris had ever seen.

His cock woke, stretched, and damn near burst out of his pants at his first sight of her. He was hard enough to pound nails, ready to push her up against the nearest wall and fuck her, and he hadn’t even spoken a single word to her yet! Where the hell had that come from?

Noticing that Evan seemed totally incapable of social niceties due to shock, he punched the other man on the arm, then held out his hand. “I’m Faris Barker, Evan Schmidt’s partner. I’m guessing you’re Tenealle Jones. Great to meet you, Ms. Jones.”

“Please call me Tenealle. I see what you mean by ‘needs some care,’ but I like the proportions of this room.”

Evan still seemed to be totally gobsmacked, so Faris explained. “Evan’s great-aunt Enid has lived here for a very long time. Originally she and her husband ran an accounting business out of these few rooms and lived in the rear apartment. There’s a small bathroom through here.”

Faris opened the door, and Tenealle walked through. He tried to see the room through Tenealle’s eyes. It had a toilet, shower, and sink and hadn’t been used much for some years. The ceramic ware was a little stained, but it might scrub up okay. Or maybe she’d want to replace it with a dual-flush model. If it was up to him, he’d retile the room in sunny yellow and cool blues.

Evan had pulled himself together now and began describing the apartment’s amenities—security, privacy, a well-run building in a reasonable neighborhood. Then he showed Tenealle the smaller internal office. She pulled out a notepad and sketched the rooms, marking in electrical outlets and built-in cupboards.

“No worries there. Great-Aunt Enid was quite computer savvy, and she had cable TV. Whatever you want should be good.”

The scrumptious redhead paced around the two rooms and made some more notes, then followed Evan down the hallway to the living area of the apartment.

“Both these doors have secure locks on them, so no one can get into the apartment without keys while you’re in the office,” pointed out Evan as he opened the apartment door, then waved back toward the door from the office area.

“This hallway runs the length of the interior courtyard and garden, which is only accessible from the apartment.”

“The office has no external windows for security’s sake,” added Faris, “but there’s lots of natural light in the apartment.”

“I like that it’s secure, but I’m not a wimp. I’ve been living on my own for ten years now,” said Tenealle. Then she muttered something that sounded like, “Apart from when a bazillion cousins descend on me.”

Evan walked Tenealle through the apartment’s two bedrooms, the large bathroom between them, a comfortable kitchen with dining area, and the spacious living room opening out into the garden courtyard.

Tenealle wrote page after page of notes in her little notebook, paced out room sizes, checked for cupboards and electrical outlets—what was her hang-up with them?—then strolled around the garden.

Faris trailed behind them, noticing the way her delicious ass flexed as she moved, how her lush hips swayed, and the way she smiled at him and Evan whenever they caught her gaze. She smiled with her whole face, not just her eyes, and it lit up with pleasure and happiness.

Damn, but she’s hot. Hotter than hot. Hotter than hell. Oh, how I’d love to get inside her pants. I wonder if she’s wearing panties? There’s no visible panty line, and those jeans are welded to her skin in all the right places. Damn. Gotta get my mind off her ass before my dick breaks my zipper.

She couldn’t help but notice both men’s cocks were ready for action again. Evan’s penis was wider and a slightly darker color than Faris’s—like his body, his cock was long. But Tenealle had no complaints about Evan’s equipment. He’d filled and stretched her pussy in the most delicious way and given her an excellent orgasm.

“Now lie on your backs and let me play,” she ordered them.

“What do you plan to play?” asked Faris curiously.

“I’ll think of something,” she replied, moving over to a large chest of drawers. The first drawer held socks and briefs, which she ignored. But the second had neckties and other male accessories she rather thought could be fun.

Tenealle grabbed a handful of neckties and gently bound their hands together, then tied the two men together by using a few neckties to loop their manacled hands together.

“I must be doing something right,” she murmured.

Faris nodded and wiggled his hips.

Tenealle rubbed her wet pussy up and down their thighs, then rotated herself to sit across their bellies so they couldn’t see what she was doing.

She tormented them, gently stroking their thighs and groins, even occasionally touching their balls or shafts very lightly, but never giving satisfaction.

By now both men were frantically thrusting their hips up at her, desperate for fulfillment. Tenealle decided she had teased them enough. Besides, she was longing for a taste of them both.

She gripped a cock firmly in each hand, sliding her fist up from root to tip, reveling in the sensations of strong muscles inside soft skin. Again and again she stroked them, adding an occasional twist to her grip, before leaning forward to suck first Evan, then Faris, deep into her mouth.

Next, she played with their balls, rolling them inside their sacs while licking across the cock heads. Finally, she settled down to seriously suck them, a hand on each shaft, holding it firmly and stroking it while she sucked first one, then the other, rubbing along the thick, ropey vein, running her tongue under the sensitive ridge of the caps, and scraping her teeth gently over the two cock heads.

Tenealle was enjoying herself very much, concentrating on pleasing her men, loving the urgent upthrusts of their hips, when four hands grabbed her and flipped her over. A condom appeared from nowhere, and Faris was pushing deep into her cunt.

“What the hell?” Her brain was reeling with the sudden change of game plan.

“We untied each other. It’s time for us to take charge,” said Evan, kneeling beside her head and offering his red and needy cock to her lips.

Faris held her hips still while she opened wide to accept as much of Evan into her mouth as she could take. Tenealle tipped her head right back, opening the back of her throat, and swallowed his cock head.

God, he felt good, and so did Faris in her pussy. When Faris pushed right in, he almost touched the mouth of her womb, he was so long.

The two men controlled their strokes, pushing in and pulling out simultaneously, quickly driving Tenealle to a place where she lost all power to think and could barely remember to vary her sucking to give Evan pleasure. Faster and faster the men thrust, pushing into her hard and deep. Tenealle clenched her pussy muscles and sucked hard, running her tongue under the ridge of Evan’s cock.

Fingers pinched her nipples. A fingernail scraped across her clit, and an orgasm exploded from her pussy, her clit, her breasts. The power of her climax made Tenealle shake all over. Desperately she sucked on Evan, wanting him to come too. Again she ran her tongue under the sensitive cap of his penis, then pressed her tongue along the vein of his shaft, rubbing up and down, before sucking him as deep as she could once again. 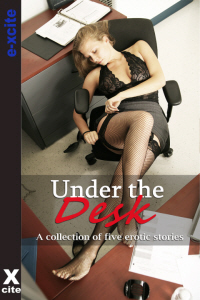 Under The Desk
Miranda Forbes
In Shelf
$4.59