Married to her job, cop Christine McCall wants to find the murderer of her best friend and partner, David Williams. Pushing aside the guilt she feels at not being able to save him from death, Christine reluctantly agrees to allow Drake Haaken, owner of the BERSERKER club where David had been killed, to help with the investigation.

Thrust into a world that she never knew existed, Christine is torn between her human loyalty and vampire love. The choice she makes may end her life.

4 ANGELS: "Christine McCall and her partner David Williams are at a club called Berserker, trying to find leads to the murders that have occurred in Beaumont in recent weeks. David decides they need to split up to see what they can find out. Christine is very uncomfortable doing so because she doesn't feel comfortable around people. Her mother was a crack head and her last relationship was with an abusive person that kept telling her how ugly and horrible she was, making her anxious around people. She's looking around and sees a man with the most beautiful grey eyes staring at her. Drake Haaken introduces himself to Christine and from the first moment she meets him, she feels like he could read her mind and hopes he doesn't know what she's thinking because there's some pretty erotic thoughts running through her mind, which isn't like her at all. While they're dancing, there's a scream that someone has been murdered in the alley behind the club. Running outside to find out what was going on, Christine finds her partner lying in the alley dying. Drake, she soon finds out, is the owner of the club and they decide to work together to find out what is going on and to find the killer. Christine soon finds herself in a world she never dreamed existed and has to make some decisions. Will she have to choose between David and her vampire lover? I started reading this book and didn't put it down until I was finished it. The book has a great storyline, not to mention some pretty hot sex. I believe it is the third book in the Bloodborn Series. I would have never guessed that it could also be read as a standalone. After reading this book, I do plan to read the other books in this series and I will keep Tracy L. Ranson's books on my books to read list. Great job Ms. Ranson, I'm looking forward to the next one." -- Dee, Fallen Angel Reviews

“Do I frighten you?”

A smooth, silky male voice broke through her thoughts and sent a bolt of electricity dancing up and down her spine. She snapped her eyes open amid her slightly ragged breath. The handsome stranger stood before her, much taller than she imagined. She swallowed the lump in her throat. “Not all at.”

“Good because I do frighten a lot of people.” He swept into a low bow. “Drake Haaken at your service.”

She detected a bit of an accent in his words, but she couldn’t place them. A part-time student of linguistics, she normally could place any lilt, but this one escaped her.

“Thank you, Mr. Haaken, but I really must be going.” Her throat constricted the closer he came, the smell of his musky aftershave overwhelming her no end. Her sex wanted to cream inside of her panties. She’d have to get out of here really fast before anything happened.

He clamped a hand on her arm. “Do you really?”

Bolts of strange desire rumbled up her  limbs and stretched out the rest of her body, awakening every inch to his burning touch. She looked down at the strong fingers wrapped around her arm, unhappy with his uninvited clutch. One thing she hated in life was to be touched by people she didn’t know. “Please let go of me.” Quietly, he released her. “I must be going. I have an early day tomorrow.”

The sexy half smile returned, accompanied by a quick jerk of his left eyebrow. “Don’t leave before telling me your name.”

“Christine McCall.” Her open jaw shut. She had inexplicably defied department protocol. She’d never given her real name on any of her assignments, and she wasn’t sure why she did now except a strange feeling compelled her to.

Her nipples puckered beneath the lacy cups of her bra, the hard points pressing hard against the fabric. Thankfully, she’d decided to wear a bra with a slight bit of padding. Otherwise, this stranger could read her desire as easily as he would a book.

“Well, Ms. McCall, it seems as though we’ve got a problem here.”

The weakness in her legs barely kept her standing. “What is that, Mr. Haaken?”

“Music is playing, and we’re not dancing to it.”

Christine vacillated between dancing with him and getting the hell out of Berserker. She didn’t belong here, that much she knew. But dancing with a man who appeared as though he stepped off a romance novel cover definitely did not fit her at all. “I don’t dance.” She spoke the truth. Jason never took her dancing or actually anywhere really. He preferred to sit at home and mentally abuse her.

His warm, silky baritone voice provided all the impetus she needed to leave. She didn’t want him to have the chance to be disappointed in her lack of rhythm.

Before she could utter another sentence, a warm blanket of security washed over her. She relaxed her tense muscles a bit, almost as if those very words eradicated every ounce of anxiety out of her.

Mr. Haaken grasped her hand and led her to the dance floor. The music changed to a very low, methodical beat great for slow dancing. Dancers cleared the way for them, parting like the Red Sea.

He guided her to the middle and took her right hand in his left. For a brief moment, she thought he’d take her into an old-fashioned-dance embrace reminiscent of a waltz, but apparently, he possessed other ideas.

His thick arms wound around her and held her to his hard form. She wanted to run away from him, get out from under his touch, but some unbidden force enticed her to stay. His hand slid up her back, his chilly palm spanning the width, almost as if he attempted to keep her from running.

“This feels good, doesn’t it?”

“Yes,” she heard herself say in a throaty whisper. Where did that come from? After Jason, she never wanted any man’s touch, but she inexplicably craved this stranger’s.

“I want you to call me Drake,” he whispered into her ear.

Christine trembled against him and laid her head against his chest, closing her eyes. Her better senses told her to run yet being this close to a damned good-looking man felt wonderful. “Drake then.” The silkiness of his white shirt brushed against her face like the softest swan’s down. Tendrils of his blond hair brushed against her cheeks, silky and soft.

Drake’s black leather pants rustled against her miniskirt, the thick bulge poking in her belly unmistakable. She knew what he wanted, what all men wanted eventually.

“You are a beautiful woman, Christine. Why don’t you come with me for a private drink?”

Drake touched her inner thigh for a minute and waited for her reaction. He expected her to push him away, but she didn’t. Taking her silence as an invitation, he swept higher up the soft, smooth expanse. Surely, she would make him stop before he went too far. She didn’t.

Damn, she made his cock hard! He went a bit farther and touched the damp crotch of her panties. With his superior senses, he could smell her desire for him, her body pumping out the delicious juice needed to clear the way for him.

He paused at the tight elastic. Still, she didn’t stop him. Good. His prize lay behind the brief expanse of wet fabric.

Hooking one finger through the elastic of her panties, he had them off in a flourish and casually dropped them to the floor. Christine didn’t balk at this either.

Drake slid his hand back up her thigh. Her shaved pussy greeted him like a beacon, soft, smooth, and soaked. He touched the quivering lips and Christine gasped, her hips rocking.

He touched her delicious smelling sex, drawing a finger up the damp crevice. Flesh parted, slick and ready.

“Yes,” she moaned against his mouth and lifted her hips. “Touch me.”

He’d do better than that. He slipped on finger inside of her. Instantly, her cunt slammed down on his finger and held it hostage. He groaned and tucked another finger next to the first one. She widened instantly and sucked him deeply inside. Unable to stand the resistance, he stroked in and out, pumping like a piston. She creamed against his fingers as he thrust.

“Faster,” she begged in a strangled moan.

Never one to shirk a request, he increased his actions. Christine lifted her hips, begging for more. Well, he had something special in mind for her.

Slipping to the floor, he urged onto her back on the couch. He hooked her right leg over his shoulder, the left on the back of the couch. Her desire drifted from between her legs, peppered with a musky, wanton scent. His cock was rock hard, but after several hundred years, he’d learn to control himself.

Christine felt so desired and wanted in this moment that she wanted it to last. Drake had been so tender with her and seemed so compassionate that it didn’t feel wrong to be here with him like this.

The rough pad of Drake’s tongue traced up and down both sides of her labia, lapping up all her juice. His giant thumbs held her open, exposing her for his use. Strangely, she liked this situation. Jason had never performed oral sex on her, and he never wanted her to. He said she was lousy at it.

Drake blew a cold breath over her clit, and the blossom stood at attention, swelling not just with blood but lust as well. She shivered and lifted her hips, offering more.

“What a wanton wench you are.”

He chuckled softly and covered her pussy with his mouth. His tongue danced up and down her sex, tasting her dew. He nibbled a bit on her clit, taking the nub gently between his teeth then let go. Flick. Suck. Flick. Suck. She shuddered as the familiar burn of orgasm curled in her belly. Dear Lord, she was ready to come!

The burn turned to a full, roaring flame. Fire licked up her limbs and spread with the quickness of a harsh summer storm. She cried out as her orgasm blew.

Drake tenderly kissed the inside of her thigh. “You were saying something about ground rules?” 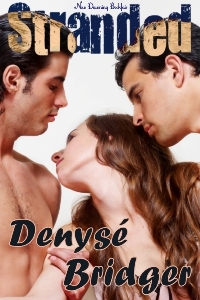 The Librarian and the Dragon (MM)
Marcy Jacks
In Shelf
$4.50
Tweets by
sirenbookstrand